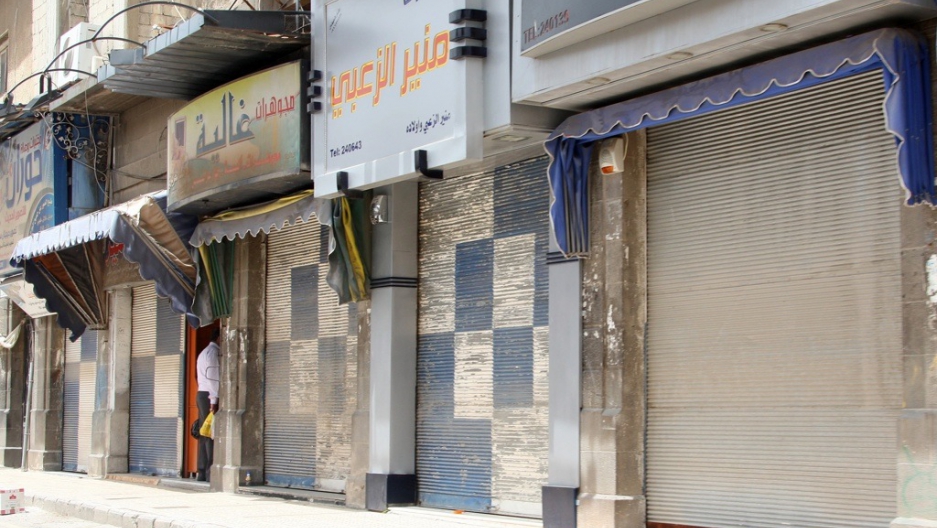 DAMASCUS, Syria — As parts of Syria suffer the effects of the regime's vicious military assault, Damascus is a city looking on. A faltering economy, however, has put many thousands out of work and daily life is slowly deteriorating.

The most widespread sight on the streets of Damascus these days is the plastic sheeting that covers miles of pavement. Sheltered from the rain, underneath men sell cigarette lighters, pirated DVDs and trinkets. The customs police that once hounded such illegal peddlers are nowhere to be seen. It is a sign of what has become a wider breakdown in organized economic life in the capital.

Recent explosions at several fuel pipelines in the Homs region have severely disrupted supplies of diesel, particularly to the huge generators providing electricity to Damascus and to dozens of towns around the capital.

The price of petrol was increased by 10 percent in December and taxi meters have not been updated accordingly. The result has led to outbursts of fighting and arguments between drivers and passengers in a city already fraught with tension.

But other, more pressing concerns occupy the minds of most of Syria's 23 million people.

The cost of eggs, milk, sugar and cigarettes have risen by as much as 80 percent. There is a notable increase in the number of begging children in the streets of the capital. And schools are regularly closed several days a week because of state-organized rallies.

Last week a run on bread, the staple food in Syria, caused major panic in the capital and saw the price shoot up 100 percent for two days before receding.

"With all this instability people react en masse to the slightest rumor," said an accountant in Damascus who blamed a lack of state planning for the shortage of flour. The price of bread is subsidized by the Syrian government.

In Syria's massive public sector, there have been no salary increases since last March.

"The price of everything has increased by at least 50 percent," said an employee at the Syrian Central Bank. "But our salaries have stayed still."

In the past, increases for state employees were often given bi-annually: one after the holy month of Ramadan and a second at the year's end.

Trade in the once-booming Hamadiyeh Souk, a busy market and tourist attraction in central Damascus, has effectively halted. Today, store owners sit outside their shops drinking tea, lamenting the absence of Iranian and western tourists. Carpets and trinkets laid out in alleyways only gather dust.

Iranian tourists visiting important Shiite sites in the Old City of Damascus provided vital business for local merchants. Last week the head of the Iranian passports and immigration police announced that Iranian bus tours to Syria were to be forbidden because of the worsening security situation.

Meanwhile, several rounds of international sanctions placed on individuals and businesses with ties to the regime have not yet managed to topple, or even weaken it to any discernible extent. Soldiers are still constructing dozens of high concrete walls around military and security facilities. Millions of Syrian lira, the local currency, are being spent on reinforcing the state television building and other important sites in the capital. The economic sanctions introduced to squeeze the Syrian regime have so far only hurt ordinary citizens, not those they intended to hurt.

Since the unrest fist took hold in Syria last March, the value of the Syrian lira has depreciated by almost 50 percent against the dollar. Imported foodstuffs such as cereals and chocolate have increased by more than 100 percent since December. For hundreds of import-export businessmen, their trade has collapsed.

More from GlobalPost: Homs attack is a game-changer

"We are just waiting for the regime to fall," said one man who imported generators from Turkey before the uprising.

Still, the Sham City Center mall in the upscale neighborhood of Kafr Souseh in Damascus was teeming with people on a recent Thursday evening. Families clambered for seating in the mall's underground food court.

"People come here in the evening to escape the news on television, which is depressing, and in any case, they have no electricity at home," said one shopper. "But I think very few are spending money on more than sandwiches."