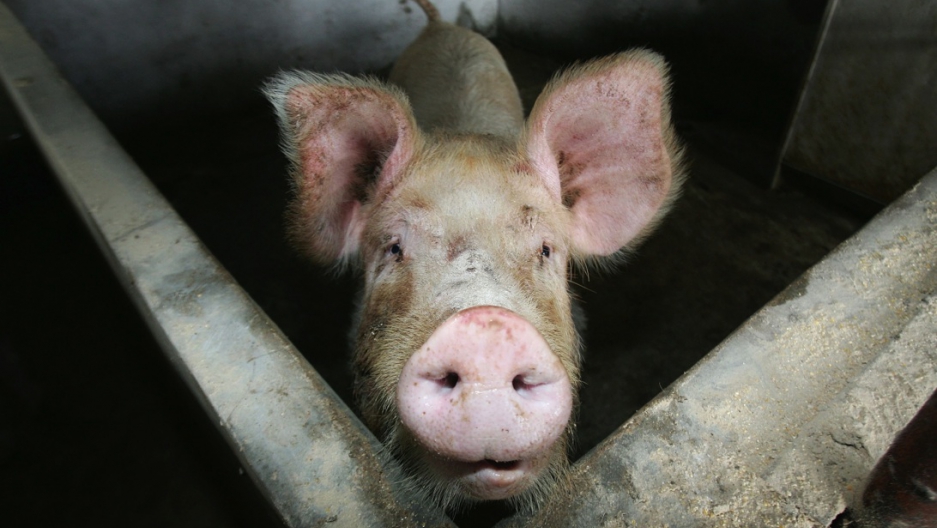 A pig at a pig farm in Lishu County, Jilin Province in northeast China, January 17, 2008. Pigs in the Midwest are having a tougher time, thanks to a mysterious exploding foam on some farms.
Credit: China Photos
Share

Pig farming doesn't have a lot going for it, aesthetically.

There's the pollution and waste.

There's all the slaughter, of course.

And now, apparently, there's the mysterious foam that traps methane and then explodes, killing thousands of pigs and injuring humans.

That's the word out of Minnesota in a story that's been making the rounds today on the internet.

Here's the scoop, according to the Minnesota Daily.

According to the article, pig farmers in the Midwest have noticed a grayish foam on their manure pits.

Not just any foam. Foam that can reach up to four feet high, and then explodes on contact with a spark.

The strange stuff has destroyed at least a half dozen pig barns since 2009.

It's still a mystery, though some early theories are emerging.

"The researchers still aren’t sure what causes the foam," the Minnesota Daily writes. "But they have noticed a correlation between adding dried distillers grains in soluble — a product of the ethanol production process increasingly used in livestock diets — to the hogs’ diets and the foam."

Scary and apocalyptic thoughts aside, this is also an important business story.

Minnesota's pig industry alone is worth a billion dollars a year, and there are pig farms across the Midwest.

The mysterious explosions have so far cost farmers millions of dollars in lost pork, clean-up costs and insurance.