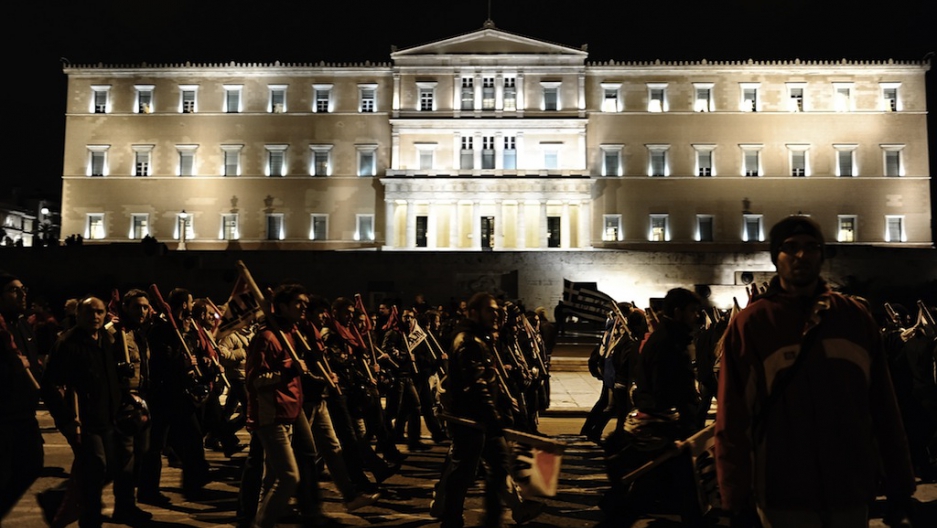 Greek unions ordered a 48-hour general strike after the country's cabinet passed a package of austerity measures demanded by the "troika" - the European Union, the European Central Bank, and the International Monetary Fund.

Passage of the austerity measures, which included cuts to pensions and the minimum wage, was necessary to release $170 billion in bailout money, the New York Times reported. However, the expected disbursement did not come, Reuters reported.

CNN reported that central Athens is shut down and thronged with at least 13,000 people, and the number is rising.

Greeks have faced difficulties implementing promised austerity packages before, and disagreement over cutting pensions created a $430 million shortfall. Proposed additional cuts to pensions were the main "stumbling block" in the new deal, according to the BBC.

Some of the promised austerity measures: the elimination of 15,000 public jobs, relaxing labor laws, lowering of the minimum wage, and pension reform. Unemployment in Greece, which is in a deep recession, is at 20 percent.

More from GlobalPost: Greece: 15,000 public-sector jobs to be slashed as debt crisis continues

"Greece hasn't done up till now what the IMF has asked it to do," German Finance Minister Wolfgang Schaueble told CNN on Wednesday. The BBC reported that while European leaders are focused on saving Greece, "there is more and more talk on the margins that a Greek default would not be a disaster."