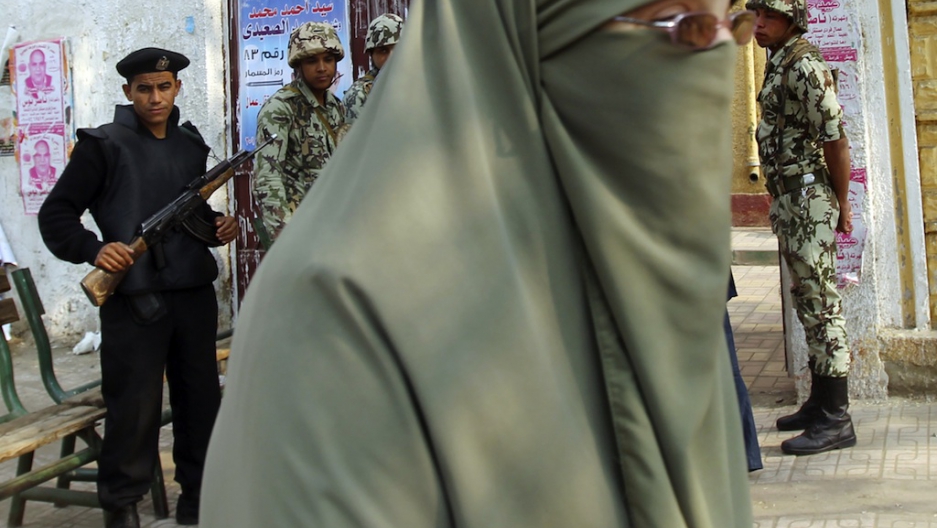 A woman wearing a full Islamic veil walks on front of Egyptian police and soldiers. Pro-Islamist students this week shut down a television production because the actresses were dressed indecently.
Credit: KHALED DESOUKI
Share

A group of Islamist students managed to halt the filming of a new television series at an Egyptian university after protesting over the "indecent" clothing worn by the actresses, AFP reports.

The production company, Misr International Films, said it was forced to leave Cairo's Ain Shams University after students belonging to the Muslim Brotherhood, an Islamist organization whose political arm now holds the most seats in parliament, said they refused to allow the filming to move forward if the womens' costumes were not changed.

According to AFP, the series is adapted from the novel "Dhat" by Egyptian author Sonallah Ibrahim, and takes place in the 1970s, when many Egyptian women wore less conservative clothing.

Egypt is also the television and cinema hub for the Arab world.

But it is also a largely conservative country, and a sweeping legislative victory for the Islamists in recent elections raised fears among liberals and secularists that Muslim law-makers would roll back rights protecting women and religious minorities.

While the parliament, inaugurated just last month, has yet to legislate any Islamic laws, many feel the Islamists are already emboldened -- and all they will need is a bit of societal pressure.

Earlier this week, a member of parliament from the Salafist Al-Nour party broke protocol and recited the Muslim call to prayer on the assembly floor.

Reporting from Alexandria, a Salafist stronghold, for Egypt's first round of parliamentary elections in Nov. 2011, I spoke with a Salafi community organizer, 42-year-old Adl Taha, in the seaside town.

"The people love Islam," he said. "They want to be ruled by Islam."