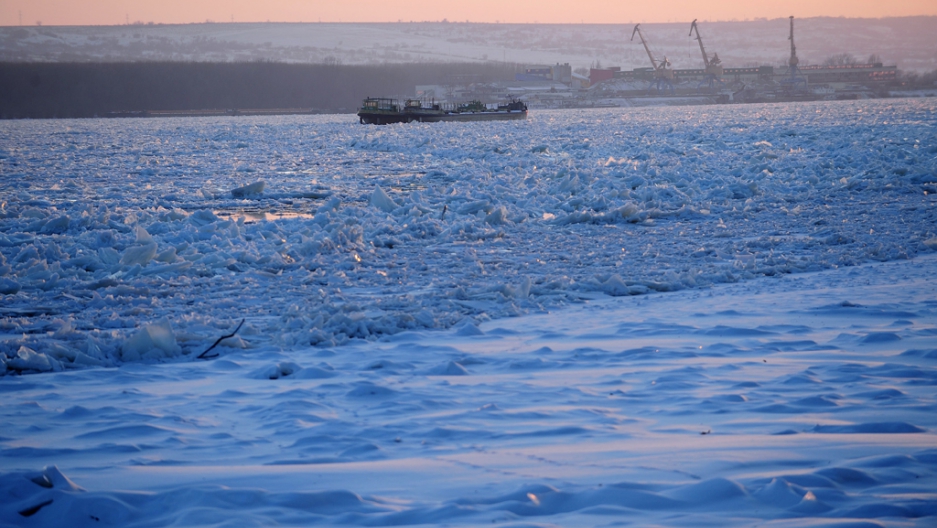 A ship is seen on a frozen Danube branch in Calarasi city, 110km east from Bucharest, on February 10, 2012. The river began to ice over in early February as temperatures plunged to minus 20 Celsius. AFP PHOTO/ DANIEL MIHAILESCU
Credit: DANIEL MIHAILESCU
Share

The cold snap in Europe continued, freezing the Danube River for the first time in 25 years and disrupting the commerce that it usually handles, said CNN.

The unseasonably bitter winter that has swept across Eastern and Central Europe for the past two weeks has claimed at least 460 lives, according to AFP.

The Danube, which flows through 10 countries, serves a vital commercial purpose for transport, irrigation, industry and fishing, but it was either completely or partially frozen from Austria to the Black Sea, according to AFP.

The Associated Press reported that European shippers claim to be losing millions because of the freeze. Barges, boats and ships were caught in the ice, which started forming in early February in minus 20 Celsius (-4 Fahrenheit) temperatures.

More on GlobalPost: Flamingos freeze to death in France from cold snap (VIDEO)

AFP said navigation was either restricted or impossible in long stretches along the Danube in Serbia, Croatia, Bulgaria, Romania, Hungary and Austria. Serbian infrastructure ministry official Pavle Galico told the AFP that shipping may not resume for 10 days.

CNN reported that Ukraine is among the worst-affected countries during the cold snap, with over 100 deaths and at least 3,000 seeking treatment at hospitals.

Forecasters expected another weather plunge over the weekend, to as low as minus 30 Celsius.