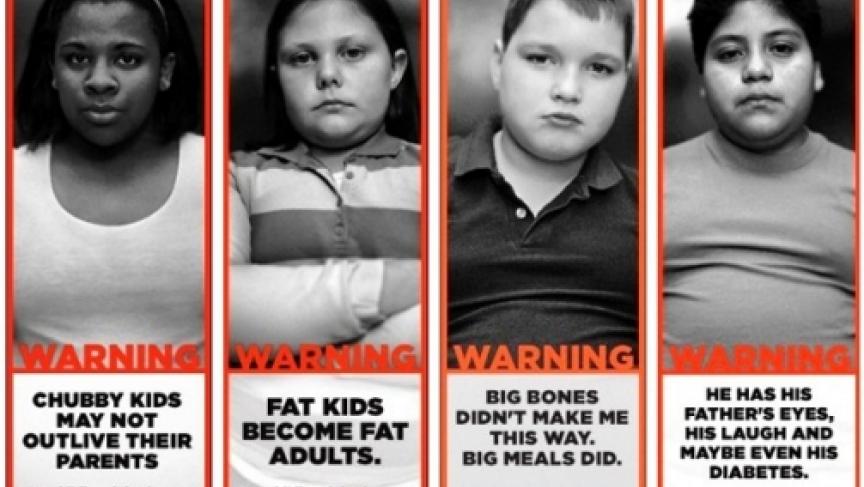 These ads from the Strong4Life campaign in Georgia have drawn a controversial reaction, with some saying they're what we need to shock parents into paying attention. Others say they're just shaming kids who are overweight. (Photos courtesy of Fa

Approximately one-third of adults and 17 percent of children in the United States are obese.

The hospital launched a billboard and digital campaign featuring obese children with derogatory narration and captions. The ads are powerful, but they’ve also been criticized for stigmatizing overweight children.

Dr. Mark Wulkan, surgeon-in-chief at Children’s Healthcare of Atlanta, who served as a consultant on the ads, said when Georgia was labeled the state with the second biggest problem with childhood obesity, the hospital decided they had to do something.

"When we look at the steps people need to make a change, and break it down, the first step is awareness," Wulkan said. "We did model it after campaigns like scared straight."

Wulkan said Georgia had a successful anti-meth campaign previously that also served as an inspiration.

Research in the community led the hospital to this specific course of action. They found that 75 percent of the parents of children who are obese were not aware that their children were overweight or obese.

"This was very shocking to us," Wulkan said. "This is just the first part of a whole movement we call Strong for Life. The first step is awareness and intent to change. And then we get to the steps we need to take to make those changes."

That phases is just starting now.

Abby Ellin, author of “Teenage Waistland: A former fat kid weighs in on living large, losing weight, and how parents can (and can’t) help,” said she felt confused by the ads.

"I don't know what the goal is," she said. "I don't know how showing pictures of these fat kids — and having them talk with the headline 'It's hard to be a little girl if you're not' with a child with her arms crossed looking very bleak — I don't know quite how that's going to help anybody or motivate anybody to start losing weight or be inspired to get healthy."

Ellin said most people she's talked to, and she's written a lot on childhood obesity, know they're fat, know they have a weight problem.

In certain communities, heavier is OK, so long as everyone is healthy, she said.

Wulkan said the problem is hospitals are starting to see more and more children with weights that simply aren't OK, and that have never previously been seen in kids before.

"These were adult diseases, and I don't think a lot of parents know my overweight 10-year-old is at risk of having serious health complications now — not 40 years from now — from their obesity," Wulkan said.

Unfortunately, Ellin said, she thinks these ads won't do anything to address that problem and will only stigmatize the overweight kids.

"I think it's just causing other people to look at these kids and poke more fun at them," Ellin said.

But Wulkan said that the ads, their research shows, are both effective and supported in the communities where they've been put up, around Georgia.

"There's a very vocal minority that's concerned about them, and we respect them and appreciate their concerns," he said. "But the ads have been very effective at getting the message out."

Ellin, though, wants to see ads that hold the parents responsible.

"Let's have the parents take some responsibility here. They're the ones being targeted, so why are we doing it with the kids," she said.