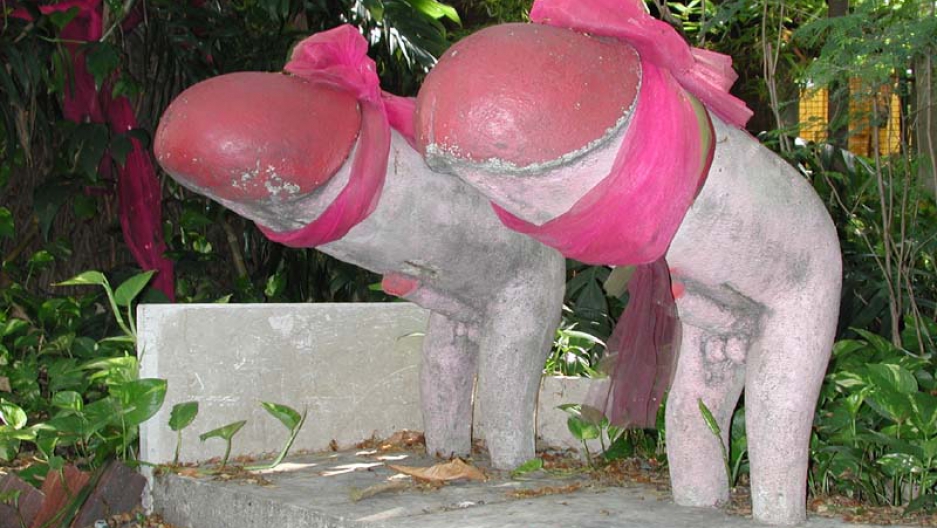 Hundreds of wooden and stone penises rest at the Lingam Shrine in Bangkok. Locals have been bringing them here for centuries to thank the universe for the miracle of conception.
Credit: I. Roze
Share

It’s been a while since I got anywhere near a seven-foot penis.

The last time that happened I was in Bhutan, where I reported on the Buddhism-inspired phallic imagery locals there paint on their houses to ward off evil spirits.

You'll find similar phallic warship rituals in Japan, too, as reported by GlobalPost in a story and photo essay on penis and vagina festivals.

Since it’s almost springtime, it was about time I made another pilgrimage to pay my respects to the penis.

After all, if it weren’t for a global fascination with the phallus, I would have to find another way to make a living.

So today I went to the “penis shrine,” as the Lingam Fertility Shrine in Bangkok is colloquially called.

It's a small wooden structure tucked behind a giant glass building of the Swissotel Hotel. I found myself in this secluded spot, in the shadow of banyan trees, surrounded by some three hundred wooden phalluses ranging from lifesize to seven feet long.

The Lingam Fertility Shrine, if the name isn't obvious, is the place locals come to pray so that they can conceive children.

The setting is surreal. If I was a marketing director for Swissotel, I would capitalize on the hotel’s location and design a special “penis shrine view room.” You could set up couples with champagne and charge them as much as an average IVF cycle.

The shrine was originally dedicated to Chao Mae Tuptim, a female animist spirit who — locals believe — has been residing in the banyan tree next to the shrine for centuries. One day, the story goes, a woman came to the shrine asking for help from Chao Mae Tuptim because she couldn’t get pregnant. Nine months after visiting the temple, she gave birth to a healthy child. She was so grateful, she came back and left a giant wooden carving of penis as a way to thank the universe.

Over the years, others have followed in her footsteps. If you visit today, you will see hundreds of phallus-shaped objects, made mostly from wood and stone.

Some have bows tied around them for protection, others are dyed bright red, blue or green. All of them, however, are here with the same premise: You offer up a penis, and you, too, may undergo the miracle of conception.

I am not quite sure this is going to work on me, though.

It’s not the first time I've been blessed by a phallus and so far, no babies.

In Bhutan, for example, a monk personally blessed me by tapping a giant wooden penis on my head and I never got pregnant.

Then again, the miracle of conception apparently doesn’t work so well if you're taking birth control pills at the same time.