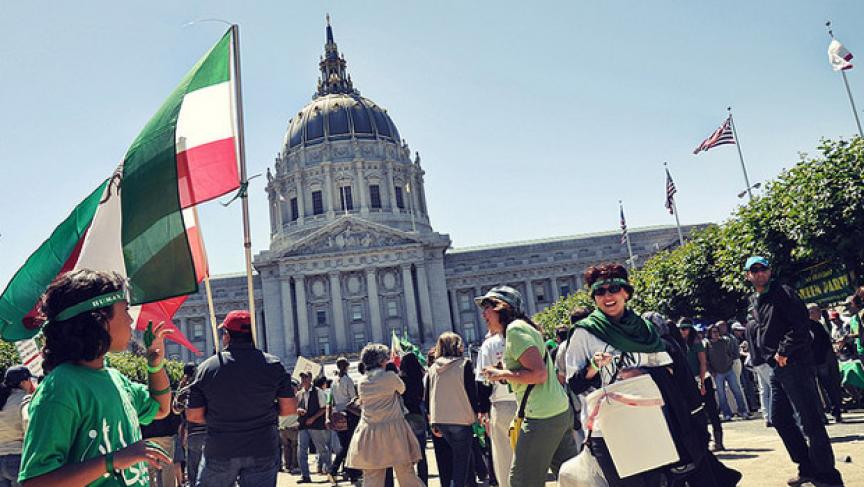 Share
Thousands of refugees flee to the US each year from Iraq and neighboring Iran. The vast majority of them resettle in California. As with many refugees, Azin Izadifar carried memories of violence and trauma with her to the US. She lives alone now in a small studio apartment in San Jose, Calif. When she first moved to the US in 2009, the troubled memories of her life in Iran followed her. "At a certain time during the night I would wake up shouting. Like, having nightmares. I always always had this problem," she said. Izadifar was arrested for participating in secret meetings during Iran's 1979 revolution, and spent the next three years being tortured in Iran's notorious Evin prison. She continued to have run-ins with the Iranian government after her release, so she sought asylum in the US. Izadifar found that even though she was in America, and "safe," life was difficult. But cultural and practical barriers kept her from seeking help. She eventually saw a therapist, and was diagnosed with Post-Traumatic Stress Disorder, or PTSD. She said she sees the same PTSD symptoms in new Iranian refugees -whether or not they did time in jail. And most of them, she said, aren't seeking therapy. "There's a tendency in our culture to underestimate that and say, 'Okay, that was passed. Now we are in a free society. We have to live our lives. We have to buy a car and get a job and just be normal,'" she said. Jasmine, a 24-year-old Iraqi refugee, said she's all too familiar with that cultural resistance to getting mental health care. In fact, that's why she didn't want to give her real name. She was diagnosed with PTSD, and doesn't want the Iraqi community in San Jose to ostracize her family if they found out. Jasmine fled Iraq with her family after insurgents killed her father in a drive-by shooting. They escaped to Syria, then resettled in San Jose three years later. And that's when depression hit her hard. "You left your home. You left the like place that you belong to. You left your people who loved there. Even like, sometimes I feel like everything's like for me after I left Iraq is different. Even like a rose, the air, the dust. I know back home. The dust of back home. The air of back home. I know back home. The dust of back home. The air of back home," she said. It's not just that refugees miss their homelands. Most have been exposed to violence and trauma unheard of in the west. In the United States, you would go to a therapist. But many in the refugee community would never think that way, said Sally Sharrock, a former therapist with Centers for Survivors of Torture. She said they're more likely to go to a family member for help, or a medical doctor. As part of the refugee package, people are entitled to medical and mental health care. Families with minors get five years of free social services. Refugees without kids get only eight months of services free, then they're generally on their own. Either way, Sharrock's job was to get people into counseling, and to keep them coming back after their first session. Sharrock said her stealth sessions often begin with her giving practical support. "So a lot of people are really actually more interested in really being able to find a job and support their family and find good housing," she said, "before they're ready for any kind of psychological supportive services or therapy." As she begins addressing mental health issues with refugees, Sharrock said she avoids using terms that might be associated with a mental illness, like "depression," or "anxiety." She said she's found that one term seems to work across the board. "Often times we find the word "stress" works for people," she said. "I may then ask them how they've been affected by stress, how they've been coping with it in their own culture up until now. And our conversation will kind of progress from there." Centers for Survivors of Torture uses other methods to bring in refugees to their office, like hosting potlucks and educational seminars. To make that approach work, they rely on other refugees in the community, like Jasmine. She now goes to Iraqi cultural events, handing out Arabic-language pamphlets about the free therapy at the Center. "The whole situation in Iraq not normal. So we need like, more programs for mental health," Jasmine said. Jasmine said helping other refugees like her makes it easier to heal the wounds of her own past trauma.