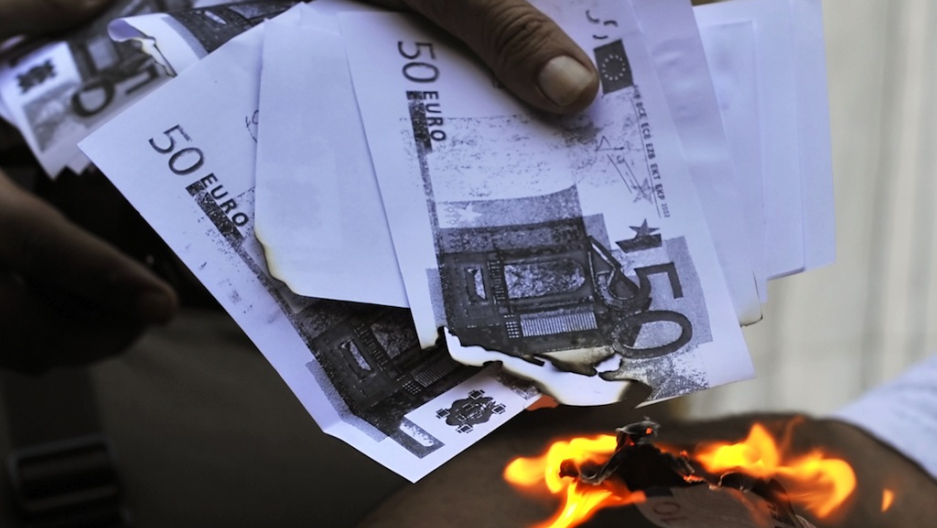 A protester sets fire to copies of euro notes in Athens. Many Greeks are angry over the austerity measures their government has imposed to secure bailout funds.
Credit: LOUISA GOULIAMAKI
Share

BERLIN, Germany — It doesn’t get much closer to the wire than this.

Heavily indebted Greece was facing a chaotic default if it doesn’t secure another bailout, but its politicians had balked at agreeing to tough austerity measures that are a precondition for the 130 billion euro rescue ($172 billion) fund.

Now they have finally reached a deal.

For days, the leaders of the parties backing Greece Prime Minister Lucas Papademos’ technocratic government have resisted signing up to the deal. On Thursday afternoon they finally relented, agreeing to major cuts in wages, pensions and spending as well as massive layoffs in the public sector.

Read more: ECB to the rescue

The troika of international lenders — the European Central Bank, the European Union and the International Monetary Fund — have insisted that Greece needs to reduce its current deficit of 160 percent of GDP to a more sustainable 120 percent by 2020.

Time is of the essence, as a bond repayment worth 14.5 billion euros is due on March 20, and EU officials insist that the paperwork needs to be set in motion by February 15 at the latest.

The Greek government has also been holding parallel talks with private creditors aimed at slashing 100 billion euros off its debt in the form of a debt swap deal. The lenders have insisted that the bailout deal be confirmed before they agree to taking an almost 70 percent haircut on the Greek bonds they now hold.

Read more: Grim humor in Greece: God gave up on us

The green light from Athens means that the Eurogroup, the euro zone’s finance ministers, can finally meet in Brussels to approve the bailout. The gathering had originally been scheduled for Monday but was postponed in the absence of a deal.

The 17 ministers will now discuss the details of the second Greek bailout, which would follow a 110 billion euro rescue package in May 2010, and the restructuring of the privately-held debt. They will study a report drawn up by the IMF on Greece’s long-term economic outlook. With the Greek economy continuing to contract, it is anticipated that the 130 billion euro bailout will not be enough to plug Greece’s financing gaps, and that it may need another 15 billion euros.

The ECB is reported to be considering helping with easing the debt burden by not taking a profit on Greek bonds it holds. ECB president Mario Draghi will attend the ministers’ meeting.

The Eurogroup will also discuss a proposal from Germany and France to set up an escrow account to guarantee that Greece pays back the debt.

The bailout will likely stave off default for now, something that the EU desperately wants to ensure to prevent contagion in the currency union. If Greece were to go bankrupt, lending costs in other struggling euro zone countries such as Spain and Italy would be pushed to unsustainable levels.

Unlike Greece, those economies are regarded as simply too big to bail out.

There had been palpable frustration this week in Europe as the politicians in Athens stalled on agreeing to the bailout conditions. The troika has insisted on cross-party support, so that any new government after elections in April would not renege on the deal. The program is to go before the Greek parliament on Friday ahead of a vote on Sunday.

The party leaders almost reached an agreement last night, but the issue of pension reform was a sticking point, and talks resumed on Thursday. The politicians are fully aware that voters are furious with them for imposing seemingly unending austerity programs that seem to do little to improve an economy in the grip of recession.

The latest figures show that unemployment had reached 20.9 percent in November and that industrial output fell by 11.3 percent in December.

The country’s labor unions, who held a 24-hour strike on Tuesday, have vowed to take more action on Friday and Saturday. “The painful measures that create misery for the youth, the unemployed and the pensioners do not leave us much room," secretary general of the ADEDY union, Ilias Iliopoulos, told Reuters. "We won't accept them. There will be a social uprising."