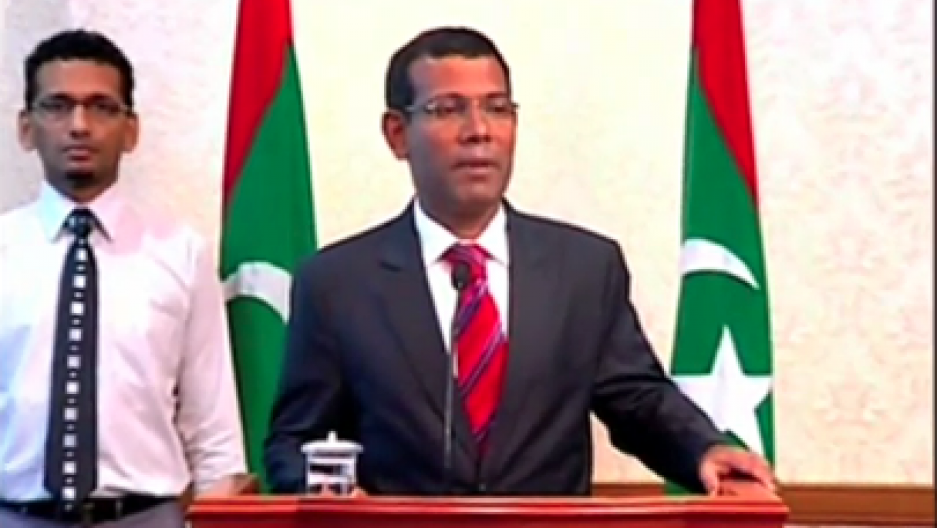 Maldives President Mohamed Nasheed resigned his post, he says at gunpoint, after a wave of protests over the arrest of a leading judge. (Photo from AFP video.)

Riots are raging in the Maldives as supporters of the democratically elected president decry what is being described by some as a coup d'état that forced him from power.

Mohamed Nasheed said he was forced at gunpoint to resign his office. He's publicly demanded his successor resign and insists he wants to regain his seat.

"We will come to power again," Nasheed said in the Christian Science Monior. "We will never step back. I will not accept this coup and will bring justice to the Maldivians."

Protests had been ongoing against Nasheed's government but seemed to reach a turning point this week. A number of police officers fled their posts and joined protesters in the street, clashing with the military. Mohammed Waheed Hassan, the nation's former vice president, took over the leadership role after Nasheed resigned and said he hoped to a create a unity government.

According to the BBC, Nasheed said Hassan was aware of the planned coup — an accusation Hassan firmly rejects.

The protests began over the arrest of a leading judge, Abdulla Mohamed, last month, the BBC said. But if he was forced from power by riots, Nasheed led his own wave of riots on Wednesday. Several thousand of his supporters joined him in a protest march.

The government responded with force, the BBC said.

"Soldiers in riot gear and police with batons charged the crowd and fired tear gas. The main square is now blocked off by soldiers and police," the BBC writes.

Hassan has said he will protect Nasheed and even said he was free to leave the country if he chooses.

The arrest of Mohamed are believed to have hastened the end for Nasheed, the BBC writes. Just hours after Hassan's taking power, the judge was released.

The Maldives is a predominantly Muslim island nation southwest of India. It was ruled by an autocrat until 2008, when Nasheed won the country's first multi-party, democratic elections.