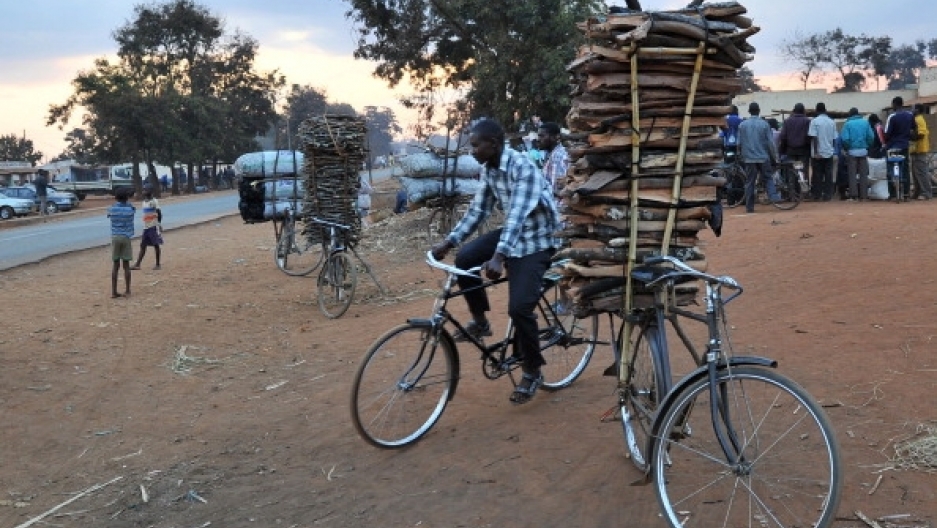 A man rides his bicycle pas another bike with a pile of wood attached outside the village of Lilongwe, Malawi on July 13, 2011. Malawi is one of the world's poorest countries.
Credit: ALEXANDER JOE
Share

Consider the dramatic opening of this story in Malawi Today: “Something raw is happening behind the scenic beauty of Malawi’s Chikangawa Forest — scores of men are queuing for sex with a single woman in a nondescript shack, most times without condoms.”

The poetry of the writing aside, all you have to remember is these key words: something raw, scores of men, single women, nondescript shack and you get the gist of the story.

My favorite part of the whole thing is the nondescript shack detail.

It’s hard enough to visualize men patiently lining up for sex in a descript shack, let alone a completely non-descript one. It makes the whole story that much more mysterious.

Fortunately, the writers of The Nation from Malawi — ever the intrepid reporters — were equally intrigued about the logistical challenges of filling the needs of sex-starved loggers.

So, they got embedded, so to speak.

After a harrowing investigation deep in the forest, here is what Malawi Today reported: “The Nation had a four-day live-to-tell experience in four Chikangawa timber centres: Luwawa, Nthungwa, Raiply and Kalungulu where, at some points, we saw men on queues, waiting for their turn with a prostitute.”

Specifically, this is how it happened, according to the paper:

“The Nation was in luck on a Saturday evening. After sampling traditional wine at Nkhando, our crew witnessed five men lining up near the market’s makeshift bar for a girl who identified herself as Linda from Jenda Trading Centre,” the paper wrote. “In the discomfort of a little shack, a woman (name withheld) takes up to 25 men in one night: one at a time, with or without a condom while the rest wait on a disciplined queue outside.”

The sexual activities are so prevalent in the region that local grocers apparently fail to meet the demand for condoms, which in turn creates a bigger market for unprotected sex.

The Nation reporters have seen “women young and old,” trekking up “the camp of morning wood,” where they can make up to $300 a day. Usually, a price for one session runs from about $3 to $12, depending on the proximity of payday and length of the line outside the nondescript shack.

Linda from Jenda herself sometimes sleeps with up to 25 men a night, which is a lot, but she said she has managed to open a shop at home with the proceeds.

“Most of the men demand more than one session, but if the line is very long, I charge extra — up to K3 000 [about $18],” she told the reporters. “The good thing is that they are usually highly aroused after weeks without sex, so they do not take long [with me].”

It’s hard to identify the true victims in this scenario. The chicken-or-egg question of the victims of prostitution comes to mind.

Who is using whom here, exactly?