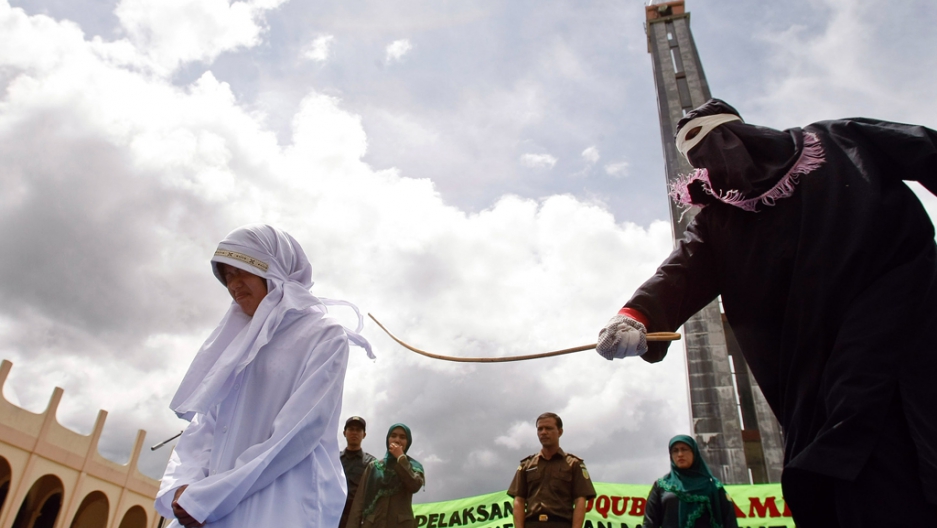 BANDA ACEH, Indonesia — The chief of Aceh’s Islamic police force knows that many outsiders see his vice-and-virtue patrols as menacing and overbearing.

“Take me for example. I’m not harsh at all,” Khalidin said. “I once had a female tourist stay in our home. An Australian. We made friends. I gave her a place to stay, free food. But no kiss kissy!” said the chief, chuckling hard at his own joke.

Aceh’s penalty for premarital “kiss kissy,” however, is deadly serious. As of 2009, adulterers can be legally stoned. The existence of such extreme punishments for out-of-wedlock canoodling and other worldly pleasures are the source of Aceh’s reputation — though whether they are doled out as such is quite another matter.

More from GlobalPost: In Aceh, New Year's revelry is anti-Islam

It does happen. In Aceh, gambling, boozing and premarital hand-holding is punishable by canings, on stage, in front of a mosque. Girls in tight jeans, guilty of revealing their curves, receive lectures on female piety from Shariah police officers in front of their neighbors.

But despite the harsh codes on Aceh's books — stoning, 100 lashes for homosexuality — the laws are seldom applied with full force. A stoning has yet to take place.

Still, Aceh’s Shariah police are poised to gain even more power in seeking out and reprimanding the wicked. Local politicians, having decided tough Shariah plays well at the polls, hope to give Khalidin’s force even more authority.

“We want them to be stronger, not weaker,” said Illiza Sa’aduddin Djamal, vice mayor of the provincial capital Banda Aceh. Strengthening the Shariah police is a core agenda item for her political party, which is seeking re-election in February. “The Shariah police must be reinforced.”

But the Shariah enforcement in Aceh, arguably the most fervently Islamic pocket of Southeast Asia, has ripple effects far outside its borders.

Conservatives across Indonesia, the world’s most populous Muslim-majority nation, eye Aceh with envy. No other province in the otherwise secular nation has been allowed to set up a Shariah police force. Still, more than 50 local governments have followed Aceh in installing Shariah-based laws.

Couples caught alone and unsupervised, according to Human Rights Watch, have been coerced into marriage. Girls under investigation endure virginity exams. Gay rights don’t exist: Khalidin’s Shariah police chief predecessor, Muddasir, told Reuters last year that “in the prophet’s book, people committing (the crime of lesbian coupling) should be beheaded or thrown into the sea, but we don’t have that in our regulations.”

Both Shariah advocates and critics say that, if offered a referendum, the people of Aceh would side with their vision of right and wrong. But no such poll has taken place, leaving Khalidin to speculate that “if Aceh voted, 90 percent would support Shariah.”

No one questions the depth of Aceh’s Islamic pedigree.

As early as the 12th century, Muslim traders came to Aceh’s coast, which juts like a thumb into the Indian Ocean. Historians believe that, with monsoon winds at their sails, seafaring merchants could travel to Aceh from the Persian Gulf in just 70 days. Visits from the Middle East were frequent and Acehnese rulers were among the ﬁrst in Southeast Asia to adopt the Islamic faith.

By the 16th century, Aceh’s sultanates were considered cosmopolitan and mighty. According to French historian Denys Lombard, one of Aceh’s reigning kingdoms could summon armed galleys backed by 40,000 soldiers and 900 war elephants.

But what the Acehnese consider their golden age was later undone by a less-welcome wave of foreigners.

Dutch colonialists’ 18th-century invasion and, later, occupation by Indonesian troops ﬁghting to stop Aceh from seceding, is seen by many Acehnese as a disruption to their natural state: governance under Islamic law. From the 1970s to 2005, guerilla insurgents battled Indonesian soldiers in a bid to transform Aceh back into an independent Islamic state.

“Aceh had Shariah for centuries,” Khalidin said. “We just wanted our lifestyle back.”

In 2001, hoping to satiate Islamists sympathetic to the rebellion, Indonesia permitted the province to restore Shariah law. “It was huge,” said Tabrani Yunis, director of the Center for Community Development and Education, a Banda Aceh-based non-proﬁt. “It was something like euphoria.”

But the euphoria, he said, has faded. Few Acehnese dare criticize Shariah itself, he said, but many feel Shariah police bully the defenseless and allow the rich to freely indulge in sin. Some of Aceh’s higher-end hotels are known to serve alcohol — a crime punishable by 40 lashes — with impunity.

“Shariah is not the problem,” Tabrani said. “The problem is implementation.”

Shariah cops’ lopsided justice is a common refrain among human rights groups. “Women and the poor have become the primary targets of enforcement” in Aceh, according to the International Crisis Group.

Human Rights Watch contends that penalties are “rarely, if ever, applied to wealthy or politically-connected individuals.”

Ira Wati, a 23-year-old female office worker in Banda Aceh, said this imbalance is accepted as fact among Aceh’s women. “High-class women are untouchable. Lower-class women are the victims,” she said. “A high society person being punished? Forget it.”

In Persian Gulf states, and even in nearby Malaysia, canings leave buttocks shredded to a bloody pulp. Aceh’s canings, overseen by Shariah cops in lime-green robes, are less violent and allow the punished to wear pants.

The caners don’t wind their caning arm all the way back to inﬂict maximum damage, said Khalidin, demonstrating the proper half-cocked caning swing in his office. “It’s not about pain,” he said. “It’s about humiliation.” His tone suggests caning is akin to a nun rapping a naughty pupil’s knuckles with a ruler.

Again, though, it is important to note that even the infamous canings don't occur as often as many believe. Local media reports suggest that fewer than 50 were caned in 2011; Amnesty International counted 16 in 2010. When a lesbian couple was discovered living together last year, they were forcibly separated and forbidden to reunite. But they were not flogged or imprisoned.

Foreign, non-Muslim women, Khalidin added, can freely roam without "jilbabs" (headscarves that fully conceal the hair) and play on Aceh’s tawny beaches wearing T-shirts and shorts. “In fact,” he said, “if you ever see my officers bothering tourists in shorts, come complain directly to me.”

Even Acehnese women commonly walk the streets in slim-ﬁt jeans in deﬁance of morality police. Come evenings, teenage girls ﬁll the coffee shops, batting eyes with boys in a way that suggests they are not siblings. In his book “Monsoon,” historian and journalist Robert D. Kaplan recently mused that “Aceh, although the most Arabian of the Indonesian regions, completely lacks the hard atmospheric edge of the Middle East.”

“It’s obvious to all that Shariah here is incomplete,” said Faizal Ali, secretary of the Aceh Ulama Association, a sect of religious scholars that guides Islamic law.

“People still think it’s just about praying or going to the mosque. No, no, Shariah must be everywhere, in everything, throughout government and the foundation of education,” he said.

In other words, they would like Aceh’s Shariah to more closely mimic that of Saudi Arabia. Faizal and other conservatives have proclaimed that, eventually, amputations for theft should be allowed in Aceh.

This demand is echoed by a strain of puritanical youth who fear Aceh is sliding towards foul modernity. “We don’t want to behave like Western countries where there’s lots of free sex,” said Muhammed Muaz Mumauwar, 27, head of Aceh’s National Front of Indonesian Muslim Students.

“We worry about diseases such as HIV,” he said. “What if what’s happening in Africa starts happening over here?” He is equally dismayed by the young, Muslim punk rockers who’ve started begging in Banda Aceh’s streets and sleeping in its parks.

“They stink. Their hair dye contains alcohol, which is haram [forbidden],” the youth group leader said. “You might think they’re cool. We think they’re scary.”

If Aceh’s current ruling party wins February elections as predicted, the Shariah police are likely to receive broader powers. As it stands, the Wilayatul Hisbah can detain suspects for only 24 hours while courts assess their crimes and process their cases further. But a proposal would give the Shariah police more officers and the right to further detain and process suspects so that the Wilayatul Hisbah would more fully resemble a traditional police force.

“I’m not saying it’s necessary for other parts of Indonesia to apply our system. But if they want it, we’re here to provide guidance,” Khalidin said. “We’re not out to scare anyone. We just want pure Shariah.”