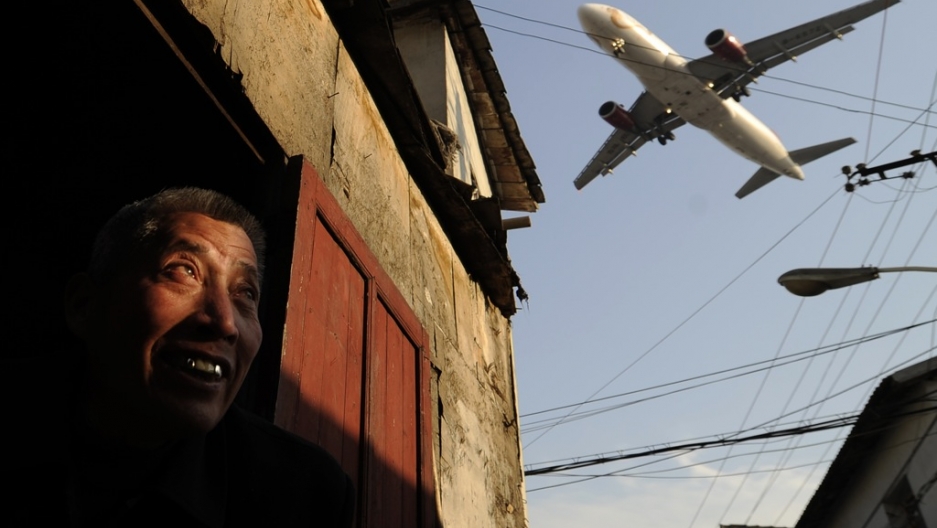 A man watches as an airliner flies over his house into Hongqiao International airport in Shanghai on January 5, 2012. Chinese airlines will not pay a charge on carbon emissions imposed by the European Union from January 1, a national aviation industry group said as the cap-and-trade scheme, which has angered the US and Chinese governments and airlines worldwide, came into force after the EU's highest court rejected a challenge brought by US carriers last month.
Credit: Peter Parks
Share

BRUSSELS, Belgium – As the European Union seeks support from other economies to backstop efforts to save the euro, the last thing it wants is to fly into a nasty little trade war with China, the United States, Brazil and bunch of other angry nations.

However the EU now seems to be on a collision course with China and the others over a new law that aims to fight global warming by taxing airlines for carbon emissions by planes that fly in and out of Europe.

China on Tuesday ordered its airlines not to pay the taxes, and is threatening retaliatory measures if the EU takes action against them.

“It is high time for the EU to rethink its carbon tax scheme and respond in a positive manner,” Chai Haibo, deputy secretary general of the China Air Transport Association, was quoted telling China’s Xinhua news agency. He called the EU plan “neither rightful nor rational.”

Twenty-five other nations including the United States, Australia, Brazil and India have all complained about the new rules, which the EU sees as a central part of its plans to bring down carbon emissions and control climate change.

The issue threatens to poison a Feb. 14 EU-China summit in Beijing where the Europeans were expected to continue lobbying for the Chinese to dip into their $3.18 trillion in foreign reserves to boost International Monetary Fund funds that could be used as emergency back up to the euro zone.

EU officials said they were open to talks with the Chinese on the emissions levy. They have been seeking to de-dramatize the spat by saying that 85 percent of EU aviation emissions allowances will be granted for free. The extra cost per passenger for Chinese airlines operating the Beijing to Paris route would be limited to 1.50 euros, they estimate.

The EU said it would be willing to drop its legislation if there is a global agreement on to limit aviation emissions. China and other nations can also secure an exemption from the levy if they introduce equivalent measures to tackle greenhouse gas emissions at home, said Isaac Valero Ladron, the European Commission’s spokesman on climate change.

More from GlobalPost: China orders airlines not to pay Europe for carbon emissions

Without such steps, however, the EU was not prepared to give in, he insisted.

“We are not backing down and our legislation will apply to those companies operating in Europe,” Valero Ladron told reporters in Brussels. “If they want to do business in Europe, they have to respect the law.”