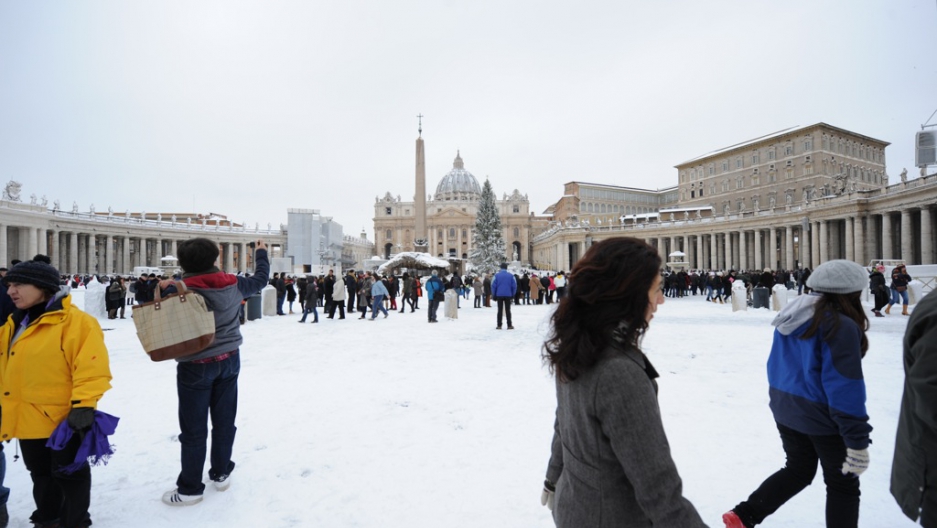 People stand on St Peter's square at the Vatican on February 4, 2012. Heavy snowfalls in Rome caused the normally mild-weather Italian capital to grind to a halt.
Credit: Andreas Solaro
Share

We've been talking about this emerging conflict between the Catholic Church and the Obama Administration for two weeks, and last night and this morning it exploded all over the mainstream media.

The basics are this: The department of Health and Human services issued a regulation that all non-Church religious intitutions, like hospitals and schools, had to provide employee health insurance that includes contraception, sterlization, and drugs that the Church maintains are abortifacients.

You might be thinking: Doesn't the Catholic Church oppose all sorts of things? Why are we even talking about this?

Well, it's true that the Catholic Church opposes legal abortion, it opposed liberalized divorce laws. The current pope and the last one opposed the Iraq War, etc.

But in this case, the government will force the Church's institutions (hospitals, schools, charities) to act in a way Catholics consider sinful: to directly buy insurance for birth control, sterilization, and drugs that act as abortifacients. No, the government isn't forcing employees to use those insured services. But forcing Catholic institutions to pay for those services makes the Church complicit in those acts.

And the response of Catholics to the ruling was immediate and harsh.

Put simply: There is simply no time in American history we can recall where nearly the entire body of American Catholic bishops and priests have united to speak against a sitting president by name, and promised civil disobedience.

In the 19th century, there were fights about the rights of Catholics, mostly related to education. The dynamic Bishop John Hughes who ruled the New York Archdiocese from 1842-1864 spoke out fiercely against the indoctrination of Catholic students in the King James Bible in public schools, and promised to work for the conversion of all Americans. The 1884 Republican presidential candidate, James G. Blaine ran on a platform of banning government funds to "sectarian schools" — meaning Catholic schools — at a time when public schools almost universally indoctrinated students in Protestantism. He lost.

But even then we were dealing with local issues.

This effects hundreds of institutions, and the largest non-profit sector of the health-care economy.

By ruling that the "conscience exemption" only applies to Catholic churches and institutions that primarily educate people in the faith or serve almost exclusively fellow Catholics, the Obama administration has effectively said that Catholics only exist in the pews. The moment they step outside a Church to help the sick, feed the hungry, or otherwise serve and employ non-Catholics, they are no longer allowed to follow their religious dictates.

Rev. Larry Snyder, President of Catholic Charities USA pointed out that the regulations would say that the ministry of Jesus Christ himself was not "religious" because he was doing health-care, activism on behalf of the poor, and interacting with people of other religions all the time.

In effect, the government is deciding what does and what doesn't qualify as Catholicism, and where it is allowed.

And although all Catholic hospitals do take government money through Medicare, Medicaid and other programs, the rule is not at all connected to the reception of government funds; it applies to all employers.

And now the bishops are reported to be discussing organizing an enormous march on Washington to protest the law, and, indirectly, the president himself.

This battle is just beginning.

More from our Partners at Business Insider:

This Dad Got Hit With A $10,000 Bill For Letting His Kids Watch Netflix On The Road

The Truth About Japan's Crazy, Super Sexed Up Electronics District

The 23 Happiest Companies In America

DAVID STOCKMAN: It's True, The BLS Data Is Made Up