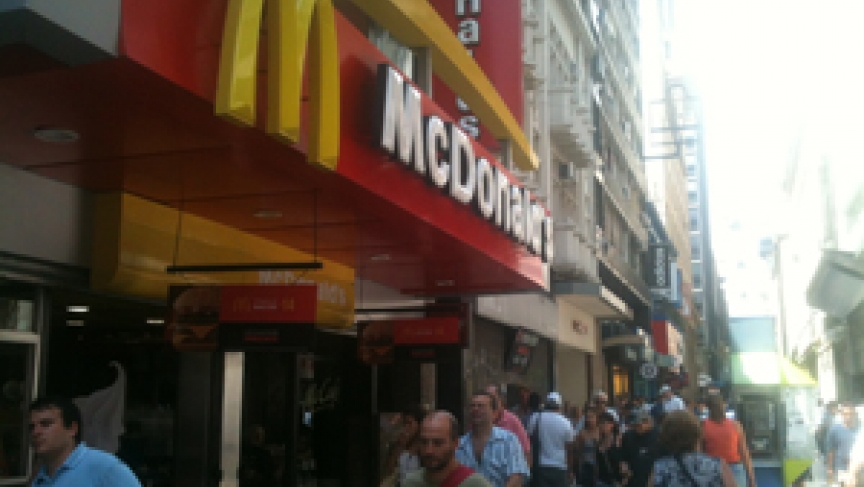 At a McDonald's Restaurant in Buenos Aires, you'll be hard-pressed to find a Big Mac on the menu, but it's one of the restaurant's big bargains. (Photo by David Sommerstein.)

Argentina’s booming economy has been one of the few bright lights in an otherwise gloomy global financial picture the last few years.

But inflation of up to 25 percent threatens that growth. It's one of the world’s highest inflation rates.

The Argentinian government insists the number is much lower, under 10 percent. And it’s enlisted the world’s most famous hamburger to help make its case, in a mysterious way, or so it seems. Step in line at any McDonalds. And you’ll find there’s no Big Mac on the menu.

“It’s really hard to find the Big Mac on the board here. Like, there’s no picture,” said economist Miguel Angel Boyano.

But if you want to order one? No problem.

And compared to what is on the menu, like a quarter pounder or chicken McNuggets, the Big Mac is cheap. With fries and drink, it’s just 22 pesos, or about $5.50. The other meals start at 33 pesos.

So why are the Golden Arches hiding those two all-beef patties, special sauce, lettuce, cheese, pickles and onion on a sesame seed bun? And selling them at 30 percent off? Boyano’s not surprised at all. In fact, he called it, “an obvious thing."

“I’m 100 percent sure they told the guys at McDonald's, listen, you won’t sell this meal over this level. So they actually fix it about 30 percent below the other ones,” Boyano said.

The Economist magazine publishes one of several inflation indicators. Its famous Big Mac index uses the prices of Big Macs worldwide to measure inflation rates. The magazine called out Argentina last year for manipulating the price.

Kiguel said the government’s sticking to the lower rate, under 10 percent instead of 25 percent, hoping to curb expectations.

But that’s not happening. Right now unions are insisting on 25 percent wage increases, and in the past, they’ve gotten them. Kiguel’s firm, Econviews, consults with foreign companies. He said investors otherwise bullish on Argentina may get spooked by the government’s increasing hand in the domestic economy.

“Lots of controls on imports, controls on exports, also controls on sending dividends abroad,” he said. “But, you know, firms that operate in a country like this, pay attention to this.”

President Fernandez has actively defended the government intervention, saying it’s the only way for her small country to develop mature industries that can compete with the United States and western Europe.

Fernandez de Kirchner is popular with Argentines, having won a landslide election last October. But that doesn’t mean they buy her government’s inflation figures.

Sabrina Perez and Giselle Rodriguez, systems analysts for a local company, both said inflation is much too high, and salaries aren’t keeping up with prices, like they used to.

“In relation to what you make, if you want to buy yourself something special, you have to work too hard to do it,” Rodriguez said.

Victor Miguel Greco, a security guard at a downtown mall, agreed. But in a country where inflation was as high as 200 percent a couple decades ago, he said Argentines are more used to prices creeping up than, say, Greeks or other Europeans dealing with their current crisis.

“It doesn’t hurt us as much. It’s not good, but you can live with it,” Greco said.

The Argentine government has stayed mum on the Big Mac controversy. When local media asked McDonald's why its most famous product was removed from displays, the company said it’s just marketing new products, like a “Triple Mac”.

But if it’s a fast food deal you’re looking for, the Big Mac may be Argentina’s worst kept secret.