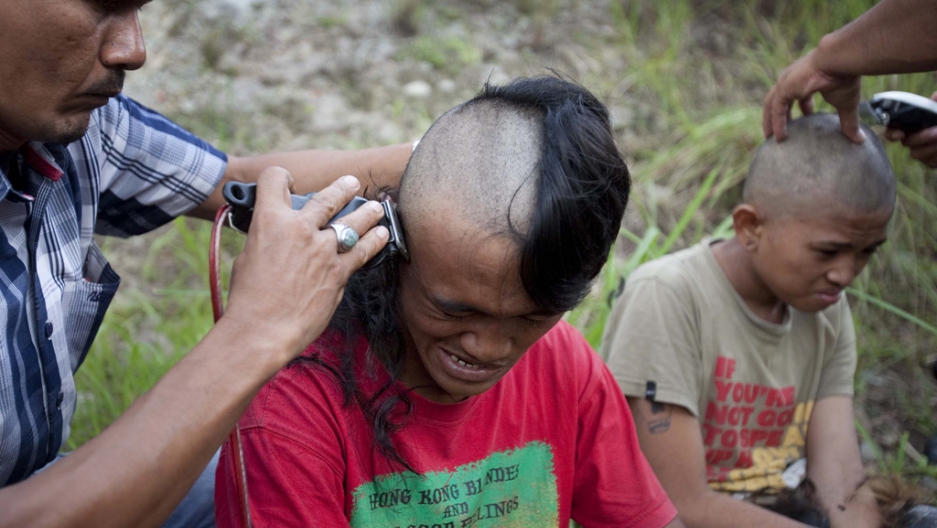 BANDA ACEH, Indonesia — They emerge at night, raven-haired and zitty, ambling through the city in flip-flops and black T-shirts. Their physiques reflect a diet of instant noodles. Their limbs are inked up with scribbly tattoos.

They are young, Muslim and punk. And ever since the raids began, they have been highly paranoid.

In Indonesia’s Aceh, a tropical province governed by Quranic (or Shariah) law, punk rock has become an unofficial crime. Aceh’s ulama, a council of Muslim scholars, would like to make it official: They’ve suggested a qanun, or holy law, that would forbid the “punk-rock lifestyle.”

In the meantime, police have rounded up, shaved and attempted to reform punk rockers in jungle boot camps.

“They are out of sync with Islam,” said Illiza Sa’aduddin Djamal, deputy mayor of Banda Aceh, the provincial capital. As a local election nears, she has become the face of authorities’ war on punk rock, and she boasts overseeing police raids in her stump speeches.

“The big holes in their ears, it looks weird,” Illiza said. “We don’t want it to spread to the next generation.”

Just how did a gaggle of gawky guys become the No. 1 public enemies in Aceh, the most devout corner of the world’s largest Muslim-majority nation?

Scooby, a 21-year-old punk recently returned from boot camp, has his theories. For now, he and his pierced brethren are opting for discretion over defiance. They would only meet with GlobalPost around midnight behind closed doors over black coffee and Marlboros.

For starters, the punks would like to clarify something: they share the faith of their pursuers. “We’re all Muslim. We go to the mosque too,” said Scooby, whose real name is Ade Meisancly. “When we pray, we take off our piercings and put on prayer garb. When we go back out, we put all of our piercings back in.”

They also claim the most recent anti-punk sting — a December operation that landed 60-plus concertgoers in a Scared Straight-style Islamic rehab camp — was abusive.

GlobalPost video: Why Indonesian kids are crazy for punk

“As we were arrested, I got beat up,” said Jarot Susanto, 23, his forearms marked with smudgy tattooed skulls. “We couldn’t fight back. We just let ourselves go. I just wanted it to stop.”

He appeared equally aggrieved over the loss of his triple mohawk, which took months to cultivate. Every male detainee was buzzed bald and every female punk’s hair was clipped into a neat, military-friendly bob. “It’s a permanent heartbreak,” Jarot said.

Photos of the punks corralled and shaved swept across the internet and turned them into the global punk community’s heroes du jour. But in the eyes of Aceh’s authority figures, the 10-day, police-run rehab was meant to shape broken boys into pious men.

Aceh’s elders describe punk rock as a social disease that must be purged. The urge to cleanse the punks is literal. At boot camp, they were forcibly bathed in what authorities called a “holy lake.” The secretary of the Aceh Ulama Association, Faisal Ali, says their lax hygiene defies Quaranic commands to wash and respect one’s body.

“This is our community. And in this community, you’re not allowed to act like that,” Faisal said. He was among the first Muslim scholars in Aceh to suggest outlawing the “punk lifestyle” on religious grounds.

“Tattoos? Piercings? Dyed hair? That’s weird for Aceh. We’re not ready for it,” he said.

But the punks’ forced rehabilitation, he said, is for their own good. “It’s not human-rights abuse. It’s guidance.”

The punks’ dysfunction, Illiza said, is partially explained by broken homes and orphanhood wrought by the 2004 Indian Ocean tsunami. The disaster killed more than 160,000 in Aceh alone. She described one punk rocker whose grandfather was an ulama from the same distinguished class of Muslim scholars now suggesting laws against punk. The boy, whom she did not name, lost both parents to the waves and later went astray.

“He lost his parents’ love,” Illiza said. “Maybe that’s why he became a punk.”

She believes the punks are, despite their claims to the contrary, craving a parental figure’s guiding hand. “When we took the punks to rehabilitation, they were happy,” she said. “They had fun. They didn’t want to leave their trainers’ sides. It was captivating.”

What the punks described, however, was captivity. They are fearful of another stint in rehab. Their ongoing cat-and-mouse game with cops has only hardened their allegiance to punk and its principled hatred of authority.

Unlike many developing-world teens attracted to punk rock — kids whose mushy concept of the genre lumps in arena-metal acts such as Slipknot — the Aceh punks’ ethos is refined.

At their local “warnet,” or internet çafe, they have studied punk rock’s dizzying sub-genres (crust punk, hardcore, pop punk) and settled on “anarcho-punk.” This particular strain advocates a society without rules. Nothing could be farther from life in Aceh, where a strict Islamic code dictates a person’s dress, sex life, eating habits and more.

“No fighting, no wars, no leaders across the globe!” said Wahyu “Caplex” Muchlisa, a 20-year-old punk with liquid, red-rimmed eyes. Slipping into English from his native Indonesian, he added: “No f***ing a**hole governments.”

One of their bands, Chaotic Pavement, sings “anarchy songs” about a fantasy world, rid of presidents and prime ministers, that operates on a barter system.

But in Indonesia, a so-called punk “band” does not require amplifiers, a drum kit or any plug-in instruments. The Aceh punks are “pengamen,” a uniquely Indonesian street-begging phenomenon born in the gritty capital of Jakarta. Young men approach idling cars or passersby in packs, bang out tunes on acoustic guitars and hope for a few loose bills.

Chaotic Pavement relies on a single, beat-up ukelele and five guys singing in ragged harmony. Their music is sonically akin to Woodie Guthrie but lyrically closer to American or UK groups with names such as “Nausea” or “Doom.”

The Aceh punks make roughly $10 a night and divvy it up between five or six guys. Those with nearby families return home once a week to wash up. They spend most nights in an army-owned park.

Their run-ins with Islamic police and their raw street life, which few Western punks would dare mimic, has attracted admirers around the world. Punks protesting their detainment have demonstrated from Jakarta to San Francisco to Moscow. Even Propagandhi, a revered political thrash band, told fans via their website that Aceh’s punks are “definitely people to look up to and honor.”

“This is the first time in recent memory that the punk subculture was specifically targeted by a government without any serious provocation,” said Rob Hanna, 32, owner of Seattle’s Aborted Society record label. “Our reaction to this was very visceral.”

Sympathizers make CDs and cassettes of their favorite bands, mail them to the label and Hanna ships them to Indonesia. More than 100 mixtapes have poured in from around the world. Hanna is still deciding how best to discretely put music into Aceh punks’ hands.

“Punks are a group of people that are easily marginalized and ridiculed. It’s easy to write them off as a bunch of drunk kids,” Hanna said. “In some cases, that’s true. But there’s also a very complex network that throws benefit shows, builds community centers and holds social-justice workshops. It’s bigger than ever. Punk is not dead. It’s actually bigger than it ever was.”

But in Aceh, the punks’ newfound Western cachet is mostly useless. They concede to feeling powerless in escaping society’s unyielding cultural vision. As for Scooby’s theories regarding anti-punk crackdowns, he hinted at the upcoming provincial elections and politicians’ need to burnish their pious credentials.

Illiza, the vice mayor, whose smile beams down from campaign posters around Banda Aceh, confirmed that the punks’ refusal to conform will be met with more stiff guidance. “Sorry, international media, but we can’t tolerate this in Aceh,” she said. “If we see them on the street, we’ll re-educate them again.”

She even imagines the punks’ ongoing rehabilitation as a “pilot project” that could someday mould other Acehnese youth.

“We should be educating all young people, including those preparing to marry and have children,” Illiza said. “If we’re successful, we could even prevent a punk from being born.”