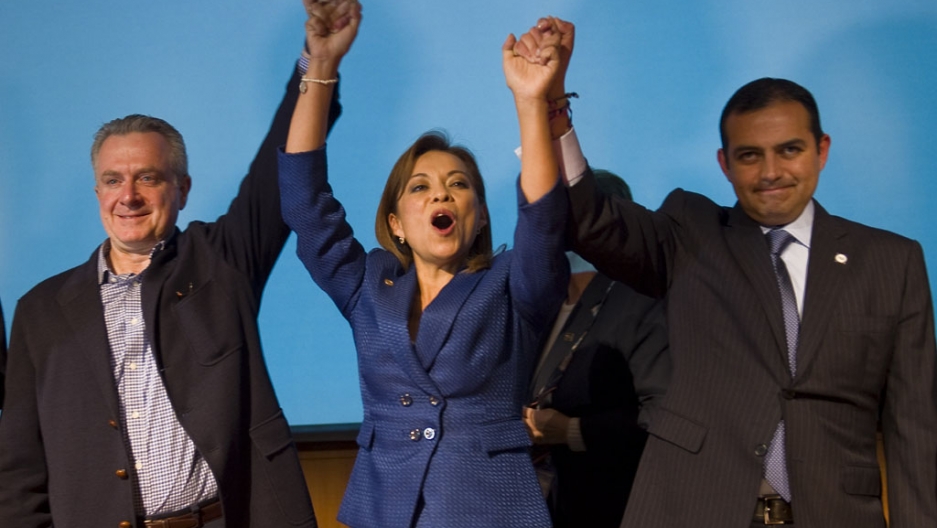 Vázquez Mota, 51, was outgoing President Felipe Calderón's education minister before she led the PAN in the lower house of Congress. She is a popular and powerful lawmaker in Mexico and has played on Peña Nieto's numerous gaffes over recent weeks, hoping to hamper his considerable momentum.

"I am going to be the first woman president in history," Vasquez Mota said during a celebration speech.

PRI candidate Peña Nieto, when asked by a reporter if knew the price of a kilo of tortillas, a Mexican staple, replied bluntly, "I am not a housewife." The response was lambasted by many as an example of the country's machismo, or chauvinist, attitude towards women.  He also struggled to correctly name three books that had influenced him at the Guadalajara International Book Fair.

“Well, I've read several, including novels, which I liked a lot,” the politician said. “I'd struggle to remember the names.”  Peña Nieto mentioned the Bible, a novel whose author he couldn’t remember, and a Mexican history book with a title that also escaped him.

To top it off, the 45-year-old was promoting his own book, Mexico: The Great Hope. “[He may be the only man] to have written more books than he has read,” joked lawmaker Mauricio Toledano.

Vázquez Mota, meanwhile, must overcome the considerable burden left to her by the incumbent Calderón. His war on the country's drug cartels has led to some 47,000 deaths since he came to power in December 2006, risingly sharply year-on-year. She maintains some distance from the president, and wasn't his preferred candidate. This leaves her room to manoeuvre away from his less popular policies.

Still, re-election for Calderon's party is unlikely, leaving the gaffe-prone Peña Nieto pretty clear sailing to the presidency and a return of PRI's seventy years in power before 2000.

“Unless the Virgin of Guadalupe intervenes, [Peña Nieto] will win the election in a landslide,” George Grayson, a professor at the College of William & Mary in Virginia, told Reuters.

The pair is up against Andrés Manuel López Obrador of the Democratic Revolutionary Party (PRD) who lost by a narrow margin to Calderon in 2006.