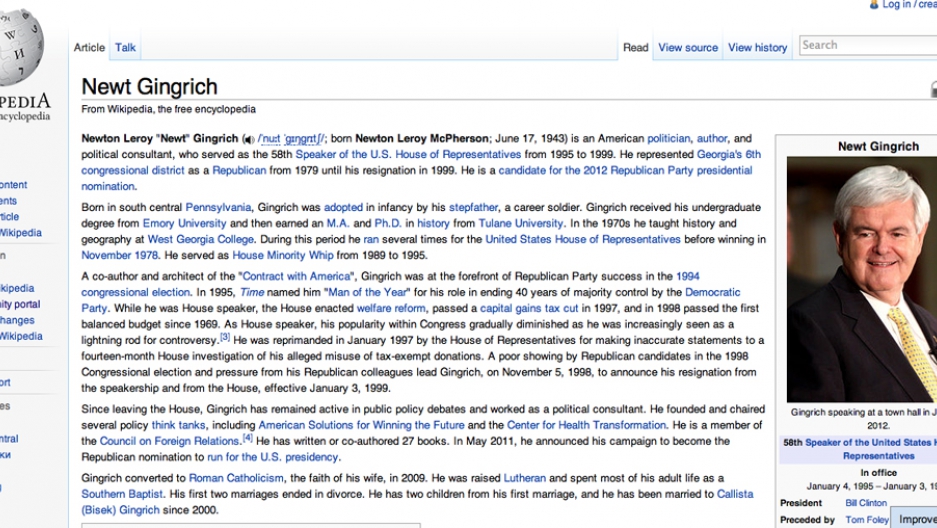 Over 60 changes have been made to Gingrich's Wikipedia page by his communications director.
Share

According to Wikipedia records, DeSantis has made or requested over 60 alterations to Wikipedia's biographical entry on Gingrich.

The communications director has also made changes to Gingrich's wife Callista's page on the online crowd-sourced encyclopedia, adjusting her entry at least 23 times since 2008, according to BuzzFeed.

DeSantis has requested changes to the GOP presidential candidate's page through a feature on the site called "Talk" since May 2011, most recently asking for adjustments in mid-December.

DeSantis has drawn criticism from some Wikipedia editors.

"I'll raise the question in the appropriate place, but I have to say this micro-managing by a Gingrich campaign director is a matter of concern to me even though you now are identifying yourself. Pointing out factual errors is one thing, but your input should not go beyond that, even here on Talk," an editor known as Tvoz wrote on a page devoted discussing edits, according to CNN.

Wikipedia warns against conflicts of interest on the site, which it defines as "an incompatibility between the aim of Wikipedia, which is to produce a neutral, reliably sourced encyclopedia, and the aims of an individual editor."

Conflict of interest editing includes contributing to Wikipedia in order to promote "your own interests or those of other individuals, companies, or groups," according to the guidelines.

"I stopped making direct edits in May 2011 because I was alerted to the COI rules," DeSantis said in the statement, CNN reported. "Earlier I thought that simply disclosing my affiliation was enough but it wasn't. So I started posting requests on the Talk page. This has been far more successful and the other editors on Wikipedia have largely received this very positively."

Some of the changes DeSantis requested were small, such as a change to Callista's photo. However, he has also attempted to erase touchy details from both Gingrich's profile as well as his wife's.

According to BuzzFeed, DeSantis removed from the introduction of Callista Gingrich's biography the phrase: "She met her husband while he was in the House, and had an affair while he was conducting the impeachment investigation for President Bill Clinton."

DeSantis also sought to edit or erase details about Gingrich's $500,000 credit line at luxury jeweler Tiffany's, information on a House ethics investigation of Gingrich, and descriptions of the candidate's positions on water boarding and climate change, according to CNN.