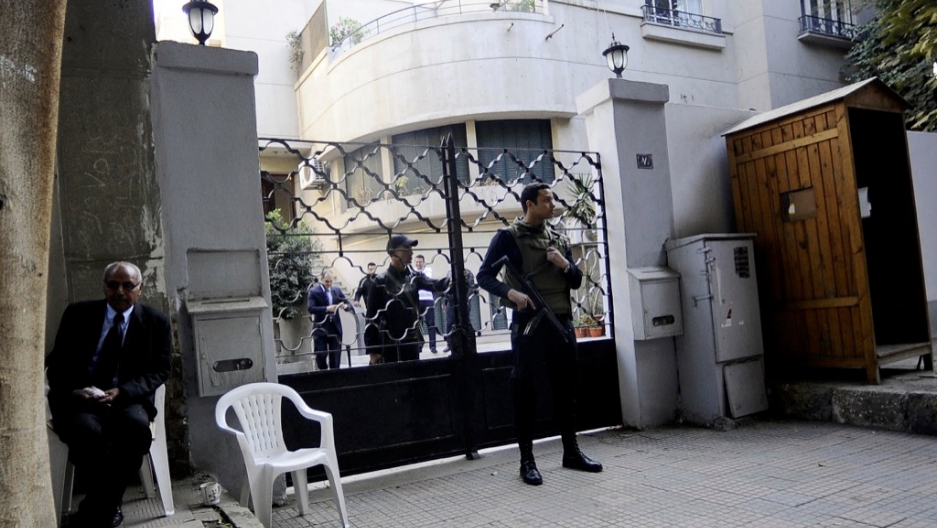 Egyptian soldiers stand guard in front of the US National Democratic Institute, an NGO (non-governmental) rights group in downtown Cairo on December 29, 2011. Egyptian police were searching the Cairo offices of American and Egyptian rights group following orders by the prosecution service which is investigating how the rights groups are financed.
Credit: Filippo Monteforte
Share

Forty-three NGO workers, including 19 Americans, are being referred to a Cairo criminal court to stand trial for illegally receiving foreign funds, the ministry of justice announced today.

The move will likely deteriorate further an ongoing row between US and Egyptian officials over foreign aid to organizations involved in political activities here.

A trial date for the accused has not yet been set.

One of those charged, an Egyptian woman who wished to remain anonymous for fear of legal repercussions, spoke to GlobalPost minutes after the names of the accused were announced.

She works for the National Democratic Institute (NDI), an American NGO affiliated with the Democratic Party and that provides training and support to voters and democracy advocates both in Egypt and in countries around the world.

"I feel very bad," she said through tears on the phone. "I am waiting to hear the official charges. We didn't even know there was a list [of accused] until yesterday."

Foreign funding of political NGOs has long been a contentious issue in Egypt, ruled for decades by now ousted authoritarian president, Hosni Mubarak.

But growing fear of "foreign interference" in domestic affairs following a popular revolt last year has bolstered support among many Egyptians for crackdowns on organizations and activists they see as destabilizing the country.

More from GlobalPost: Is Egypt's military worse than Mubarak?

"After the revolution, I wanted to be part of something positive," said the NDI employee, who became more involved in training political party members as part of her work over the past year. "And it turned into a trial."

The law says all NGOs must register with the ministry of social solidarity to approve transfers of funds from abroad. But registering with the government means opening an organization's books to intelligence surveillance, civil society groups here say.

More from GlobalPost: Muslim Brotherhood backs crackdown on US nonprofits in Egypt

But the controversy has escalated into a debate over Egypt's sovereignty. US officials have fired back with threats to withhold $1.5 billion in annual aid to Egypt's military rulers.