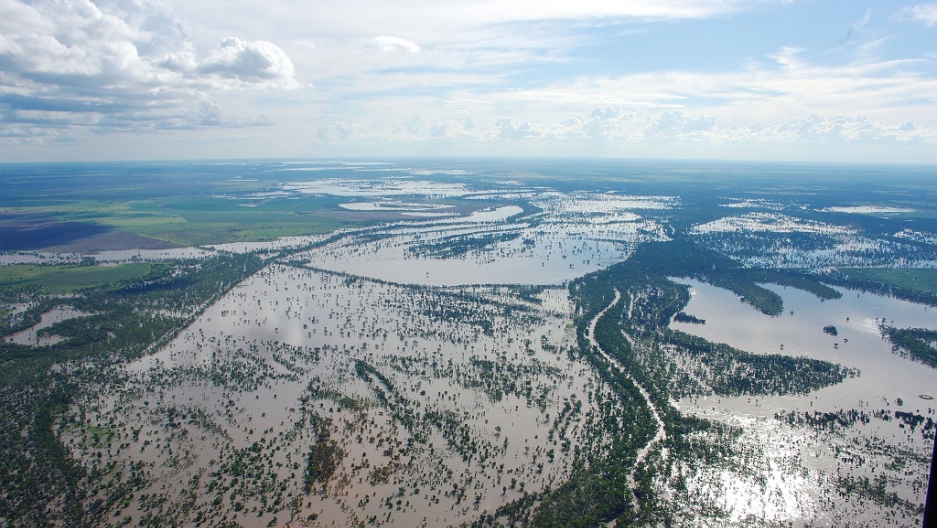 An aeriel view of the swollen Balonne River in Queensland is seen just before water levels peaked at 12.75 metres (42 feet) on Jan. 4, 2011. The river is now threatening to reach new highs, devastating the township of St George.
Credit: Maranoa Regional Council
Share

MELBOURNE (Australia) – Thousands of people have been evacuated from the parts of the eastern Australian state of Queensland, where river heights are threatening to reach record levels, local media report.


Over 2,000 people were forcibly evacuated from the inland township of St George on Saturday night, in what the Australian Broadcasting Corporation says was the largest evacuation in the state’s history.


The Australian newspaper says the nearby Balonne River has already passed the all-time high of 13.4 metres (44 feet) recorded during the devastating floods of 2010, and it is expected to continue rising to over 14 metres (46 feet).


The newspaper says that some 300 to 400 residents had stayed to protect their properties, ignoring warnings that rescue services might not be able to reach them later. Some had built a temporary levee in an attempt to hold back some of the water, but the state Premier Anna Bligh said their efforts had “no prospect” of succeeding. Twenty houses were destroyed over the weekend and a final evacuation was scheduled for Monday morning, local time.


“This is the third flood this town has coped with in just less than two years, so there's a lot of distress and a lot of emotion,” Bligh added, confirming that she would visit the flood-affected areas on Monday.


Later on Monday morning, some media began reporting that the area may escape a major disaster. The Senate leader for the opposition Nationals party and local resident, Barnaby Joyce, told AAP that the river’s expected peak had been revised downwards to below 14.5 metres.


"We hope it's going to be lower. We'll just wait and see - wait and see and sandbag, there's not a lot more to be done at the moment." He witnessed the flood firsthand, describing the floodwaters as “something that would fill Sydney Harbour every two days”.


The Australian government’s Bureau of Meteorology says it could be Thursday before floodwaters start to recede and people can return to their homes in the area.