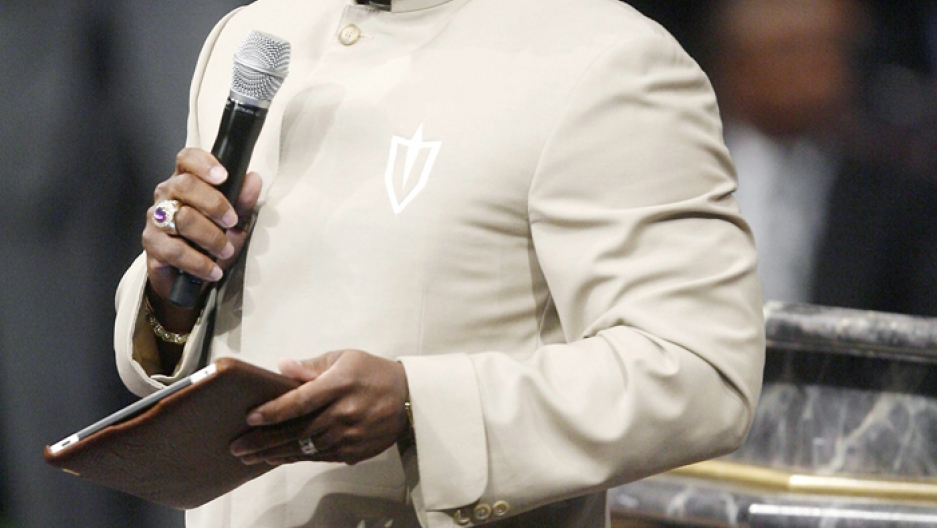 Bishop Eddie Long gives a sermon in Atlanta, Georgia. Long ignited controversy among religious scholars and Jewish leaders after a video of him being crowned 'king' and wrapped in a Torah surfaced this week.
Credit: Pool
Share

Eddie Long, the controversial pastor of a Georgia-based megachurch, was anointed 'king' in a ceremony that has outraged some Jewish community leaders, the Associated Press reported.

The video, filmed at a service at New Birth Missionary Baptist Church, shows Messianic preacher Rabbi Ralph Messer instructing two men to wrap Long in a Torah. Then, Long is seated in a chair, covered in a prayer shawl while holding the sacred scroll and lifted by four men.

"He now is raised up from a commoner to a kingship," Messer says in the video, as the men walk Long's seat through the crowd.

Several Jewish leaders and religious scholars have spoken out against the ceremony, saying that Ralph Messer is not a representative Messianic Judaism or the religion as a whole.

Messer describes himself as “president and founder” of his congregation, Simchat Torah Beit Midrash, based in Colorado. “With an Apostolic and Evangelistic anointing, Rabbi Messer actively teaches the Hebrew Roots of the Christian Faith,” his biography reads, the Los Angeles Times reported.

The congregation describes itself as “a community of Jewish and non-Jewish believers in Yeshua HaMashiach (Jesus Christ).” Messer doesn’t claim any connection to the more traditional branches of Judaism.

The Torah is one of Judaism's most sacred objects and Jewish groups said the notion that it was used in a ceremony at the church was offensive, the AP reported.

"His address of Eddie Long as a biblical or Israelite king is without foundation in the scriptures or in reality," Wil Gafney, an associate professor of Hebrew and Old Testament at the Lutheran Theological Seminary in Pennsylvania, wrote in the Huffington Post. "The notion that there is such a thing as a 'king chromosome' is a fiction."

“The connection of the Torah scroll to the Holocaust and then to Eddie Long is incomprehensible to me,” David P. Gushee, a professor of Christian ethics at Mercer University, told the Atlanta Journal-Constitution. “What was the point?”

"My message was about restoring a man and to encourage his walk in the Lord," Messer said in the e-mail. "It was not to make Bishop Eddie Long a king."

Long and New Baptist are no strangers to controversy: In 2010, Long was accused of coercing four young men into sexual relationships; the lawsuit was settled out of court. The same year, a former New Birth employee filed a lawsuit against the church alleging that she was sexually harassed by a former supervisor, who showed her a picture of his penis on his cell phone, according to CBS.

Long took a leave of absence last year in wake of the scandals. He returned to the pulpit in January.