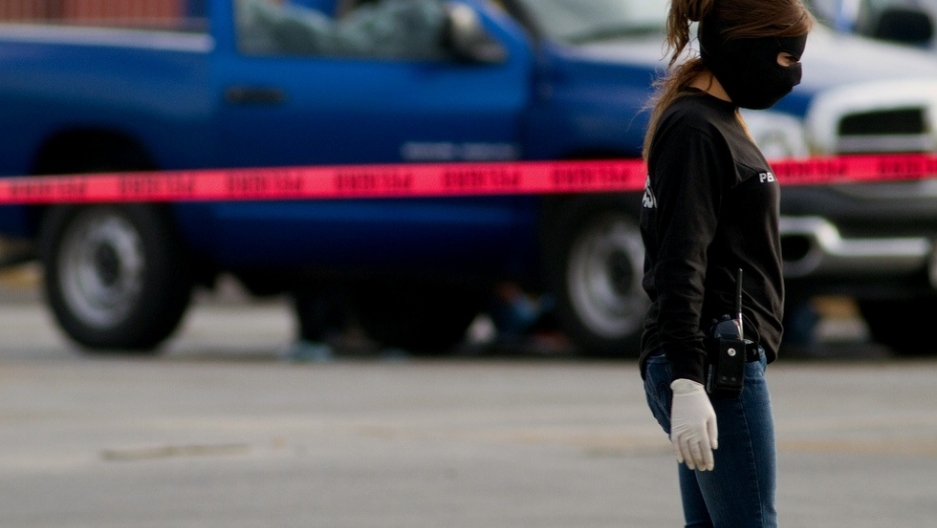 Even by Ciudad Juarez’s grim standards, a threat from a Mexican drug cartel to kill an officer a day until the city’s police chief steps down is being seen as an unusually terrifying escalation in the violence.

Since Monday, an estimated 2,000 police officers have been spending their off-duty hours in hiding in a series of hotels and safe houses in and around the troubled border city in an attempt to keep from becoming the latest victims in Mexico’s brutal drugs war.

Mayor Hector Murguia announced the move in response to a demand from the New Generation Juarez cartel that police chief Julian Leyzoala stand down – and that it would it murder a member of his force every day until he did so.

The officers will be staying in the hotels and safe houses for around three months, Mayor Murguia said, at a total cost of $1.5 million.

The threat from the drug gangs could not be more real. A total of 11 police officers have already died this year in Ciudad Juarez.

It is easy to understand the cartel’s desire to rid itself of Leyzoala, 51, whose “iron fist” approach has been viewed as effective if controversial.

Ciudad Juarez remains one of the most dangerous cities in the world. But since Leyzoala took up his job in March last year, the bloodshed has declined.

According to the Chihuahua state attorney’s office, there were 1,933 violent deaths last year compared to 3,117 in 2010.

Yet as often happens when drug cartels are involved, the conflict isn’t so clear-cut.

According to the Mexico City office of security firm Control Risks, what has really irked the New Generation Juarez cartel is its belief that Leyzoala may be “tacitly” favoring its rival, the Sinaloa cartel.

The two criminal organizations are engaged in a ferocious turf war for control of Ciudad Juarez — and the billions of dollars worth of cocaine and other drugs that flow through it and on to El Paso, Texas, just on the other side of the border.

“In the short term, it is likely that the targeted attacks against local police will continue as the New Generation Juarez cartel attempts to demonstrate that it has the capacity to carry out its threats,” added Control Risks, in an email to GlobalPost.

The British company does a thriving trade in Mexico, advising businesses and wealthy individuals on how to avoid becoming one more name in the country’s exploding violent crime statistics.

Yet the New Generation Juarez cartel has an unlikely bedfellow in its desire to see the back of Leyzoala – human-rights campaigners.

They accuse the police chief of a string of abuses, including torture, in his attempts to crack down on the drug-traffickers.

“It compounds the problem rather than resolving it. It may result in short-term reductions in the violence but ultimately it reinforces the cycle of brutality.”

Leyzoala, a former military officer, is hardly new to controversy.

He was previously chief of police in Tijuana, Mexico’s other major crime-riddled city on the US border, where he survived several assassination attempts. There, he oversaw a similar drop in violent crime, and was accused by the human-rights office of Baja California state of personally participating in torture. It called – in vain – for his suspension.

Prior to that, while still in the army, Leyzoala carried out a major corruption probe of the Mexican police in which, Amnesty International has reported, 25 police officers were tortured.

Despite those grave allegations, Leyzoala has remained unrepentant about his approach, which has seen him lauded by the government of President Felipe Calderon, and policymakers in the US.

“At least in Tijuana the people are happy, because we gave them back their peace of mind," Leyzoala has said. “There have been criticisms for a long time, but criticisms from people who have ended up in jail.

“I know that the criminals have a tremendous economic capacity. They hire squads of lawyers to defend a laborer. You say ‘How is it possible that a laborer has five lawyers and they refer me to human rights [watchdogs] and they sue me?’ They say I did this and that. Prove it, buddy, prove it.”

Mayor Murguia also defended his police commissioner this week, saying the New Generation Juarez cartel’s claims that he is favoring the Sinaloa cartel are really motivated by the increasing pressure he has correctly applied to them.

And, other than the New Generation Juarez cartel, few now expect Leyzoala to resign or be fired.