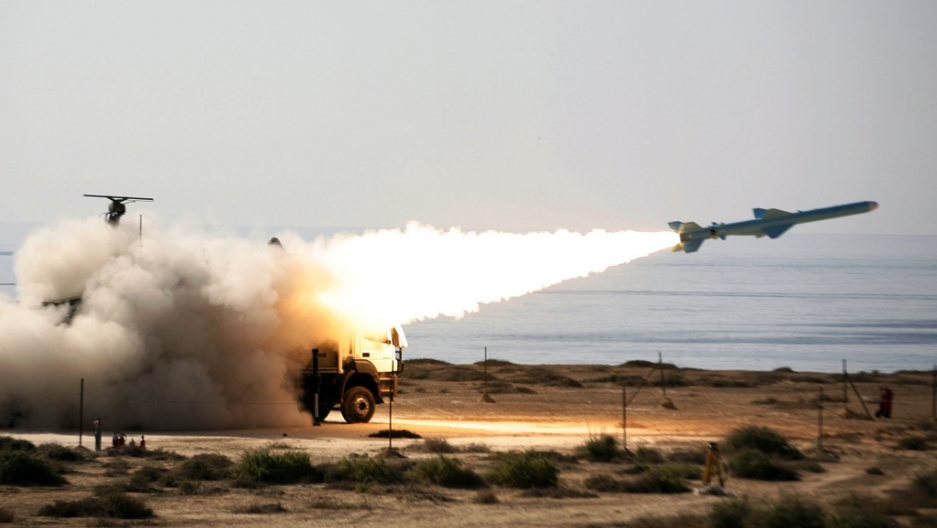 An Iranian Qader (Ghader) ground-to-sea missile is launched on the last day of navy war games near the Strait of Hormuz in early January. On Jan. 23, 2012, the European Union enacted tough sanctions against Iran; earlier, Tehran had threatened to close down the waterway in retaliation against an oil embargo.
Credit: Ebrahim Noroozi
Share

JERUSALEM — The rhetoric between Iran, the United States and Israel has reached such a fever pitch that even the most staunch skeptics here are beginning to wonder if Israel might actually go ahead and launch a unilateral attack on Iran.

Meir Javedanfar, a top Israeli expert on Iran and a professor at the Inter Disciplinary Center in Herzliya, told GlobalPost that his view of almost total doubt about the possibility of such a strike has shifted in light of recent official statements.

“I am taking the escalation of words very seriously. I no longer think this is just a media game,” he said.

Addressing a crowd of worshippers at Tehran University on Friday, Iran’s Supreme Leader Ali Khamenei said that Israel is a “cancerous tumor and will soon be removed from the world.”

More from GlobalPost: Has the war on Iran already begun?

Dismissing US President Barack Obama’s statements that no option is off the table when it comes to preventing Iran from achieving nuclear weaponry, Khamenei said, “A war would be 10 times deadlier for the Americans than for us. These threats indicate America's weakness and the Americans need to know that the more threats they make, the more they damage themselves.”

The statement appeared to be in response to several others made at a security conference held this week in Israel.

Speaking at the conference, Israel’s chief of military intelligence, Gen. Aviv Kochavi said Thursday that Iran could be closer to an operational nuclear weapon than previously thought.

“Today, international intelligence agencies are in agreement with Israel that Iran has close to 100 kilograms of uranium enriched to 20 percent, which is enough to produce four bombs," Kochavi said at the Herzliya conference.

“Iran is actively pursuing its efforts to develop its nuclear capacities, and we have evidence that they are seeking nuclear weapons. We estimate they would need a year from when the order is given to produce a weapon.”

“Whoever says ‘later’ may find that later is too late,” he said.

Following the same line, US Secretary of Defence Leon Panetta confirmed in an interview this week with CBS that Iran could be only a year away from producing a nuclear weapon.

On Friday, the Washington Post published an article claiming that Panetta is concerned about being “blindsided” by a possible Israeli attack. Typically, the logic has gone that Israel would never attack without approval from the United States, which Obama is unlikely to give.

“Israel has indicated they’re considering this, and we have indicated our concerns,” the Washington Post quoted Panetta telling reporters at a NATO meeting in Brussels.

Israeli analysts previously sceptical of a scenario in which Israel might act unilaterally against a possible Iranian nuclear device have started to shift their views. Writing his weekly column in the daily Ha’aretz, the highly regarded defence analyst Amir Oren openly addressed the possibility of Israel launching an attack against Iran without previous coordination with the United States.

“The Netanyahu-Obama relationship is so cold that one tends to discount a permanent factor in the prime minister's considerations in Jerusalem — the fear of the White House's response. An action that goes against the will of a president who is campaigning for a second term in office, especially on the eve of elections, is liable to exact revenge on the person who decides to take that action. But Netanyahu has nothing to lose: Obama in his second term will exact payment from him in any case. He will insist on a diplomatic agreement contrary to the line Netanyahu has been taking in the Palestinian arena, and possibly in the Syrian arena as well.”

Using the nickname of Israeli Prime Minister Benjamin Netanyahu, Javedanfar added, “I don’t think the possibilities of a unilateral Israeli attack are high, but it no longer seems impossible. It would be extremely risky for Israel to do it, but that doesn’t mean Bibi wouldn’t do it. If he’s willing to ignore Obama for so long on the peace process and if he views the Iranian government as a Nazi regime, we just don’t know.”

Javedanfar said Khamenei’s reaction was “a clear sign that he gives credibility to the possibility of an attack against Iranian nuclear installations. The fact that Panetta is also worried proves that Khamenaei’s concerns may be justified.”

Until now, Javedanfar added, he’s been “very skeptical of a possible Israeli attack. But based on statements in the press I’m becoming more concerned that the possibility that Israel may launch a unilateral attack can no longer be ignored.”

“If Israel does launch a unilateral attack it would be because it has considered the current sanctions ineffective, and even more importantly it would be because they have completely lost faith in the possibility that the Iranian regime may show flexibility.”

“What the Iranian leadership doesn’t seem to realize is that right now they have an opportunity through negotiations to improve relations with the West and eradicate the possibility of a conflict. They could use the International Atomic Energy Agency. The IAEA is in Vienna. It is neither in Tel Aviv nor in Washington,” he said.