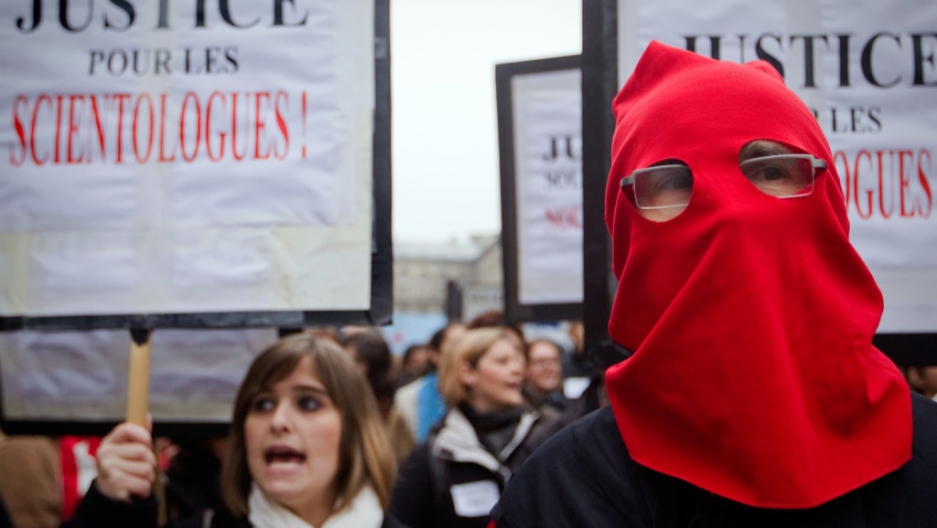 The development puts its famous recruitment methods under a spotlight.

Scientologists vehemently reject the conviction, saying that they are the victims of anti-cult organizations trying to destroy them. “Respect my religion,” chanted several dozen Scientologists, braving sub-zero temperatures in the front of a courthouse in Paris.

“We did not have a fair trial,” said Marie a 55-year-old computer scientist, who refused to give her surname, “France doesn’t tolerant religions, it is attacking our movement.”

On Thursday, an appeals court in Paris upheld a conviction against the Scientology organization for organized fraud, assessing a $530,000 fine to the Scientology Celebrity Centre in Paris and a $265,000 fine to its bookstore. Several leading French Scientologists, including the group’s head in Paris, Alain Rosenberg, were given suspended sentences of up to two years in prison.

France regards Scientology, which was founded in 1954 by the science fiction writer L. Ron Hubbard, as a sect not a religion. Scientology teaches that followers can expand their mind and reach a state known as “clear” by using Hubbard’s technology, which involves the use of an E-meter.

But the Paris appeals court did not believe that Scientology was able to expand the mind. It ruled instead that the organization “engaged in dishonest maneuvers in order to sell services and books, and draw payments.”

The Church of Scientology has branded these accusations as “absolutely ridiculous.” Spokesperson Eric Roux asked “if you want to destroy a religion, what do you do? You attack its finances. Scientology courses are not more expensive that other courses, and Scientologists are not stupid.”

Thursday’s decision is a “relief,” said plaintiff UNADFI, a group representing cult victims in France. “This ruling marks the end of a long journey for us,” says UNADFI head Catherine Picard, “The victims will get reparations, and the ruling shows Scientology under a new light, exposing its systematic use of illegal practices.”

The case came after the complaints of two women, one of whom says she was manipulated into spending large sums of money on life-improvement courses, vitamins and other products.

Aude-Claire Malton, 32, said she “had been preyed upon when she was psychologically fragile” and spent all her savings, some $28,000 in Scientology courses in 1998.

Scientologist Eric Roux accuses anti-cult groups such as UNADFI of using victims to destroy their religion. “Malton was a normal person, she signed up for a four-year-course, she was satisfied with it.” Roux says Malton’s family convinced her to lodge a complaint.

Malton later dropped her complaint after receiving an undisclosed amount of money from the Church of Scientology.

But that did not deter French courts, who decided to “hit the Church of Scientology hard,” says journalist Emmanuel Fansten, author of "Scientology, Autopsy of a State Sect."

Prosecutors — who are nominated by the Justice Ministry — have “changed their stance” towards the Church of Scientology. In 2006, prosecutors wanted the case to be dismissed. But in 2009, they called on judges to ban the organization and condemn it for fraud.

“Scientology is becoming more and more persona non grata and can face legal action like anybody else in France,” said Fansten, who argues the organization used to wield a lot of influence in France and internationally, which protected it to a certain extent from court action. “Since the 1990s, they have lost a lot of power,” said Fansten. He said several factors have weakened the Church of Scientology, including the anti-Scientology campaign led by the hacker group Anonymous, and the open criticism of former followers. “I think the stance of French courts falls within this context.”

In the United States, several former Scientologists have complained they were forced to work long hours for very little pay. The Church of Scientology has denied these claims.

While several countries do not recognize Scientology as a religion, France is clearly on the frontline in the fight against Scientology. Fansten says France has been fighting the organization since it was included in a parliamentary list of dangerous cults under government surveillance in 1996.

“Traditionally, France and the United States are at different ends of the spectrum when it comes to the treatment of [sect] movements and minority religions,” said Fansten. France sees religious sects as being inherently “suspicious.” Picard agreed France is tough on sects. “It’s is not an easy country because of its basic principles of secularism and republican values,” said Picard.

But Henri Pena-Ruiz, a professor at Science Po and expert on secularism, denies France is attacking cults because they hold particular beliefs. He said the groups come under fire because they break the law.

“Secularism means the state must be neutral and maintain the balance between believers, atheists and agnostics.”

“Believers are free to believe what they want, to practice their religion, but it cannot impose it on the public sphere,” said Pena-Ruiz. When believers start harming others, the State has a duty to act.

This same principle led France to ban the full-face veil in public in 2004.

Ultimately, it was a massacre in the Alps which triggered the authorities’ pro-active approach to cults. In 1994 and 1995, dozens of members of a doomsday cult called the Solar Temple were murdered or committed suicide in collective suicide pacts.

In the wake of the massacre, French parliament adopted strong legislation against cults, creating an agency to monitor them. More recently, it established several task forces within the ministries of health and interior.

“Their strategy is European,” said Fansten, “They have written off France and are already preparing their appeal to the European Court of Human Rights.”

More from GlobalPost: Indian beef ban is shameful use of religion to incite hatred