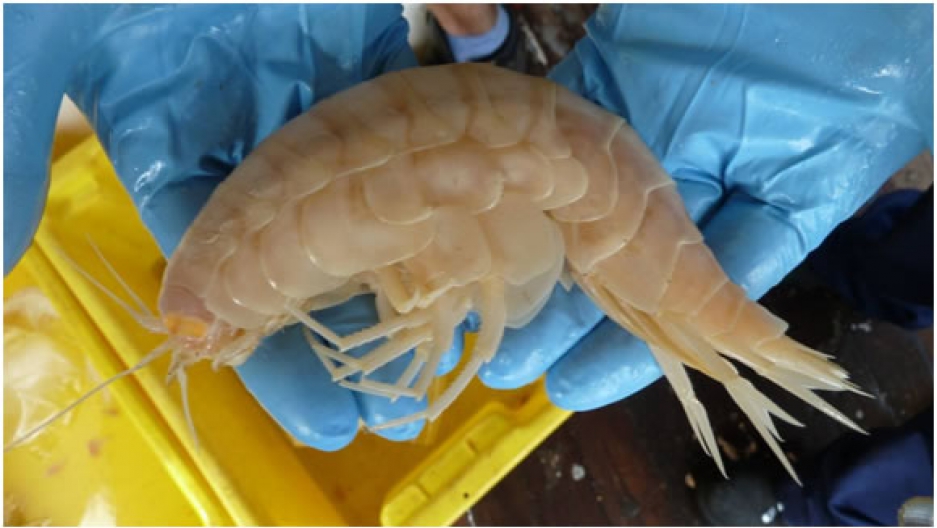 One of the "supergiant" specimens caught in the Kermadec oceanic trench near New Zealand.
Credit: Oceanlab, University of Aberdeen, UK
Share

A "supergiant" amphipod has been discovered in deep seas near New Zealand, said to be more than 10 times the size of other crustaceans of the same type.

The creature, spotted more than four miles deep in the Kermadec oceanic trench, measures 34cm (about 13 inches) long, the BBC reported. Usually, amphipods are between 2 and 3cm.

"It's a bit like finding a foot-long cockroach," said one of the scientists that discovered it, Dr. Alan Jamieson of the University of Aberdeen in Scotland.

When supergiant first showed itself, Jamieson said, "I stopped and thought 'What on earth is that?' whilst catching a glimpse of an amphipod far bigger than I ever thought possible."

More from GlobalPost: Jaw-dropping sighting of scariest sea monster of all time

The 34cm crustacean was caught on a camera fitted in the team's deep-sea trap. Seven others were captured in the trap itself and brought to the surface for examination, the largest of which measured 28cm long.

The scientists, from Aberdeen's Oceanlab and the National Institute of Water and Atmospheric Research in New Zealand, say theirs are the biggest specimens of giant amphipod ever found.

So-called "supergiants" were first discovered off the coast of Hawaii in the 1980s and were subsequently found in the Antartic, too. None longer than 10cm were previously known to exist, however.

According to Dr. Jamieson, the strange creatures vanished just as suddenly as they had appeared.

"A few days after the discovery we deployed all the equipment again on the same site and we didn't photograph or capture a single supergiant," he said. "They were there for a day and gone the next."

See the team at work, courtesy of the Evening Express: