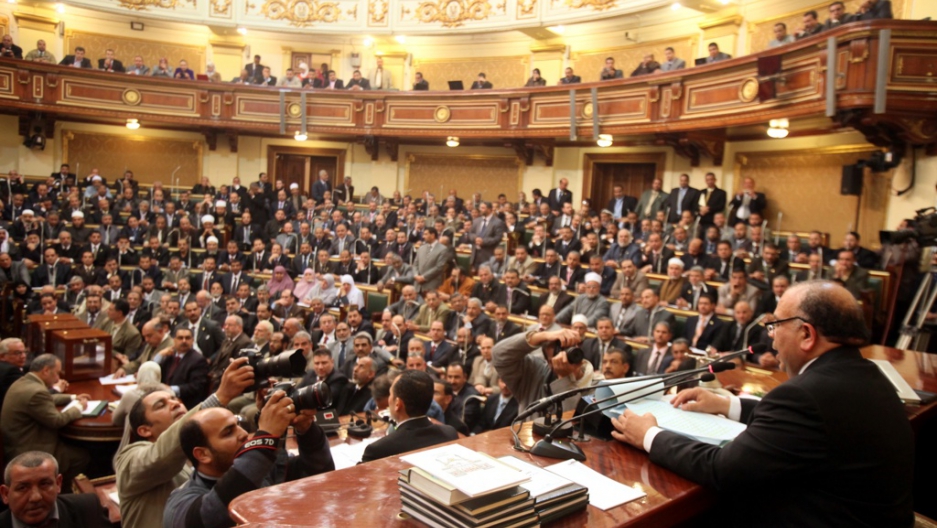 CAIRO, Egypt — Leading members of the Muslim Brotherhood’s Freedom and Justice Party, which recently secured a majority in parliament, say they support the military’s high-profile investigation into two American nonprofit groups operating in Egypt, citing concerns that such groups could be bringing the country more harm than good.

That support, however, has dissapointed rights advocates. They view the investigations as an affront to civil society, and were counting on the recently-elected lawmakers to use their new legislative power as a counter-balance to the country's military leadership.

Several Freedom and Justice Party (FJP) officials, including Supreme Committee members and current lawmakers, expressed their support this week for the probes launched by the general prosecutor’s office into unregistered, foreign-funded organizations, which earlier led police to raid their offices and the government to impose travel bans for at least seven Americans.

FJP leaders, now in the early stages of governance, also said they agree largely with the “NGO law,” under which the investigations are being conducted, throwing their weight behind a regulation forged by ousted President Hosni Mubarak that activists call draconian.

The law requires nonprofit groups to register with the ministry of social solidarity, exposing them to monitoring by domestic intelligence agencies.

“If the travel ban is based on the law to ensure the employees [of these organizations] were not working on harming this country, then I support it,” said Dr. Adel Abdel Menem Ahmed, a member of the FJP’s Supreme Committee in the farming region of Beni Suef, a three-hour drive from the capital, Cairo.

“It is our country’s right to know what these organizations are doing, and the NGO law is important for the country’s security,” he said.

The US-based National Democratic Institute (NDI), International Republican Institute (IRI), and a smattering of local rights NGOs cataloguing regime abuses are accused — though not yet officially — of using foreign funds for activities that “harm the nation.”

“I agree with an investigation under the law, and I support the NGO law in order to know from where these funds are coming, and whether or not they are used to harm the country,” said Mahmoud Helmy, an FJP member of parliament from the southern province of Assiut.

Rights groups here have long rejected the law, saying it cripples civil society and have called for a complete overhaul of the legislation. Karim Medhat Ennarah, a security sector researcher at the Cairo-based Egyptian Initiative for Personal Rights (EIPR), described the law as “extremely repressive.”

More from GlobalPost: Muslim Brothood and activists clash outside parliament

The conservative position of the Brotherhood and its politicians lends credence to recent charges from liberal quarters that despite painting themselves as revolutionaries opposed to the policies of Mubarak and his cronies, the Islamists are just as interested in maintaining the status quo by weakening the more radical, anti-military opposition, and by boosting their own stature.

“It’s unfortunate that the Brotherhood is buying into some of the regime’s rhetoric,” said Shadi Hamid, an expert in Islamist political parties and director of research at the Brookings Institution’s Doha Center, a public policy organization.

Mahmoud Abu Sharkh, a 22-year-old “pro-Palestinian activist” and business student, said he abandoned his own support for the Brotherhood as they waivered in backing activists against the military after the revolt that began in January of last year.

“Human rights is not on the agenda of the Muslim Brotherhood,” he said, adding that he supported the Brotherhood before last year's revolt.

“The most important thing for them is how much power they can gain in Egypt,” he said. “They want to make sure nothing they support will damage their image.”

But Hamid said that is to be expected. Now more than ever, the Brotherhood and the FJP are rational actors in an evolving and often unforgiving political game, he said.

Hamid said the FJP’s stance on the raids of NGO offices last December — initially critical of the heavy use of police force, but later critical of the foreign aid supposedly given to liberal NGOs — is reflective of the views of mainstream Egyptians.

While more and more Egyptians are increasingly alarmed at the military regime’s consistently aggressive tactics, many others have grown suspicious of “foreign interference” in Egypt’s internal affairs during this volatile, post-uprising period.

As a result, it’s “a not-so-surprising” position for the FJP to take, Hamid said, as the newly-elected group attempts to strike a balance to please different audiences.

What is more worrying for the Islamists, Hamid said, is the implications for the Brotherhood and FJP’s budding ties with the United States after years of isolation.

“There is the potential here of harming the US-Brotherhood relationship,” Hamid said. “The US is watching closely, and if the Brotherhood wants to build a relationship with the US, which is important for the economy, they should cooperate with certain US interests [in Egypt].”

One prominent Brotherhood leader, Ahmed El-Nahhas, hinted that the Brotherhood might come around on the issue and ultimately revamp the NGO law. He said many of these NGOs provide crucial services, political and otherwise, where the government fails, and are an essential part of Egypt’s civil society.

“I believe they [the parliament] will stop the implementation of this law,” El-Nahhas said. While he is not a current member of parliament, El-Nahhas is a member of the FJP’s Supreme Committee in Alexandria, and has been an influential Brotherhood figure for years.

“Through setting new laws, the parliament will take this legislation out of the current government’s control,” he said. “The government should monitor the funds, but not through force.”