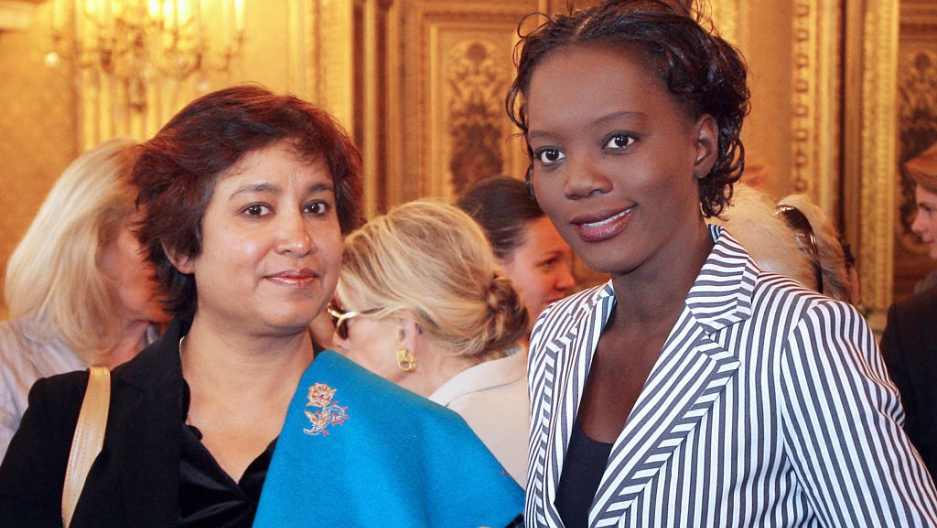 Exiled Bangladeshi writer Taslima Nasreen (L) poses with French Human Rights minister Rama Yade, after she received the Simone de Beauvoir prize for women's freedom, on May 21, 2008 in Paris. Nasreen said on May 19, 2008, that she plans to return to her adoptive home India by August, just months after she was hounded out of the country by Islamic radical death threats.
Credit: PATRICK KOVARIK
Share

Nasreen is unpopular with Muslim leaders because one of her previous books "has been viewed by some of the Muslim faith as offensive," says The Christian Science Monitor.

The book, called “Lajja," takes place after Hindu militants destroyed a mosque in the north Indian town of Ayodhya in 1992. The book tells the story of the tragedies facing a Hindu family in the aftermath of the destruction.

After the book was published in 1993, Muslim leaders threatened Nasreen to death for "blaspheming Islam," says the New York Times.

In 2007, Nasreen was forced to leave Kolkata, her hometown. Her new autobiography, "Nirbasan," describes that traumatic episode in her life. "Are Kolkatans becoming cowards?" she said to the Times of India.

The Publishers and Booksellers Guild, which organized the fair, cancelled Nasreen's appearance just hours before the launch of the book. “We took the decision to cancel the book launch in the larger interests of the people,” guild secretary Tridib Chatterjee announced at a news conference Wednesday night, reports the New York Times. “We cannot jeopardize the safety and security of thousands of visitors to the book fair.”

The fair organizers had originally reserved a large hall for Nasreen's book launch. After news of the cancellation, another writer later helped Nasreen organize the event in an alternate location, says the Times.