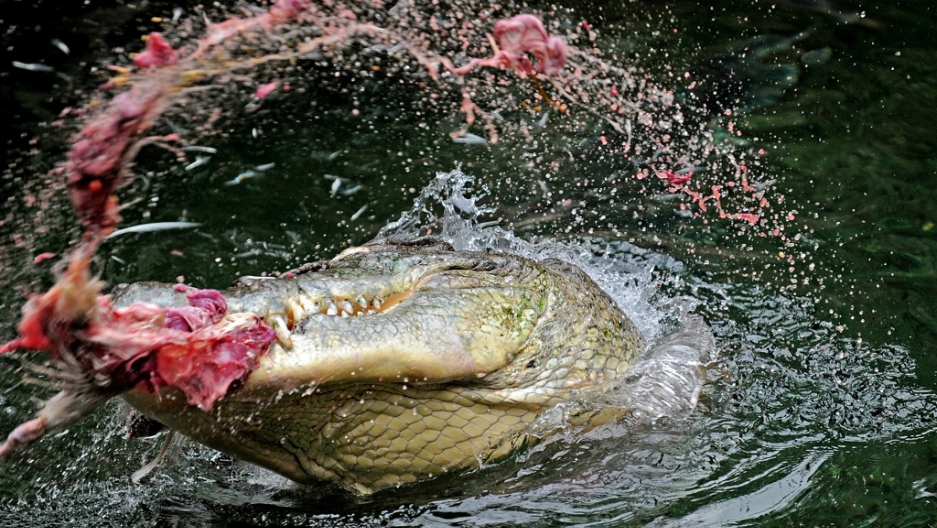 Male crocodile 'Rex', five metres in length and estimated to be 30-40 years old, thrashes the water while holding a chicken in his mouth during the first public feeding session in his new Kakadu Gorge enclosure at Sydney Wildlife World on March 29, 2010.
Credit: Greg Wood
Share

BOSTON — Researchers at the University of Missouri have discovered a now-extinct species of crocodile that has incredibly distinct physiological differences from today's crocodiles.

The skull of the Aegisuchus witmeri, which spent several years in storage after being discovered in Morocco, was first analyzed by Casey Holliday, co-researcher and assistant professor of anatomy.

"Aegisuchus witmeri is the earliest ancestor of our modern crocodiles to be found in Africa," says Holliday. The fossil dates back to approximately 95 million years, meaning that A. witmeri lived during the Late Cretacous period of the Mesozoic era.

The skull's structure has led the research team to some incredible hypotheses regarding shape, size, and habits of this ancient species of crocodile. The top of the skull features a unique pattern of bumps and crevices, which have been left due to a the structure of the blood vessels in the cranium. According to the report, the vessels were probably prevalent in order to supply blood to the crocodile's circular, shield-like mound of skin atop its skull.

This feature, never before seen in crocodile anatomy, has led to the affection nickname, "Shieldcroc." However, Holliday stated that the shield probably looked more like a thick skinned eye spot that not used for aggressive purposes. Rather, he believes it enabled "Shieldcroc" to ward off predators and attract mates.

More from GlobalPost: For the president who has everything ... crocodile attack insurance

Further, the structure of its cranium appears flat, accompanied by a very thin jaw. "We believe Shieldcroc may have used its long face as a fish trap," said co-author of the report Nick Gardner, an undergraduate researcher at Marshall University in West Virginia.

Although estimates of size are subject to a fairly large margin of error, Gardner and Holliday have estimated that "Shieldcroc" had a five-foot-long head and was approximately 30 feet long.

More from GlobalPost: Giant crocodile should be freed, say activists

An plethora of discoveries of new crocodile fossils have caused scientists to reexamine many preconceived notions about crocs. Holliday has suggested that some were maybe even herbivores, and others were better enabled to walk on land.

These discoveries, according to Holliday, are vital assets in order to help scientists better understand the crocodiles that roam the earth today:

Today’s crocodiles live in deltas and estuaries, the environments put under the most stress from human activity. By understanding how these animals’ ancestors became extinct, we can gain insight into how to protect and preserve the ecosystems vital to modern crocodiles.