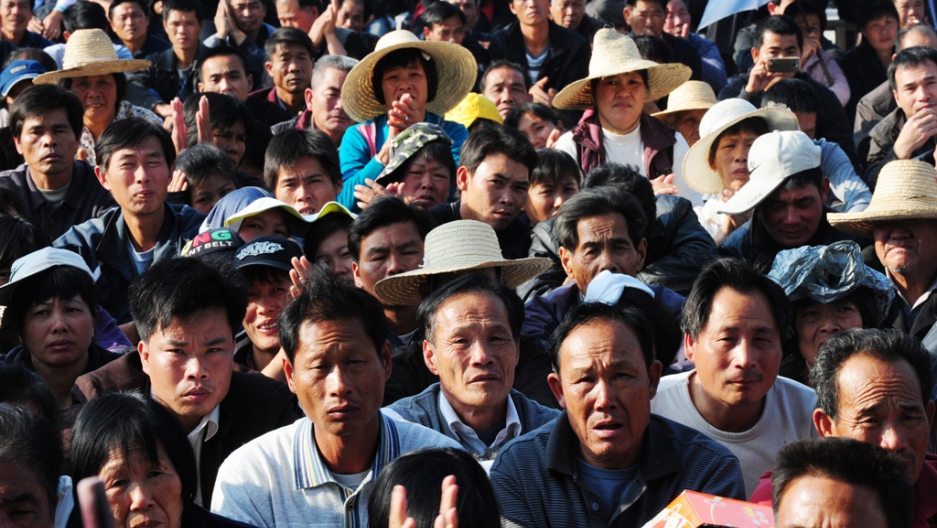 Villagers at a rally in Wukan in China's Guangdong province on Dec. 21, 2011.
Credit: Mark Ralston
Share

BEIJING, China — The rebellious southern Chinese village that exploded in protest last fall, and chased its own government out of town, is in the spotlight again for something unexpected.

Wukan took its unusually forceful foray into Chinese democracy a step further on Wednesday by holding a public vote that would lay the groundwork for upcoming village leadership elections. While China has been experimenting with village elections for more than a decade, Wukan’s direct grassroots democracy is something new — a reportedly fair and open vote held in response to demands for better governance.

More from China: The Wukan model

The vote for an election oversight committee on Wednesday was only a small first step in the overall process, but locals in Wukan saw it as a groundbreaking moment in their efforts to reform. About half of the village’s 13,000 residents cast their ballots, according to local media.

“It is very important,” a village resident who would only give his last name, Gao, said on Thursday.

“Next, we are going to have the formal villagers' committee election,” he added. “The 11 people being elected this time will supervise that election.”

That election is slated for March 1. Another, a third ballot for a lower government post, will follow. Lin Zulian, secretary of Wukan's new Communist Party of China, told the official Xinhua news agency that Wednesday’s election was a necessary step in the overall process.

“This is to ensure fairness in the coming village committee election,” Lin was quoted as saying.

Wukan villagers first began protesting last fall in response to government land grabs — a major source of social unrest in China. By mid-December, after one villager died in police custody, the protests reached unprecedented levels. In a show of force that grabbed headlines around the world, villagers then seized government offices and forced officials out of town.

The case was highly unusual because higher levels of government did not step in to quell the protests or restore the village officials. In the aftermath, Wukan was heralded as a new model of reform.

This isn’t quite Western-style democracy, however, and both village residents and officials who spoke by phone said they were nervous about all the media attention their localized movement had been getting. One villager, Cai Wenling, said that while non-Chinese media had been allowed to cover the election, local officials blocked a Hong Kong newspaper from conducting interviews.

“There was only one big problem. Apple Daily [a Chinese newspaper] tried to go into the election site to do an interview, but the propaganda department of the town stopped them,” Cai said.

Even this story of interference, however, had an unusually good ending.

“They were allowed to do the interview later,” he said. “Our villagers do prefer to be interviewed to express our opinions, so it is a pity that the Apple Daily was stopped at first.”

Among the wider audience in China, as people try to read the tea leaves, Wukan’s election story has sparked both optimism and cynicism.

While some praised the village as a model for democracy in China, others dismissed the story as a small, inconsequential event. Some have taken an even darker view, wondering aloud if Wukan’s elections are merely a government conspiracy to make the Communist Party of China appear reform-minded.

Others were probably closer to the truth, seeing Wukan as a unique example that is unlikely to be repeated elsewhere.

“Wukan is only an exception,” wrote one commenter on Sina Weibo, China’s version of Twitter. “I can't see how there would be another village like Wukan that is able to fight for its rights and still be safe.”

“The next Wukan may have already disappeared,” the poster wrote.