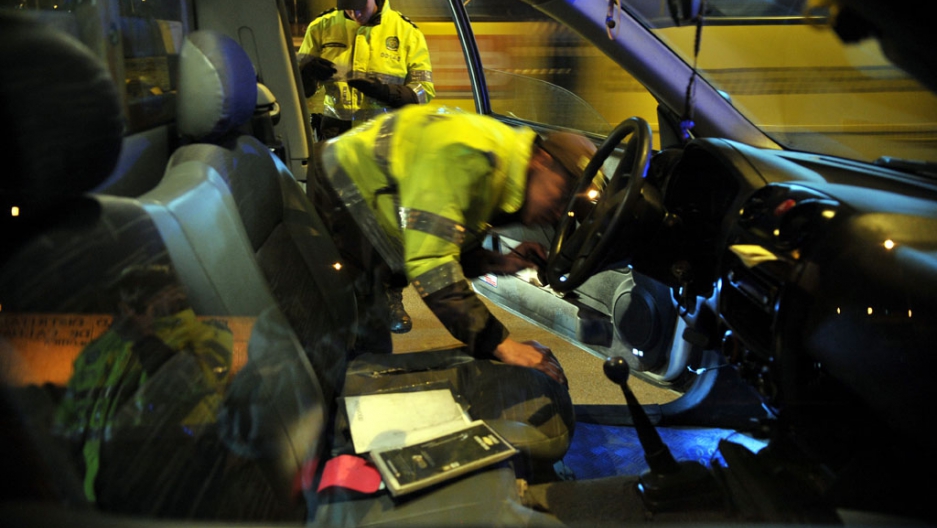 A police officer checks the inside of a van for firearms at a checkpoint in Ciudad Bolivar, a shantytown with one of the highest rates of urban violence in Bogota, Colombia, on February 01, 2012. GUILLERMO LEGARIA/AFP/Getty Images
Credit: GUILLERMO LEGARIA
Share

A gun ban in Colombia's capital Bogotá came into force yesterday, as the city's mayor hopes to pull down the murder rate and end the city's violent reputation abroad, a hangover from the days of drug lord Pablo Escobar.

For the next three months, the ban will allow only active and retired police officers, soldiers, bodyguards of diplomats as well as politicans and the judiciary and certain other private security and gun club members to carry weapons, reports AP.

More than 2,600 murders were recorded in the capital city last year, of which around 1,000 of them carried out with firearms, according to Mayor Gustavo Pedro.

“I ask the entire citizenry to leave your weapons under mattress," the mayor said at a rally in one of the capital's most dangerous districts.

If the temporary ban works to pull down the city's murder rate, Pedro has said he is willing to consider extending it.

Colombia's murder rate is by no means the worst in Latin America. Honduras, El Salvador and neigboring Venezuela suffer many more deaths per capita.

However, Colombia is still considered dangerous by many abroad who still remember the battles between paramilitaries, left-wing guerillas and drug traffickers that still linger. Those are personified by Pablo Escobar whose own city of Medellín imposed a similar gun ban just last month.

Bogotá mayor Pedro was once a member of that violence. He joined a guerilla group in the 70s and himself spent 18 months in prison for posession of weapons.