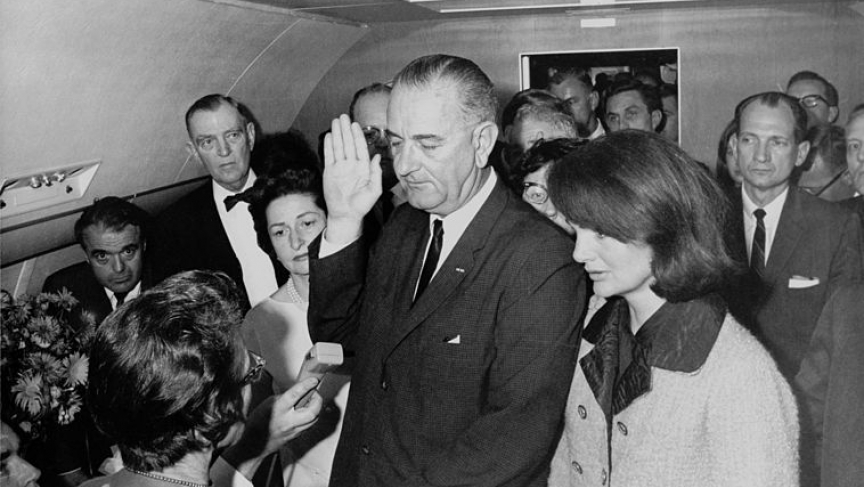 Lyndon B. Johnson takes the oath of office aboard Air Force One after President John F. Kennedy was assassinated. New recordings detail some of the conversations had on the plane that day. (Photo by Cecil W. Stoughton, White House Press Office.)

The National Archives on Wednesday released previously unheard audio from one of the most shocking times in American history.

The two audio clips represent 42 minutes of conversation edited out of earlier recordings that had already been released. The first recording is from the flight deck of Air Force One shortly after President John F. Kennedy was assassinated.

Air Force One was carrying Kennedy's body from Dallas, where he'd been killed, to Washington, D.C. It was also carrying new President Lyndon Johnson, who took the oath of office onboard the plane. Among the recordings was a conversation between Johnson and Kennedy&'s mother, Rose.

The White House and Secretary of State

The White House and Air Force One

"I wish to God there was something I could do. I wanted to tell you that we are grieving with you," Johnson said.

Rose Kennedy can be heard thanking Johnson for his call, and his condolences.

The recordings also include conversations between the White House and a plane carrying the Secretary of State on a mission to Tokyo.

"I read from the AP bulletin, 'Kennedy apparently shot in head. He fell face down in backseat of his car. Blood was on his head. Mrs. Kennedy cried 'Oh no,' and tried to hold up his head,'" a White House staffer in the Situation Room said.

The plane was ordered to return to the United States at once. The plane was still in the air when Kennedy was reported to have died.

"We have report quoting Mr. (Malcolm) Kilduff (White House assistant press secretary) in Dallas that the President is dead," a Situation Room staffer relayed to the Secretary of State's plane.

The audio was purchased by the Raab Collection, a rare documents dealer, from an auction in Pennsylvania. The originals came from the personal documents of Gen. Chester Clifton, Kennedy's military aide. The Raab Collection donated a digital copy of the recordings to the National Archives, who made the digital copies available.