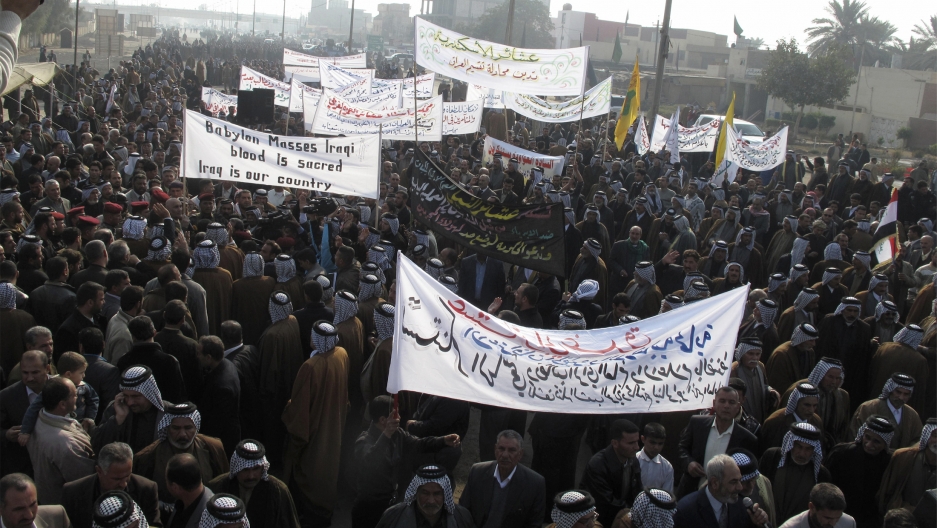 Residents gather during a demonstration in Hilla, 62 miles south of Baghdad on December 24, 2011. Many Iraqis took to the streets to call for prosecuting vice president Tareq al-Hashemi after a fatal series of bombings hit the Iraqi capital. (Photo by Reu

The situation in Baghdad right now is one of — if not the — biggest political crisises since Saddam Hussein was toppled.

“The politicians who are supposed to be leading this country cannot sit down in the same room and have a conversation," said Reporter Jane Arraf.

Arraf is in Erbil, in the autonomous Kurdish region of northern Iraq. In recent days, she spoke with Tariq al-Hashemi, Iraq’s Sunni Vice President. Hashemi fled into exile in Kurdistan several weeks ago after Iraq’s government issued an arrest warrant, charging Hashemi with running death squads.

“He said the last time he really spoke to the prime minister was a year ago. They’ve been communicating through text messages,” she said. “And arrest warrants. “

Iraq is run by a coalition government, engineered in large part by Washington. Thus far the Kurds, notes Arraf, have been the “kingmakers.”

“They’re being looked at here as the people who could possibly solve this. But there are so many missing pieces, no one is entirely sure it can be solved,” Arraf said.

She says the Kurds would like to convene a conference that would bring together the Kurdish president, along with Iraq’s Prime Minister Nouri al-Maliki, the head of the Sunni- backed party, and possibly Shiite leader Muqtada al-Sadr.

“The Kurds backed al-Maliki when he didn’t have enough support to form a government, and now Barzani feels that al-Maliki has betrayed him. And a lot of people feel that," Arraf said. "What we’ve got really is a Prime Minister fighting for his job, a very polarized political system, and really not very much at all getting done in the country. “