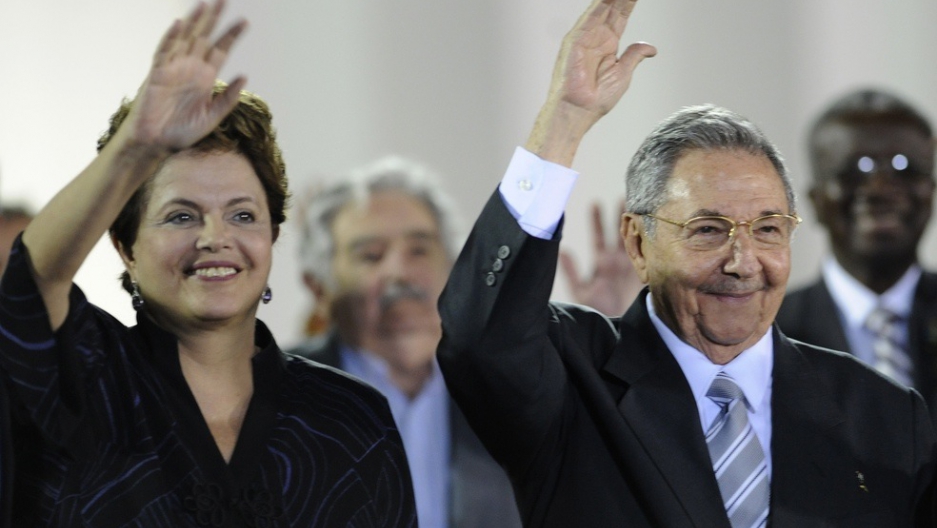 Or do they stick to official protocol and take political heat from Cuba’s critics once they get home?

Such was the dilemma confronting Brazilian President Dilma Rousseff on her first official visit to the island this week, after days of media build-up and some canny nudging from Cuban blogger and opposition activist Yoani Sanchez.

Read more: Sanchez vs. the state

In the lead-up to Rousseff’s arrival, Sanchez publicly pressured her for a meeting — or at least some showing of sympathy for Cuba’s dissidents — drawing parallels between her own struggles against the Castro government and the political persecution Rousseff once suffered as a young activist.

Though the growing commercial ties between Cuba and Brazil were the stated purpose of Rousseff’s trip, some regional observers saw something more: a chance to measure Brazil’s emerging role as a Latin superpower and self-styled global defender of human rights.

What would Rousseff say about rights in Cuba, and specifically, the 36-year-old Sanchez, whom the Castro government considers a “mercenary” of the United States and won’t let travel?

Read more: What happened to a Cuban Autumn?

“Brazil gave the visa to the blogger,” Rousseff told reporters Tuesday, before going on to meet with 85-year-old Fidel Castro. “The rest is not a matter for the Brazilian government,” she said.

It seemed especially noteworthy that Rousseff declining to mention Sanchez by name — even though Brazil’s foreign ministry held a press conference the previous week to announce it had granted Sanchez a visa to visit the country, after she’d been invited attend the Feb. 10 screening of a documentary in which she appears.

It’s still not clear whether Cuba will let Sanchez leave.

Sanchez later said she was disappointed Rousseff didn’t reach out to opposition activists during her visit. But it should hardly have come as a surprise.

The same Brazilian leaders who have guided the country to its new global prominence — former president Luis Ignacio “Lula” da Silva, and now Rousseff—both have deep ties to Cuba.

Their Workers' Party has long been a loyal supporter of the Cuban government, and Rousseff herself was inspired by Fidel Castro’s Cuban Revolution when she fought against Brazil’s military rule in the 1960s — only to be tortured and jailed for three years.

Still, reporters pressed Rousseff on whether she would bring up human rights in Cuba during her three-day visit, which ended Wednesday went she departed for Haiti.

Rousseff didn’t take the bait. Instead, she used the opportunity to criticize the US trade embargo against Cuba and prison camp at the Guantanamo naval base, then suggested it wasn’t her place to cast judgment on other nations.

“I don't think human rights are a stone that we can cast at other nations,” said Rousseff. “We in Brazil have our problems too.”

And Rousseff, who will visit Washington in March, clearly hadn’t come to Cuba to talk about problems. Instead, her visit highlighted her country’s rapidly-expanding trade with the island, much of it financed by the Brazilian government.

In recent years, Brazil has boosted its global standing by offering billions in loans to developing nations, especially in Latin America and Africa. The country will host the World Cup in 2014 and the 2016 Summer Olympics, events that have reinforced its status as an ascendant world power.

Rousseff’s Cuba trip offered one window into the kind of world power Brazil plans to be.

Rousseff announced in Havana this week $600 million in new credits to the Castro government, including $400 for the purchase of Brazilian food exports and another $200 million to help boost Cuba’s feeble agricultural output.

A Brazilian construction firm, Odebrecht SA, is overseeing one of the largest capital projects on the island, a $900 million upgrade to the port of Mariel, with $640 million in Brazilian financing.

The project will make the city — famous as the site of the 1980 mass exodus to Florida — into Cuba’s premier cargo port and the hub of the island’s emerging offshore oil industry.

In the end, Rousseff’s visit suggested Brazil’s engagement with Cuba is likely to more closely resemble China’s, viewing the island as a politically-simpatico business partner and a market for Brazilian exports subsidized by Brazilian government loans.

The South American giant tallied $642 million in trade with Cuba last year, making it one of the island’s biggest commercial partners.

And that balance is likely to grow, with a subsidiary of construction firm Odebrecht announcing that it would invest in a Cuban sugar mill — viewed as the first step toward large-scale production of ethanol on the island.

The announcement is especially significant because Fidel Castro has long opposed the production of fuels from foodstuffs, despite the devastating decline of the island’s own sugar industry in recent decades and long-held reluctance to allow foreign investment in the sector.

“Fidel’s resistance in this field is being overcome,” said a Brazilian Foreign Ministry spokesman.

Since few have ever been able to overcome Fidel Castro’s resistance to anything, it was also a sign of the way Brazil diplomacy may be designed to work — built on the strength of the country’s bankers and engineers.