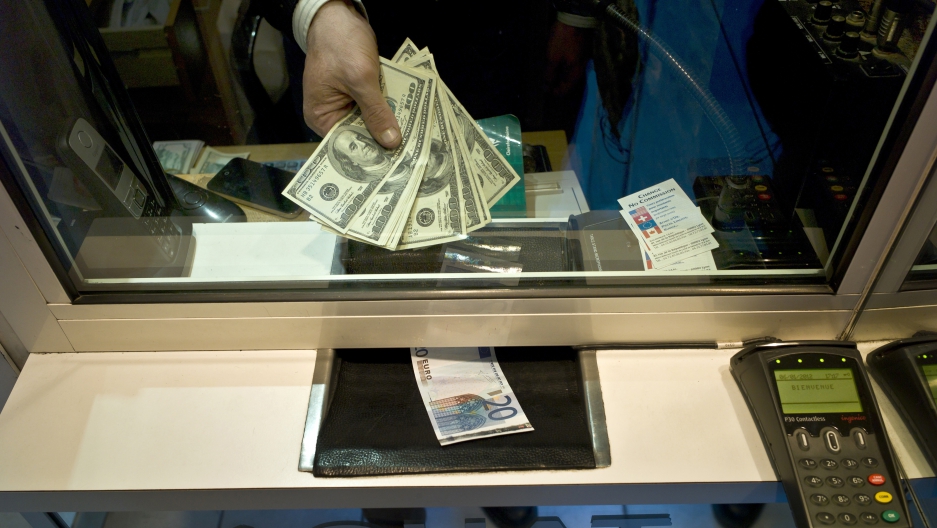 An employee of a currency exchange office displays US dollars next to a 20-euro note on Friday in Lyon. The euro tumbled to yet another 16-month dollar low on Friday as the single currency's fortunes were hit by positive US jobs data and ongoing fears over the eurozone debt crisis.
Credit: JEAN-PHILIPPE KSIAZEK
Share

The faltering European economy is reducing output at factories in Europe and Asia, a new business survey shows. Reuters reports that Asia could now be vulnerable to a recession due to Europe's debt crisis.

"As external demand is now fading clearly, Chinese exporters are facing increasing difficulties," announced China's Finance Minister Xie Xuren. A Reuters poll expects Europe to be in a recession for the first half of 2012.

As CNN reports, the eurozone debt crisis began in Greece two years ago. Prime Minister Lucas Papademos announced Tuesday that Greece is now trying to finalize a bail-out with the private sector. The European Union also agreed to a $130 billion bailout with Greece in October. Officials estimate that youth unemployment is at 47 percent in Greece.

More from GlobalPost: European officials blame the Euro crisis on the US

The latest business survey, released Wednesday, shows how dramatically the crisis has affected factories that export goods to Europe. In South Korea, exports to the European Union dropped 45 percent, resulting in a 6.6 percent drop in output overall, Reuters reports.