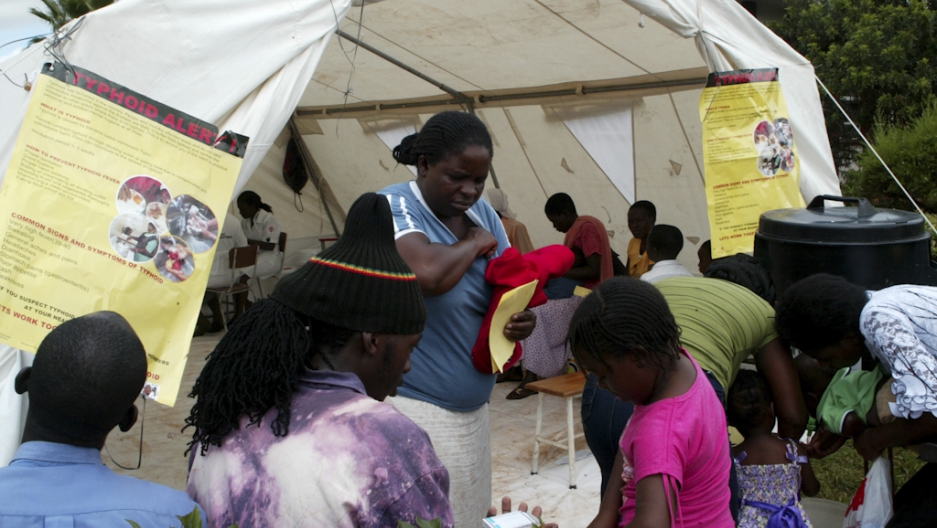 Patients receive medication at a typhoid screening and treatment centre setup in a temporary tent at a clinic in the Kuwadzana township, on January 24, 2012, in Harare, Zimbabwe. Doctors reported at least 800 cases in a typhoid outbreak in the Zimbabwean capital.
Credit: JEKESAI NJIKIZANA
Share

JOHANNESBURG, South Africa — Zimbabwe has treated more than 1,500 people for typhoid, with up to 50 new cases being reported every day in an outbreak of the bacterial disease centered on a Harare township.

Health Minister Henry Madzorera said 1,500 typhoid cases had been treated as of December 31, Agence France-Presse reported. Between 30 and 50 cases are reported per day, Madzorera told reporters in Harare, the capital.

The typhoid outbreak has been blamed on poor water and sanitation conditions, with Zimbabwe's infrastructure having crumbled under years of crisis. Kuwadzana, an impoverished Harare township, has been the epicenter of the outbreak.

"The progressive deterioration of public health infrastructure have seen such rare diseases like typhoid becoming more commonly encountered within our population," Madzorera said.

Zimbabwean authorities said today that poor townships will get uninterrupted water supplies, while wealthy suburbs will get water twice weekly because they can afford to buy water, the Associated Press reported.

While no deaths have been reported in the last three weeks, the Zimbabwe Association of Doctors for Human Rights said Sunday that the government lacked urgency in dealing with the public health situation, and the outbreak could worsen.

Typhoid, a disease that incubates over three weeks, has been traced to contaminated meat and fish sold by street vendors. Samples have tested positive for Salmonella typhi, the bacteria that causes typhoid.

Harare's health director, Dr. Prosper Chonzi, has warned the continuing poor sanitation conditions could even lead to an outbreak of cholera.

In 2009, more than 4,000 people died in a devastating cholera outbreak blamed on a lack of clean water and the collapse of Zimbabwe's sanitation system.