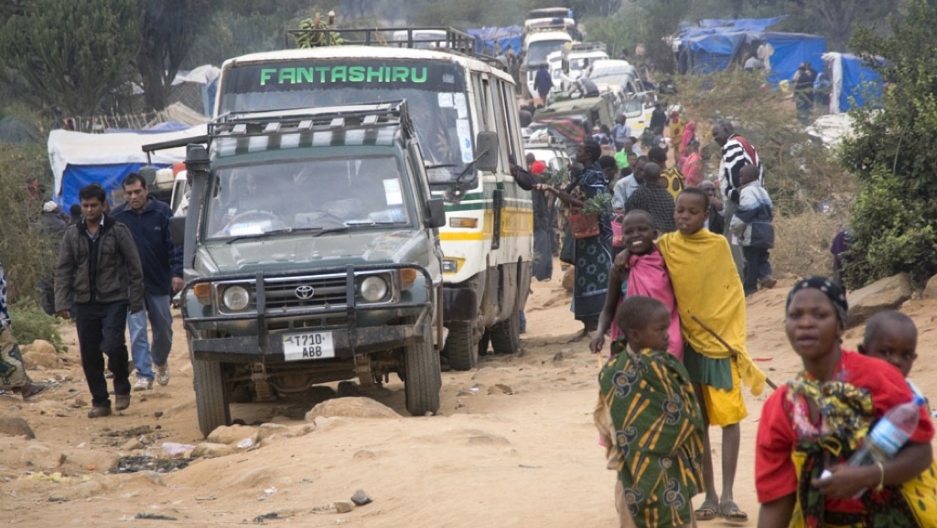 LOLIONDO, Tanzania — Rehema Msigala hasn’t slept a wink, but fatigue won’t stop her from pushing through the crowd to catch a front row glimpse of the old man shrouded in legend.

After camping out all night following a 500-mile journey, she’s among the thousands who have gathered at this remote village near the Tanzania-Kenya border, awaiting the appearance of 76-year-old Ambilikile Mwasapile, the “miracle healer” of Loliondo.

Known as “Babu,” or “Grandfather” in Swahili, the retired Lutheran pastor became an overnight sensation in late 2010 when he began distributing a liquid herbal medicine he claims will cure virtually any chronic illness, including diabetes, cancer, and HIV/AIDS.

Since then, local officials said, he’s treated nearly 4 million visitors, drawn by tales of miracle healings that have spread to all corners of East Africa.

Just past 7 a.m., after ambling to the gate of his small thatched house, Mwasapile recounted a version of his famous narrative. As he told the crowd, God came to him in a series of dreams, revealed the cure, and instructed him to begin healing in Loliondo.

“You must only drink one cup,” he warned. “If you bring it home to give to a sick relative, it will be poison.”

Even for those young and fit, the pilgrimage here is not an easy one. Nestled in the windswept village of Samunge, Mwasapile’s operation is nearly 100 miles from the nearest accessible paved road. Unable to afford four-wheel drive vehicles, many make the journey packed into dilapidated minibuses, arriving tired, sore and caked in dust. Until recently the line of vehicles entering the village snaked for miles. At least 50 people have died in transit, according to local officials.

These days, the vehicles are arriving in fewer numbers but the controversy surrounding Mwasapile remains.

Despite the Loliondo frenzy, the herb at the heart of Mwasapile's cure is common across much of Africa. Known in Swahili as mugariga,  or by taxonomists as Carissa edulis, the leafy shrub has long been used by local Maasai and Sonjo people to treat ailments as diverse as diarrhea, venereal diseases and malaria.

In March, Tanzania’s National Institute for Medical Research released the results of a study that concluded the dose in Babu’s “cup” is safe, though it did not endorse the drink as a "cure."

Research has shown that Carissa edulis can have a therapeutic effect on a variety of ailments, including herpes simplex, an opportunistic infection that commonly afflicts people with HIV/AIDS.

A 1996 study by the University of Alexandria in Egypt found that treatment with Carissa edulis temporarily reduced blood glucose levels in diabetic rats, a phenomenon reported by numerous diabetic visitors to Babu.

While the plant may provide relief from chronic ailments, Tanzanian medical professionals interviewed by GlobalPost said they have yet to see any cases of confirmed cures.

On the contrary, said Aisha Ahmed, a physician based in Dar es Salaam, the country’s commercial capital, a Loliondo trip can often make things worse.

Following Mwasapile’s word, most patients insisted it’s not the cup itself that cures, but the power of God invested in the cup through Babu. With the healing process an act of faith, many assume the cure will work and stop taking previously prescribed medicines — often with severe consequences.

“A lot of HIV patients will come after visiting Babu to get re-tested,” Ahmed said. “When they test positive, we have to counsel them again. They’re disappointed, they’re depressed. Many of them have stopped their treatment and have probably practiced unsafe sex.”

Despite her disapproval, Ahmed did not explicitly condemn Mwasapile’s operation. Rather, she presented the Loliondo sensation as a disturbing consequence of a wider national health-care crisis.

Unable to afford treatment in even basic public hospitals, she said, poorer Tanzanians rely predominantly on traditional healers or even alleged purveyors of witchcraft.

Belief in the supernatural has led to other unsavory fads. In one particularly gruesome example, scores of albinos are murdered in Tanzania each year because witchdoctors covet their skin and body parts for potions many believe will bring wealth and good fortune.

While a far cry from ritual killings, critics of Mwasapile argue his “cure” may be just as deadly.

Though Tanzania’s government has remained quiet, officials in neighboring Kenya have condemned his operation.

In March 2011, Kenyan Minister of Public Health Beth Mugo called for Mwasapile’s arrest on grounds that he has cheated the public. Antiretroviral treatment centers across Kenya have reported deaths of patients that stopped treatment after visiting Loliondo, said Alloys Orago, director of Kenya’s National AIDS Control Council, in July 2011. He also warned that those defaulting on antiretroviral doses could potentially spread a drug-resistant strand of HIV and erode gains already made in the HIV/AIDS fight.

“Many people are dying,” Orago said.

Whether or not he is brewing a public health crisis, Mwasapile still has many admirers — including the thousands who continue to profit from his operation.

Among the scores of Babu beneficiaries are vehicle owners and drivers across East Africa and Loliondo residents, who’ve seen their rural backwater transformed into a hive of commerce.

“We were a very poor village before,” he said. “Babu changed everything.”

And what of Mwasapile’s fortune? Compared to a journey that costs some as much as $100, the retired pastor sells his cup for a modest 500 Tanzanian shillings, roughly 30 U.S. cents. With the numbers he’s drawn, this still means hefty revenue. Yet with staff to pay, supplies to purchase, and a percentage of funds reportedly going to the Lutheran church, it remains unclear how much he profits.

Yet in a country where an estimated 97 percent of citizens live on less than $2 per day, most cure-seekers admit their miracle man is no pauper.

“I’d like to go to university,” said Msigala, smiling as she awaited her plastic cup of bitter, green-hued liquid.

“But I cannot afford it now. Maybe I should become a healer.”