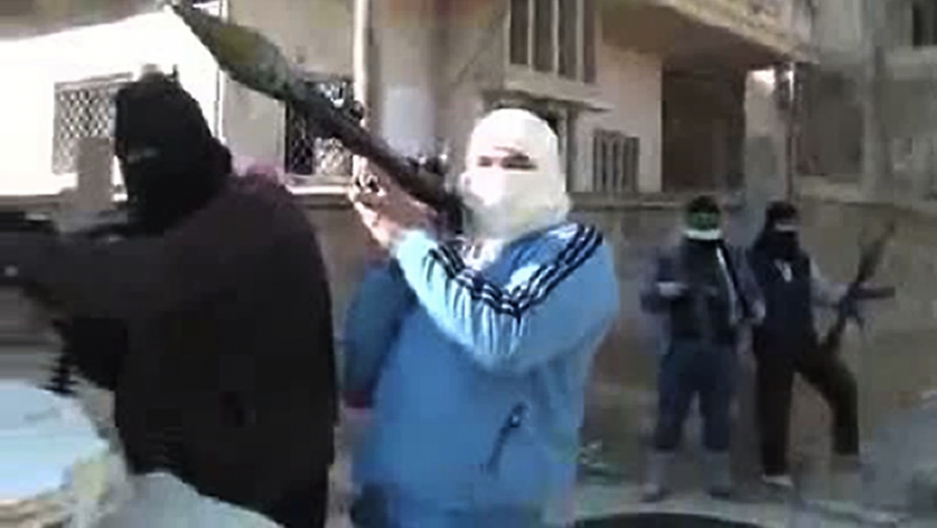 An image grab taken from a video uploaded on YouTube on January 29, 2012 shows armed men, said to be members of the Free Syrian Army (FSA), standing guard in a street in the central town of Rastan.
Credit: YouTube screenshot
Share

BEIRUT, Lebanon — The uprising in Syria progressed further on Tuesday as Syrian government troops cleared the eastern Damascus suburbs that were briefly controlled by rebel forces over the weekend and Free Syrian Army-aligned groups claimed control of the central town of Rastan on Tuesday, according to the Associated Press.

Reuters reported that the eastern suburbs of Damascus had settled into a frightened calm:

"The suburbs are under an unannounced curfew. A small groceries shop opened this morning and soldiers came and beat the owner and forced him to shut down," said an activist in the Ain Tarma neighborhood on Tuesday.

Numbers released by the Local Coordination Committees, which are unverified, suggest that Monday was one of the bloodiest days of the 10-month-old uprising against President Bashar al Assad's rule, with over 100 dead. In response, rebels called for a "day of mourning and anger" on Tuesday.

Tuesday's developments coincide with a shift of attention toward the United Nations, where the Security Council today considers an Arab League-backed resolution calling for Assad to step down. Moscow has promised to veto the resolution because of its close ties with Damascus. Rebels rejected Russian-backed peace talks, stymying attempts by the Kremlin to avoid a Security Council showdown.

While visiting Amman, Jordan, UN Secretary General Ban Ki-moon expressed his wish Tuesday that the Security Council would "be united and speak in a coherent manner reflecting the wishes of the international community," according to Reuters. Appearing to align himself against Russia's threatened veto of a Security Council resolution calling for Assad to step down, Ban said "it is crucially important for the Security Council to act on this."

Both Secretary of State Hillary Clinton and foreign ministers from Great Britain and France are in New York for the vote, which promises "further measures" if Assad fails to halt the violence or step down within 15 days. Russia fears Western countries will use the resolution as a pretext for military intervention, like the air strikes conducted in Libya last year. In Washington on Monday, President Obama's spokesperson said Assad's fall is "inevitable," Al Jazeera reported.

Syria's ambassador to Lebanon, Ali Abdel Karim Ali,  said in an interview on Al-Manar television on Tuesday that Lebanon was the main trafficker of arms to Syria's rebels, according to Now Lebanon.

"We are not surprised at the lack of wisdom or rationality of these statements and regret that they are still issued by countries that are used to making the Middle East an arena for their follies and failures."