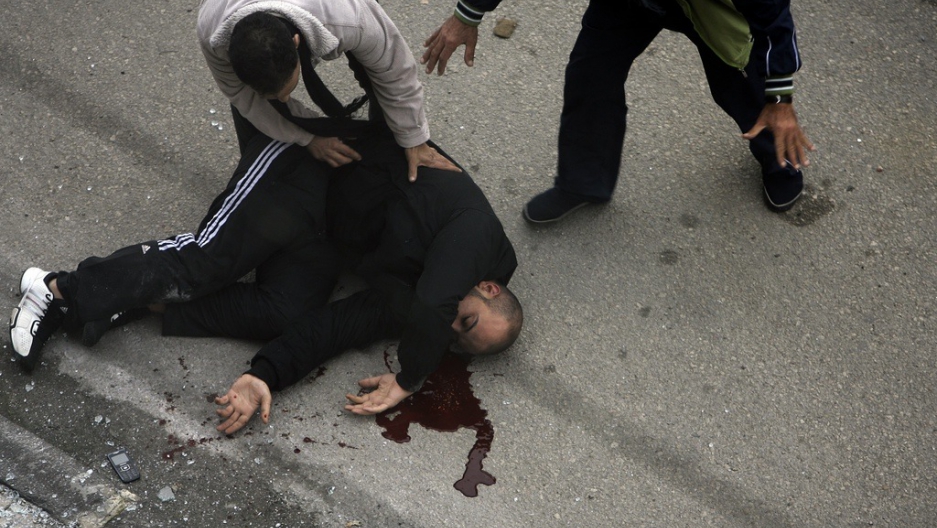 A seriously injured Syrian man lies on the ground following a rocket attack in on January 11, 2012, in the western city of Homs.
Credit: JOSEPH EID
Share

DAMASCUS, Syria — Sitting down for breakfast at the Sheraton hotel in Damascus last Saturday, none of the Arab League observers betrayed any sense it would be their last day on the job.

Until then they had set out most mornings to assess whether Syria's regime was complying with a peace agreement signed by Damascus and the League late last year.

Unquestionably, their work was difficult. The crisis in Syria is rapidly evolving into a civil conflict that has left more than 5,000 people dead since March last year, according to the United Nations. Working amid a regime that has appeared to have perfected its ability to stage-manage, the men taking to Syria's countryside in the hi-visibility shirts and white hats had little chance of success.

On that cold Saturday morning, the observers’ destination was Rankous. Almost an hour's drive north of Damascus between the snow-covered Christian towns of Saidnaya and Maaloula, Rankous is one of hundreds of anti-regime protest hubs around Syria.

By Saturday the town had been out of the regime's control for almost a week, and 33 people had reportedly been killed as the Syrian army pounded Rankous in an attempt to wipe out the armed resistance there. The morning the observers arrived, a tense standoff was apparent.

The convoy of police, Syrian military and state television vehicles sped through the snow and traffic, delivering all the signs to the passing populations that the observers meant business. Such was the rush to reach the scene that two television buses crashed into each other en route.

Entry to Rankous was blocked by a large presence of soldiers who quickly lined up to welcome the mission and to tell stories of the armed gangs now controlling the center of the town.

The observers were shown holes in sandbags purportedly caused by bullets. "This happened last night at about 11 p.m.," said one soldier, stationed inside a snow-covered checkpoint. "They drove down to the edge of our checkpoint and started shooting at us."

Then the observers' driver decides he will not drive into Rankous, past a hill and about a half-mile away. He is too afraid.

A microbus carrying just a few passengers stopped and the Syrian TV cameras grouped round them like hyenas on a kill. The passengers, a couple of young men, were dazed. They could read the word "Al-Dunia" written on the reporter’s microphone. Al-Dunia is a satellite TV channel run by President Bashar al-Assad’s powerful cousin, Rami Makhlouf. The men knew what they should and should not say.

Next, a truck driver is ordered to get down from his vehicle by one of the soldiers. Gingerly, he does so.

"We are here to help you and to listen to you," Ambassador Jaafar Kibeida, a leading observer representative, told him as the Syrian television cameras looked on. The truck driver thanked Kibeida and said that although there were problems, he hoped "the situation" would soon end.

Then a taxi driver passes but refuses to stop to speak with the observers. A security officer glared at him.

For the Syrian journalists, pro-regime and clamoring, the event seemed to be something of a childish exercise. They laughed and joked, shot the same scenes over and over. There were no questions for the observers.

For about 30 minutes, the observers walked in circles around the checkpoint. One did attempt to stray off and approach a nearby house, but the cameras were soon in pursuit. "We are not political people," a local man told the observer as the cameras recorded. "We are one people; we just want peace."

Two older army officers arrived on the scene shortly after. "The people in there," one said, pointing to the town "speak foreign languages. They are from Afghanistan and Turkey and other countries."

And they did not. Instead, they got back into the Mercedes, and the convoy of soldiers and police sped back together to Damascus.

Within hours, Rankous was under attack from government tanks and snipers. Four days later, the town remains under siege.

Back at their hotel, the monitors could only report how government troops had been shot at. They could not describe the truth.

The Arab League pulled out 55 observers on Jan. 24, just a few days later. Another 110 will stay on to continue the mission until Feb. 23. But the Syrian government has said it no longer wants “Arab solutions” to the crisis.

Written and reported by a GlobalPost correspondent in Damascus, whose name has been withheld for security reasons.