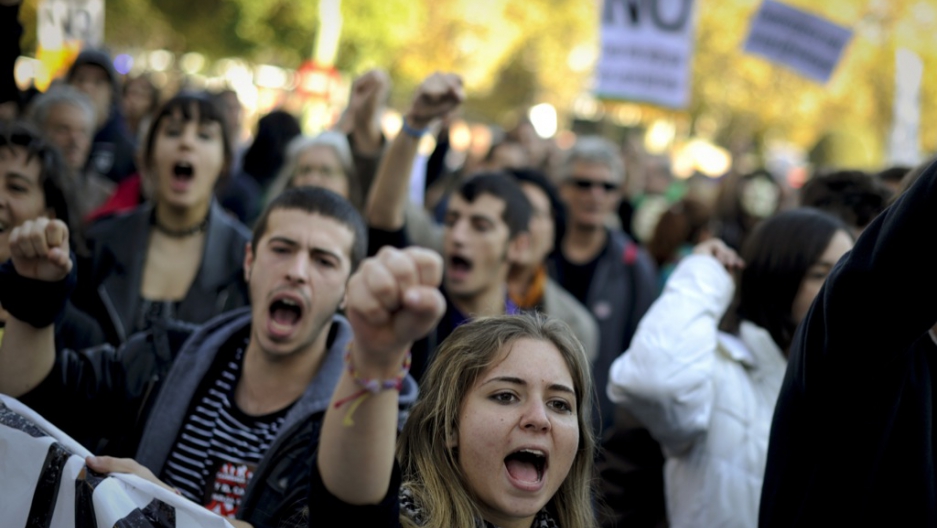 BRUSSELS, Belgium — They are calling them Europe’s lost generation.

Almost five-and-a-half million young people are unemployed across the European Union, according to figures released on Tuesday.

In the course of 2011, 241,000 Europeans under 25 joined the ranks of the jobless, illustrating the depths of the EU’s economic crisis. In Spain and Greece almost half the young people are out of work.

The stark data has thrown into context the attempt by EU leaders meeting on Monday night to put renewed focus on the need for growth and job creation in order to balance the wave of economic belt-tightening designed to bring down deficits and debts.

Critics say the summit package was another example of the too-little-too-late from the EU leadership.

"This start is extremely weak,” said Hannes Swoboda, an Austrian politician who leaders the Social Democrat faction in the European Parliament. “The fight against youth unemployment remains weak, and concrete measures to create jobs have not been taken up.”

Swoboda pointed out that while the fiscal pact adopted at Monday’s summit enshrines austerity in a treaty by committing nations to balance their budgets or face fines, the leaders contented themselves with a mere statement of good intentions when it comes to pro-growth measures.

The leaders are supposed to flesh out their proposals to give tax breaks to firms that hire young people, direct funds to skills-training programs and encourage greater cross-border worker mobility, when they meet again in March.

European Commission President Jose Manuel Barroso wrote Tuesday to the leaders of the eight EU nations with the highest youth unemployment urging the creation of “action teams” to draw up national programs to get youngsters into work.

“Our objective is to make sure that policy measures and all available EU and national funds are focussed on these key challenges,” said Barroso’s letter to Irish Prime Minister Enda Kenny. “This will only happen if we convey a sense of urgency.”

Several European leaders are concerned that the emphasis on austerity is stifling any prospects of revived growth and that failure to tackle unemployment, particularly among the young, could provoke a potentially violent backlash.

However, German Chancellor Angela Merkel is determined that the fight to balance budgets and cut debts remains very much the centrepiece of Europe’s response to the crisis.

Germany is, of course, in a stronger position than most. Its December unemployment was just 5.5 percent according to Monday’s figures from the EU statistics agency. That compares to a euro zone average of 10.4 percent and 22.9 percent in Spain, the worst-affected EU-nation.

Editor's note: This article has been updated to add EC President Barroso's comment.