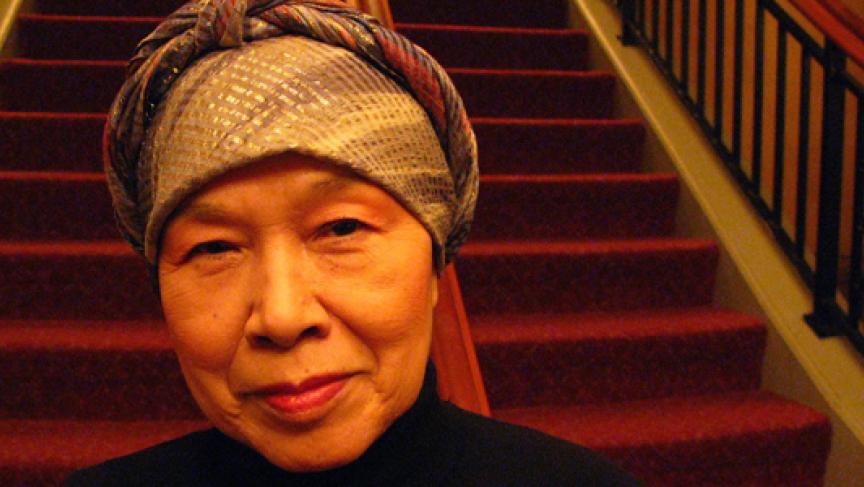 Share
The World's Alex Gallafent looks at the career of Eiko Ishioka, a Japanese designer who won Oscar and Grammy awards for her work. Ishioka died recently in Tokyo at the age of 73. You may not know her name, but you might have seen some of her work. I met Eiko Ishioka about a year ago, when she was working on the Broadway musical "Spider-Man: Turn Off The Dark." We talked backstage, surrounded by some of the surreal costumes she'd designed for the show, including a lizard-like Green Goblin. Spider-Man was only the latest job in a career of extraordinary breadth. Ishioka won the 1993 Oscar for costume design for her work on "Bram Stoker's Dracula." But her association with the film's director, Francis Ford Coppola, went back to a project in the mid-1980s that upended stereotypes about Japan – the film "Mishima." Ishioka said that before "Mishima" most Americans making movies about Japan focused on ninja, geisha and samurai. "So as a Japanese, I was very frustrated," she said. The movie was about Yukio Mishima, a Japanese novelist and activist who committed ritual suicide in 1970. "This movie's an American film, but talking about a Japanese subject, so I was very excited," Ishioka recalled. "But at the same time I was very frightened." Eiko Ishioka had built her career as an art director for Japanese ad campaigns. Now she was working in the US as a production designer, or a costume designer. She loved it. She said that the designer's job is typically a passive one. "When I receive very exciting job, turn to the very active, like I want to express my own creative philosophies, like a fine artist." That didn't mean a specifically Japanese philosophy. "I want to bring my own identity as a human being. But I don't need to bring a Japanese identity. I don't even know what Japanese identity is. Japan is a really complicated country." Maybe it was Ishioka's refusal to accept simple categories that allowed her to jump from movies to designing racing outfits for the Canadian speed skating team – outfits that would later inspire her designs for the musical "Spider-Man". It's no surprise then that an American jazz musician selected her, a Japanese artist, to dream up a cover for his album, one named in honor of a South African civil rights campaigner. The album was "Tutu"; the jazz musician, Miles Davis. "I observed his face, his hand – incredible symbol of his life," Ishioka said. "So I said, this is it, this is perfect. I want to make his album with his face and hand." Eiko Ishioka won a Grammy for her work on "Tutu" – a series of striking close-up photos of Miles Davis, shot in stark black and white. Ishioka died in Tokyo. But for the last 30 years her main base was New York. Not that it mattered. "I was completely free spirit," she said. "Any kind of exciting job, I wanted to do it."