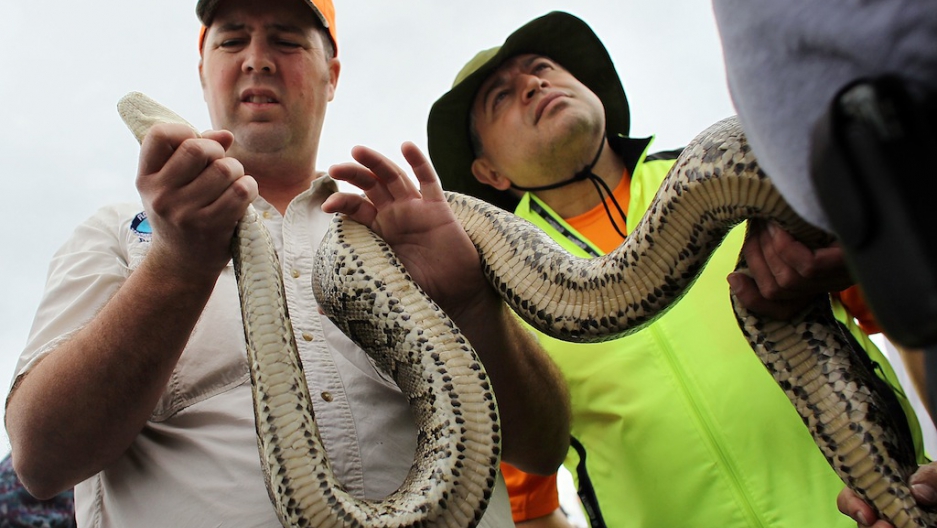 Brian Jones (L) and Ismael Vasquez hold a Burmese Python that was being used for hands on training during a Florida Fish and Wildlife Conservation Commission nonnative snake hunt training session on February 22, 2010 in Miami, Florida.
Credit: Joe Raedle
Share

Burmese pythons to be precise. More than a few overwhelmed Floridian pet owners have released their snakes into the wild. Turns out, these slithering monsters are extremely effective predators in southwest Florida’s tidal swamps, where they have decimated the native mammal population, the BBC reports.

According to a report in PNAS journal, the snakes, which are native to Asia, "now are found throughout much of southern Florida, including all of Everglades National Park." Their numbers have jumped over the past decade and they eat birds and mammals,

The report said the researchers "documented a 99.3 percent decrease in the frequency of raccoon observations, decreases of 98.9 percent and 87.5 percent for opossum and bobcat observations, respectively, and failed to detect rabbits." This alarmed researchers, who noted that these are usually the easiest animals to find. Not a good sign for the harder to find mammals.

National Geographic noted that 12 years ago "it was common to see mammals such as rabbits, red foxes, gray foxes, Virginia opossums, raccoons, and white-tailed deer on roadways after dark," but no longer.

Until Florida finds a solution to this piquing python problem, anything a python can fit down its cavernous throat is likely to see its population decline.