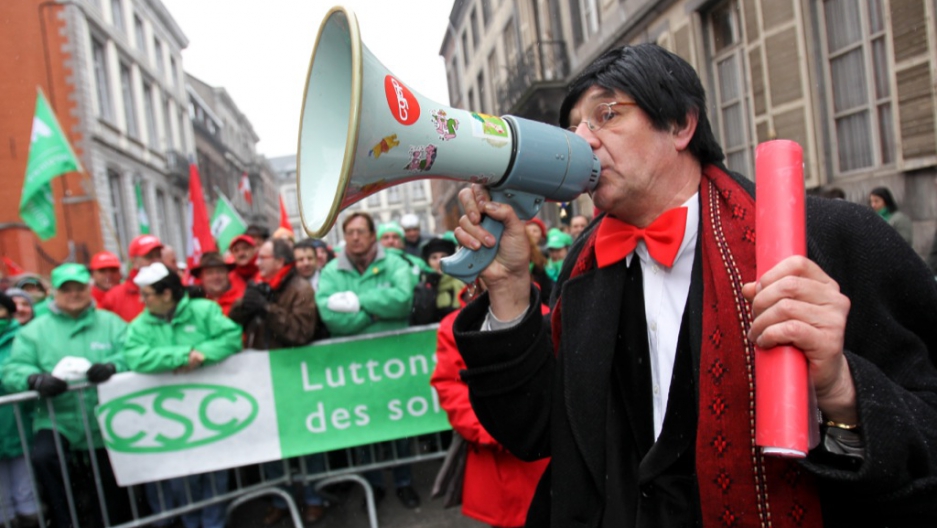 A man dressed as Belgian Prime Minister Elio Di Rupo uses a megaphone during a symbolic strike action of CSC Christian Union of Mons-La Louviere, in front Di Rupo's residence in Mons on Jan. 30, 2012. Belgium was in chaos today, just hours before an EU summit, with transport and other public services halted by a national strike called by unions in protest at EU-ordered austerity measures.
Credit: Virginie Lefour
Share

BRUSSELS, Belgium – Belgium's first general strike in almost 20 years brought the country to a near standstill Monday as European Union leaders were gathering in Brussels for their latest summit on the euro zone crisis.

The leaders were forced to fly into a military air base 20 miles south of the capital due to fears strikers would shut down Brussels international airport.

Trains, city buses or subway services were halted. Schools, government offices, factories and supermarkets were shut down by the 24-hour stoppage. Striking workers blocked several highways including frontier crossings into Germany and Luxembourg.

“We want to send a clear message to Europe and tell its leaders that there are alternatives to austerity,” Claude Rolin, general secretary of the Confederation of Christian Trade Unions, one of the three main organizations behind the strike.

Transport problems were compounded by the snowfall across much of the country, although the expected traffic chaos in Brussels did not materialize as many commuters stayed at home.

The Belgian unions are incensed by an austerity packaged approved by the coalition that took office in December which aims to save 11.3 billion euros off the state budget, including through measures what will effectively raise the age at which workers can retire on full pension.

However, the government, led by Socialist Prime Minister Elio di Rupo, is committed to making the cuts and he risks sanctions from the EU if it fails to stick to a program to bring the budget deficit down from last years 4.2 percent of gross domestic product to below 3 percent in 2012.

“This government has committed to get back to a balanced budget by 2015 and we have to take a certain number of measures to get there,” Budget Minister Olivier Castel told the RTBF broadcasting network. “Without the reforms put in place by this government the survival of our social security would be put at risk. It's a simple as that.”

The Unions are demanding higher taxes on banks and the wealthy and more support from richer EU nations — through the issuing of euro-bonds, which would spread out the euro zone's debt burden — as an alternative to austerity measures that hurt workers.

For EU leaders arriving for their 17th summit since the debt crisis first erupted in Greece, the Belgian strike was a timely reminder of popular discontent over the austerity measures being introduced to bring down debts. The half-day summit is scheduled to debate possible new job creation measures to complement to the cost-cutting budgets now being imposed by governments from Athens to Ireland.