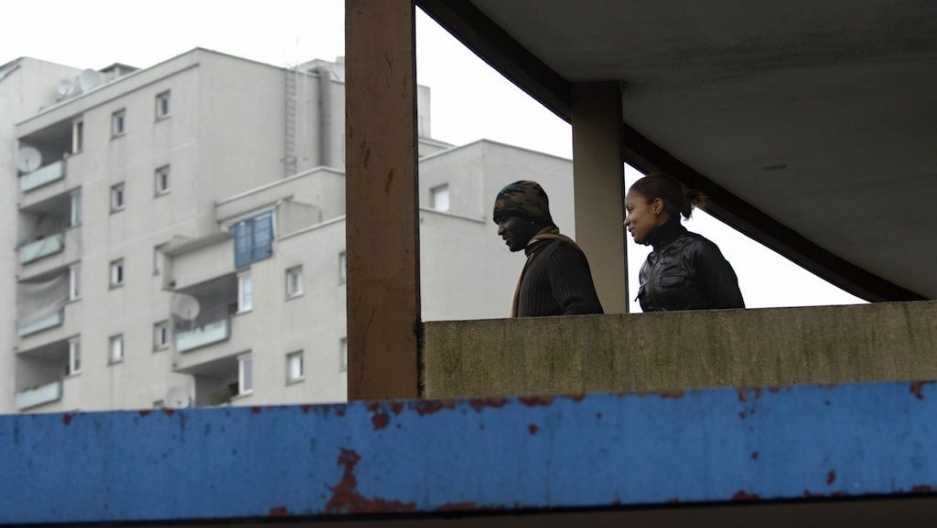 Clichy-sous-Bois, FRANCE: Young people stand next to the Maison Blanche association of the Bois du Temple housing project. Aid from Qatar could filter into Plaisir, another French housing project, if the project's application is approved by the Gulf state.
Credit: Eric Feferberg
Share

PARIS, France — “Look at the holes in the road and the paint peeling off the buildings,” said Abderrezak Kachane, the leader of a residents association. He’s walking around Valibout, a derelict housing project east of Paris in a town named Plaisir.

Ironically, plaisir means "pleasure" in French, but conditions in this suburb are light-years from the comfort and opulence often associated with the French capital.

Residents in Valibout laugh when asked how long they have been waiting for their homes to be repaired. They say elevators regularly break down, rats infest some of the buildings, and the heating is erratic. At Christmas, residents spent a week without hot water and heating because the pipes had burst.

“When we visit our relatives back in Morocco, we strut around, proud to be living in France,” said Kachane, as he stared at the graffiti inside a stairwell. “But when they come here, and see where we live, they can’t believe it.”

Since the housing project was inaugurated in the 1970s, living conditions in Valibout have deteriorated and residents, often from immigrant backgrounds, feel France has turned their back on them.

“We have no hot water and no elevators,” said Mohammed, a bus driver, who refused to give his surname. “[Local authorities] don’t care. They don’t respect us. But we are a generation who can read and write in French — we know our rights.”

While work has begun on the building rehabilitation — estimated to cost $51 million — many say improvements are behind schedule. Kachane also complained that the landlord, state-owned Opievoy, wants to increase the rent to pay back a loan for the improvements. He says residents have been contributing to reparations for years.

So Kachane appealed to the tiny Gulf state of Qatar for help.

“I read in the paper that they were launching an investment fund and I thought, why shouldn’t we benefit?” said Kachane, whose spirits soared following a notice that his application had been pre-selected and scheduled to be examined.

In December, the Qatari embassy in Paris announced it was launching a fund to help entrepreneurs in impoverished areas in the French suburbs, known as the 'banlieues.'

More on GlobalPost: Opinion: Why France is right about the burqa

“I hope we will launch a partnership that will ease relations between France and Qatar,” he said. “French citizens with Arab heritage can help us advance our partnership with France.”

The Qatari government’s move comes amid other investments in France by the Gulf state. These include the Paris football club Paris Saint-Germain, a 10 percent stake in the French-based conglomerate Lagardere, and the construction of a handful of luxury palaces, casinos and manors.

“I think it’s great, if it works,” Nicole Avonde, a local retiree told GlobalPost. “Nothing ventured, nothing gained.”

But local official Reda Derar, who is charge of community relations with the administration, said he strongly disapproves of the potential funding.

“It’s an attack on state sovereignty. We’re not a football club,” said Derar. “If Qatar gives us anything, they’ll want something in exchange.”

While Derar refused to comment on Qatar’s perceived objectives, Nabil Ennasri, president of a pressure group representing French Muslims ssuggested the Gulf state is looking to develop a network of supporters in France.

“Qatar wants to become a major player in international relations and has been very active over the past 15 years in sports, politics, media, religion and culture,” said Ennasri, a Qatar expert.

“France has a large Muslim population of Arab heritage, which will one day, whether it is welcome or not, play an important role in French politics. Investing in this population is a way of recruiting supporters who will — consciously or unconsciously — further Qatari interests,” Ensari added.

The embassy of Qatar did not respond to our requests for an interview.

Five to six million Muslims live in France, many whom can trace their heritage to former North African colonies.

Benjamin Pelletier, a writer and intercultural management trainer, said France has failed to exploit and promote the assets of this population.

“It is embarrassing to see others value and promote talents in our [suburbs].” he said. “It’s a clear sign we failed and abandoned these areas.”

Pelletier agues that as Qatar’s presence in France becomes more visible, the Arab nation needs to actively defend its image.

“In terms of public diplomacy, it is always more interesting if members belonging to the local population express your message. The French won’t believe what the emir of Qatar tells them, but they will believe the director of a start-up in the French suburbs,” said Pelletier.

The Qataris are not the first to court young professionals in the French suburbs. The US embassy in Paris has been working on a network of partnerships with youth leaders in immigrant areas to better their image with Muslim communities in the wake of the 9/11 attacks.

“The Americans target young people, youth leaders, students — they will meet them, support them, offer them trips to the United States to create long-term privileged contacts,” Pelletier added.

But he said the Qatari approach is “more opportunistic, more straightforward.”

“They know there are promising talents in the suburbs, so they approach them with frank, direct proposals,” he said.

So is the Qatari strategy paying off?

Ennasri said the Qatari embassy has been overwhelmed by the response to its initiative and is currently keeping a low profile.

The Qatari fund has not only exposed the shortcomings of the government policy on minorities, but has also attracted the attention of France’s far right, he said.

In January, far-right presidential candidate Marine Le Pen lashed out at Qatar for investing in “Muslim" areas of French cities.

“I think this situation could be very dangerous,” Le Pen said. "We are letting a foreign country choose its investments with regard to the religion of this or that part of the French population or of French territory.”

In the Valibout housing estate, Kachane denies he will promote Qatari interests if the Gulf state invests in his neighborhood. “They don’t want to buy the banlieues, they just want to support our businesses.”

But even if Qatar refuses to invest in Valibout, Kachane hopes his move will achieve something.

“The media attention will push politicians, state, regional and local officials into doing something for our neighborhood," he said.