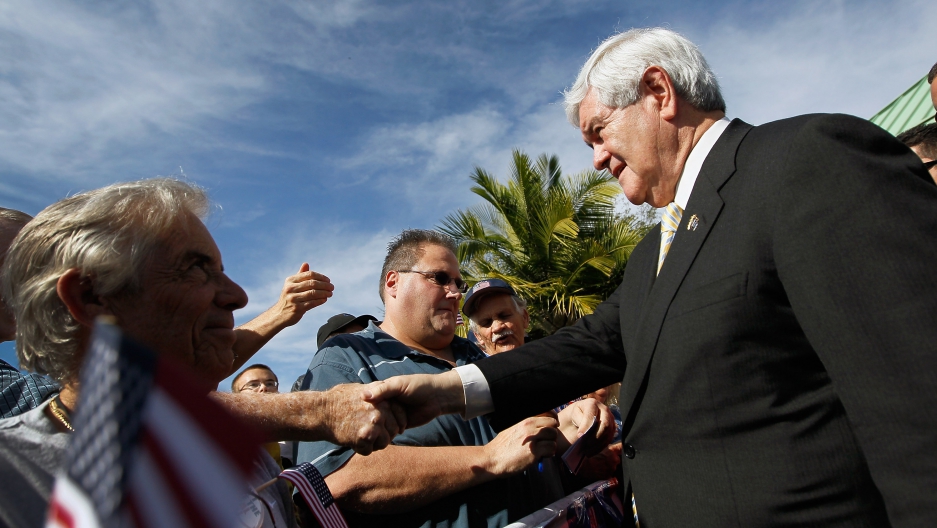 Republican presidential candidate, former Speaker of the House Newt Gingrich greets people during a meet and greet at the PGA Center for Golf Learning and Performance in Florida.
Credit: Joe Raedle
Share

ST. AUGUSTINE, Florida — “Newt Gingrich can just kiss my foot,” fumed the woman trying on clothing at Gauzeway, and upscale boutique in the impossibly quaint seaside town of St. Augustine. “I don’t like him as a person. I’m voting for Romney. At least he has some business sense.”

There was a buzz around town. The second Florida debate was scheduled for that evening at the University of North Florida, just a few miles away in Jacksonville, and everyone was intent on watching the process.

“I am very flattered that they chose Jacksonville,” said a carefully coiffed, elegantly dressed shopper who appeared to be in her late sixties. “We are much different up here than down in the big southern towns like Orlando and Miami.”

I had asked the customers in the store what they thought of the current crop of Republican candidates. It started a heated discussion.

“Well, I think Newt is the smartest, most experienced one of the bunch,” said the woman with the salon hair, referring to former Speaker of the House Newt Gingrich. “He’s got my vote.”

She conceded, however, that her husband was supporting the former Massachusetts governor, Mitt Romney.

“I just hope someone can get this economy flourishing again,” she added.

It is not difficult to get people to talk politics in Florida – everyone, it seems, has a strong opinion. But trying to get a cohesive picture of what will happen in the crucial Florida primary on Tuesday is a much more challenging endeavor.

Each contest to date has been a “first” — Iowa, the first caucus in the nation; New Hampshire, the first real primary; South Carolina, first in the South. Now it’s Florida’s turn.

With a population of 18 million, Florida is bigger than the first three voting states combined.

Because it is holding its primary before “Super Tuesday” — March 6, when ten states will go to the polls, it incurred sanctions from the Republican Party. It had to forfeit almost half of its delegates to the national convention, which will be held in Tampa in August. Florida will seat 50 delegates, rather than its allotted 99.

By moving the date up, Florida residents say they wanted their vote to count. Now it certainly will, probably more than anyone had foreseen.

Florida is the battle that will most likely identify the Republicans’ strongest candidate. Of the four men left standing, three have won primary votes. Former Pennsylvania Senator Rick Santorum took Iowa, although the news of his victory came too late to help him in the second race.

Romney was the undisputed champion of New Hampshire, but the state’s small size, and the fact that it neighbors Massachusetts, where he held office, led many to downplay the significance of his win.

In a dramatic upset, Gingrich swept South Carolina last week, shattering the conventional wisdom that Romney was the inevitable choice.

Now, unless Ron Paul, the libertarian gadfly, somehow comes from a distant fourth place to shove his rivals out of the way, one of the contestants will finally score a second win, and emerge as the frontrunner for the Republican nomination.

Because of the state’s size and large population, the candidates have largely opted out of the retail politics that have characterized their campaigns to date. There are few town halls, almost no diner breakfasts, little pressing of the flesh.

Instead, Romney and Gingrich have concentrated on expensive television time — almost $14 million so far. Romney is by far the biggest spender, concentrating on attack ads targeting his chief opponent. It may be money ill spent.

“I hate those ads," said the elegant woman. “They are beneath Romney’s dignity. He is better than that.”

More from GlobalPost: Some Democrats voted Gingrich in South Caroline

“My sweet husband, who has owned and operated two realty businesses in his life, is now working in Publix (a major food chain), and wearing a hairnet,” said my stylish companion, her eyes filling with tears. “It is so humiliating for him.”

She refused to give her name, because “getting in the paper is the kiss of death for a girl in St. Augustine.” She said she was from Alabama originally, and was trying to make it as a real estate broker in troubled times.

She is sure that her chosen candidate, “Newt,” will keep Social Security going.

Actually, Gingrich has proposed letting the states take over Social Security, and allowing taxpayers to opt for individual retirement accounts instead of the current system. Many have criticized his proposals as unrealistic.

But my interlocutor’s choice was more emotional than rational.

“President Barack Obama has to go,” she said, to emphatic agreement from the four or five customers present. “We have a saying down here. ‘Namby-pamby.’ He wants to go around apologizing, saying ‘oh, excuse me for being American.’ Well, that’s not the way things are supposed to be. Newt stands up for Americans.”

The race is winner-take-all, so one of the men will walk away with the entire slate of delegates. Florida is also the first closed primary. Only registered Republicans can cast ballots, which will prevent the crossover voting seen elsewhere.

But Romney and Gingrich are neck and neck, and the race is still wide open.

Over at St. Augustine Beach, the split was about the same.

Kim Meeks, a Vietnamese war bride who has been in the United States since the early 1970s, is a Romney person all the way.

“I think he has good business sense,” she said.

It is not hard to see why Romney’s “American Dream” rhetoric would appeal to Meeks, who worked for the Army for 30 years, and is now retired and managing a string of nail salons in Northern Florida.

“I love it here,” she beamed. “If you work hard you can have a real good life.”

He assistant, Sheryl Valentino, was not so sure of her choice.

“I’ll wait until the end, when the real truth comes out,” she said. “All I know is that Obama has to go.”

Valentino said she has a lot of friends in the military — mostly Marines who have just come back from Afghanistan.

“I do their feet,” she laughed. “They come back with terrible problems from the heat and the dryness.”

But she says her pals do not like the president.

“They are all upset about the cuts in the military budget,” she said. “They are afraid that their medical benefits will be taken away.”

Obama won Florida in 2008, but not by much: he received 51 percent of the vote to McCain’s 48 percent. Florida is the quintessential swing state, and it could be tough slog again in the fall.

Many of Florida’s residents are just trying to focus their anger, and Obama is coming in for the lion’s share.

“I voted for Newt already,” beamed the saleswoman in the Island Beachwear shop across from Meeks’s nail salon. “I filed an absentee ballot, because I am from the southern part of the state.”

Absentee voting could make up more than 10 percent of the vote; out of just over 4 million registered Republicans, more than 500,000 have requested absentee ballots. As of Friday morning, nearly 275,000 had already voted, according to local media reports.

“Because he says whatever he wants, and doesn’t care what anyone else thinks,” she said.

Obama, she added, had been a disaster. She harked back to the “birther” debate, a canard circulated during the last election that Obama had actually been born outside the United States. No amount of documentation has managed to convince some diehards.

“I think he is deliberately trying to wipe out our American way of life,” she said darkly. “I don’t know why, but all that business with the birth certificate … I’m just saying, I don’t think it’s an accident.”

More from GlobalPost: Complete coverage of the US Election