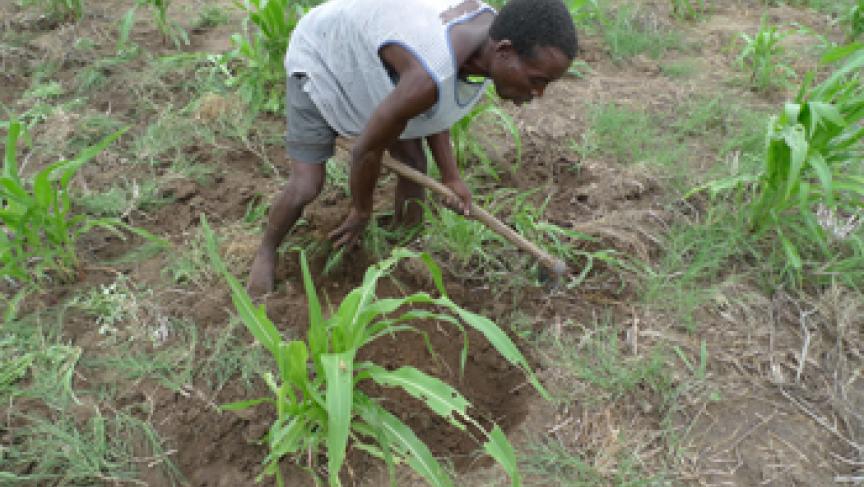 Rui Alberto Campira hoes the soil. He’s part of a group of farmers who received a grant from Save the Children to grow cash crops. (Photo by Rowan Moore Gerety.)

Over the past two decades, Mozambique has suffered more than its fair share of weather disasters.

The east African nation has seen more devastating cyclones, droughts and floods than any country on the continent. Farmers in Mozambique have been particularly hard hit. This year alone, torrential rains in the mountains sent flood waters onto fields below, submerging tens of thousands of acres of crops.

And now, farmers are in the midst of another rainy season, which started in December.

Officials at Mozambique’s National Institute for Disaster Management have to prepare for rescue operations this time of year. Figueredo de Araujo, the institute's information manager, said the emergency operations center is equipped with rescue boats as well as warehouses with various goods for humanitarian assistance: maize flour, tents, tarps, boots and rain coats among them.

Caia, where Mozambique’s main highway crosses the Zambezi river, sits in the middle of a vast, flat, floodplain that is home to nearly a million people. In 2000, the area was hit by the worst flooding in memory. The floods killed 700 people, displaced 100,000, and cost Mozambique a 1.5 percent loss in GDP through destruction of crops.

To Belem Monteiro, the emergency center's director, much of Mozambique’s misfortune is a matter of geography.

"The fact that we have a problem is not news to us: given its location, Mozambique could only be vulnerable to these changes in climate," Monteiro said.

Nearly 80 percent of Mozambican families are subsistence farmers, relying on rain-fed agriculture to produce their food. After the 2000 floods, farmers near the Zambezi River repeatedly lost their homes and crops.

"In the past, it happened every five years, now we have annual emergencies, which shows that the situation has changed," Monteiro said.

But that's presented a major challenge for the disaster management institute, which was conceived to intervene during freak emergencies, but has been forced to evolve to a permanent mission.

Some 30 miles from Caia, a resettlement zone called Tchetcha Um is home to some 5,000 families who were moved to higher ground. The organization Save the Children has partnered with the government in a program promoting livelihood resilience, diversifying their income sources, said Clemente Lourenço, a project officer for the group.

Farmer Rui Alberto Campira received a grant from Save the Children in 2009, which enabled he and 11 other farmers to built a 5-acre farm where they can grow crops for both consumption at home and sale at the local market. Campira says the soil is great for cash crops.

"It's good. Especially for tomatoes. Tomatoes, onions, cabbage, collard greens. That's what we usually plant here. There we only plant maize. Maize and sweet potatoes," Campira said of his former home.

The land he's farming now will also flood during the rainy season, but the irrigation system the grant enabled him to install allows him to farm during the dry season, when cash crops would typically die.

About 55 associations like Campira's have formed in Caia district, not just growing cash crops, but trading in fish, beans, and clothing, and using animal traction to plow fields. Save the Children funds about 4500 farmers across three provinces.

Joao Novage is raising seven goats, as part of another association. The grant originally bought 40 goats that have in turn born another 20.

"When I see that I have 12 or 13 goats, I’ll take four and sell them to buy school supplies and clothes for my children. Children are our wealth. They’ll bring a better future for us," Novage said.

Though the projects have been wildly successful, everyone admits they serve an insignificant portion of the population at this point. It remains to be seen if they can be expanded to make a measurable difference in the unger and poverty around this portion of east Africa.