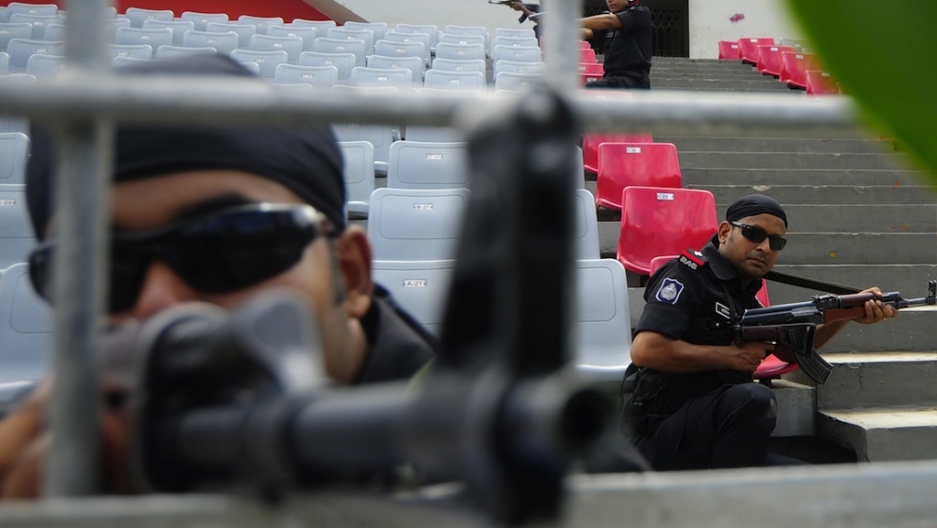 Members of the Bangladeshi Rapid Action Battalion (RAB) run through a security drill in the Bangabandhu National Stadium in Dhaka on September 4, 2011. Argentina and Nigeria, two of the powerhouses of international football, are expected to play an exhibition match at the stadium in Bangladesh on September 6, 2011
Credit: MUNIR UZ ZAMAN
Share

DHAKA, Bangladesh — “Is there a force in the world fighting armed terrorists who can guarantee there will be zero casualties?” asked Mohammad Sohail.

The question is obviously rhetorical. Sohail is a commander of Bangladesh’s Rapid Action Battalion, better known as RAB. Depending on whom you ask, the elite paramilitary force is either a killing machine, or a useful and necessary killing machine.

RAB has admitted to killing at least 622 people since its formation in 2004. Rights groups put the number closer to 1,000.

If that is the case, then they are now a US-trained Latin American-style death squad.

American diplomatic cables released by Wikileaks revealed that in 2008 and 2009 embassy officials in Dhaka were worried about the force’s record of human rights violations. But the State Department decided to work with them anyway.

The US has focused on human rights training for now. Part of the reason for the engagement is because US officials view RAB as their best prospect for a partner in counter-terrorism operations in Bangladesh. Even detractors admit the force has been successful in stemming the tide of Islamic terrorist activity in the country.

The other driver, however, is RAB’s own desire to rectify what it considers to be a misrepresentative public image. The cables expressed the view that there was strong support within RAB for the human rights training.

On Jan. 18, 2011, a day he claimed as a turning point in RAB’s history, US Ambassador Dan W. Mozena addressed the graduates of a five-week training program that established an internal inquiry wing to probe RAB’s human rights violations.

You, said the American ambassador to the 19 cadets, are the key to changing how RAB is seen.

Image has always been an integral part of the RAB setup. They are quick to stress the “elite” part of “elite paramilitary force.” RAB’s members are drawn from the army, navy, air force, police force and border guards.

“We only consider the best from them, and we only pick the very best of the best,” said Sohail.

RAB takes this Men in Black ethos literally. They are an intimidating and visually striking sight, men and women patrolling the streets of Dhaka armed with assault rifles while dressed in all-black from the boots up to the bandanas and of course, sunglasses.

Sohail himself comes from a navy background. The head of RAB’s Media and Legal wing, he spearheads the task of shedding the “death squad” tag.

He insists that what shows up in the media and on talk shows does not reflect ground reality.

“The challenges in a country like Bangladesh are huge,” he pointed out. “The law and order situation in 2004 was beyond control, a terrifying situation. Militant groups, drugs spreading everywhere, Dhaka was completely run by five to seven Mafia bosses.”

Sohail highlights the difficulties they face in the more inaccessible parts of the country such as the Sundarbans, the sprawling rainforest in the south of the country.

“Take the dacoits [robbers and traffickers] in the Sundarbans. We don’t know the area, they do. They are also desperate to avoid being arrested.”

Around 8,500 RAB personnel cover the whole country, which has a population of around 150 million. 34 RAB members have been killed in action since 2004, and over 400 injured.

Street justice vs. no justice

“I think people feel safer because these guys are around,” said Nicolas Haque, Al Jazeera’s correspondent in Bangladesh.

The public’s reaction to RAB doesn’t neatly fit the reaction one would expect from a term like “death squad.”

“I like RAB,” said an American expatriate working in Dhaka.

“I mean, I don’t LIKE them, but you know,” he clarified, implying he doesn’t approve of all their methods but appreciates what they’re doing.

It isn’t just those living in the capital who feel this way. The leaked diplomatic cables note that people in remote areas, particularly women, feel more comfortable coming forward to RAB.

“RAB enjoys a great deal of respect and admiration from a population scarred by decreasing law and order in the last decade,” said one cable, quoting civil society sources.

“The saying in Bangladesh is that there are people who are actually above the law,” said Sultana Kamal, the director of Ain o Salish Kendra (ASK), a human rights group based in Dhaka.

“For people who think they’re above the law, RAB is an interesting factor to think about,” Al Jazeera's Haque said.

“We have a system with such a huge backlog, a backlog of 10 years of cases that have not been tried,” he added. “One case that made me really angry was a story we were doing. A child had acid poured on her ear, and the culprit, her father, was free. We went to the Home Ministry and the cops, and no one wanted to do anything about it.”

One US cable observed that members of civil society were prepared to accept that “some notorious individuals will die in encounters with RAB,” and that this was preferable to risking the court process.

Kamal and ASK do not belong to this group.

“Our problem is with the way the crime situation is dealt with by RAB,” said Kamal. “In our constitution there are definite directives on how to go about this. The way RAB was dealing with crime was extrajudicial, and not permitted in a civilized society.”

The extrajudicial deaths, which RAB usually presented as being the result of crossfire, eventually took its toll. Newspapers implicitly mocked the explanation put forward for deaths by always using quote marks around "crossfire."

“No one believed they happened in shootouts or crossfire,” said Kamal, “everyone knew these were instances of direct killing. They believed this was the only way to deal with crime. But now there is quite a lot of opposition to it.”

“I got a phone call from RAB,” Alam recalled, “It was a Col. Sohail or something. He said that it would not be good to go through with the exhibition. He strongly recommended we don’t go through with it."

The gallery was shut down before the exhibition was due to open, and protesting the clampdown became a popular cause. A further blow to RAB’s image was dealt with the shooting of Limon Hossain, a 16-year-old student Sohail says was the lackey of a local mobster.

Kamal says that extrajudicial deaths are rarer now, but that forced disappearances linked to crime and politics are on the rise.

RAB is in the strange situation of being a popular entity that is at the same time a stigmatized one. The result has been a new level of opening up to the media and a process of re-branding.

According to Sohail, the media acts as one of its biggest sources. RAB reciprocates, staging theatrical press conferences when it makes arrests where reporters get to confront those accused for the benefit of live television.

At one such press conference, following a narcotics bust, Sohail himself approached the detained man. “Do you deny that this is a drug?” he thundered, holding up a packet of Ya ba, a popular methamphetamine, to the face of the arrested man.

“I was really surprised, happily surprised to be inside RAB headquarters with crime correspondents questioning the RAB with the US and UK diplomats right there,” said Haque. “Before there were only one or two outlets to deal with, but now there’s so many broadcasters that RAB is more open to questioning.

“They [the media] were talking about the case of Limon, raising really strong journalistic questions without any fear.”

Mohammad Sohail, the RAB commander, is a religious man, and he interrupts the interview for his afternoon prayers. He leaves to wash himself, and after returning rolls up his trousers, rolls out a mat, and prays on the floor of his office.

“Look, I pray,” Sohail said after he’s done. “And I’ve gone to Hajj [in Mecca]. You can have ideology. But when you impose …”

In 2004 when RAB was formed, Bangladesh was experiencing a rise in Islamic militancy. The Far Eastern Economic Review, along with the Wall Street Journal, published articles identifying Bangladesh as a “cocoon of terror.”

RAB reacted swiftly. It took the US nearly 10 years to capture Osama bin Laden; it took RAB a little more than six months to collar Bangla Bhai and Shaykh Abdur Rahman, the masterminds behind the August bomb plot.

“Since 2004, we’ve arrested 104,000 people, confiscated more than 10,000 illegal firearms, all foreign made. These people were killing daily. Law and order was a mess. We changed this, otherwise Bangladesh could be like Afghanistan or Pakistan,” said Sohail.

Considering the state of those two countries, the US sees RAB as a valuable ally in counter-terrorism. American diplomats think that RAB could develop into a South Asian equivalent of the FBI.

Sohail disagrees, saying: “We can do better than the FBI.”