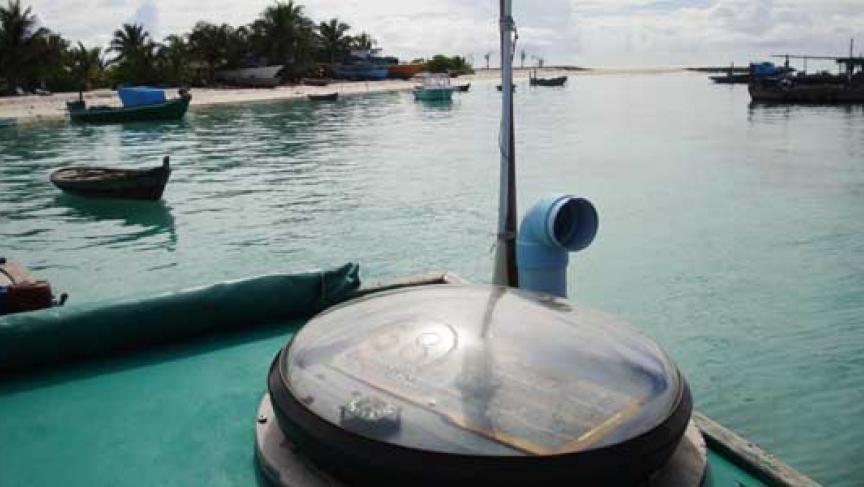 This solar panel on a boat is used by local fisherman to power their cell phones and radios while they're out on the water. (Photo by Lily Jamali.)

The tiny Indian Ocean country of the Maldives is working on a very big experiment: It’s aiming to be carbon neutral by the year 2020.

The Maldives is ground zero when it comes to climate change. It’s the lowest lying country in the world with an average elevation of just 1.5 meters above sea level. And if global carbon emissions continue unchecked, much of the 1,200 island archipelago could be underwater by the end of this century.

So the Maldives wants to lead by example in hopes that others will follow suit.

Diesel engines drive almost everything in the Maldives, from the ferries that run between the country’s islands to the electric generators that provide power to its 350,000 citizens. This island nation spends fifteen percent of its GDP on diesel.

But the government of the Maldives is hoping to change that. On an island at the southern tip of the Maldives, a metal tower equipped with small wind turbines rises hundreds of feet above the sand .

“This is called a wind resource assessment tower. And it will constantly monitor the direction of the wind, the speed, and all sorts of information is collected,” said Ahmed Zareer, the chairman of the local power company that is trying to determine whether a wind farm makes sense here.

Until now, data on renewable energy resources here has been slim. But research and investment into renewables has been growing since the country’s president declared two years ago that the Maldives would go carbon neutral by the year 2020.

He said it’s possible for the Maldives to quickly squeeze carbon-based fuels out of its economy. The challenge has special resonance here, with the possibility of the country being lost by the end of the century.

Nasheed said it’s important for the Maldives to set an example for the rest of the world. But the effort isn’t just about the environment.

“For us this is an economics issue. it’s a financial issue. We are becoming carbon neutral because it is cheaper than fossil fuels,” said Nasheed.

Or, at least Nasheed hopes it will be in the long run. For now, the transition to cleaner energy means investing between roughly $3 billion and $5 billion. Zareer said one of the big challenges is dealing with the high upfront cost of switching to renewables.

“When cities, people and countries develop, you have to pay a little bit of a higher price. We’re trying to adjust these prices to be very minimal,” Zareer said.

The effort includes researching which technologies are best for different parts of the country and then deploying them as cheaply as possible. The government is also offering incentives to citizens willing to invest in renewables.

And they’re turning to innovative techniques like crowdsourcing for ideas on how best to deal with some of the country’s energy challenges. They’ve been spurred to do that in part because, cost aside, the switch to renewables here will be complicated.

Solar panels can corrode in salty marine environments like this. Space is at a premium on many of the country’s tiny islands. And in most of the country, the wind only blows a few months a year. But the biggest challenge could be domestic politics.

President Nasheed is the Maldives’ first ever democratically elected leader. But much of the country is unhappy with his record so far and anti-government demonstrations are increasingly common. Many who support the president’s energy goals say his clean energy plan won’t succeed without strong domestic political support. Sonnu Srivdasani's Six Senses resort company is also aiming to make its properties carbon neutral.

“I think initially his promotion has been very global,” said Srivdasani of President Nasheed. “…underwater cabinet meeting that’s shown around the world, and quoted on CNN. So that’s really what he’s been doing so far. But he’ll need the support of every individual Maldivian if we’re going to meet the target.

But shoring up Nasheed’s political support has sometimes meant making decisions that undercut his energy agenda. Among other things, he’s maintained an energy subsidy that keeps prices down but also reduces the incentive to use less.

And to keep up with current demand for electricity, the president is sticking with a plan inherited from the previous president to build a new diesel-fired power plant. It’s a difficult balance in a place that’s already on the edge.

The threat from rising sea levels is clear on the island of Guraidhoo, where environment official Mohamed Zahir pointed a group of international visitors towards a patch of eroded shoreline.

“99 percent of the Maldives is reporting to the environment ministry they are having erosion problems,” Zahir said.

Erosion – always a problem – has gotten much worse in recent years. Residents say water laps closer and closer to their homes each year.

Of course, what happens here in the Maldives will make only a tiny difference in global carbon emissions. Changes in say China or the United States — the world’s two biggest emitters — would matter a whole lot more.

But President Nasheed said that where he intends to lead the Maldives ... the rest of the world will follow.

“We are 99 percent sure that we will be carbon neutral by 2020. And I believe that it’s not just going to be us. The economics will drive other countries also to do the same,” said Nasheed.

In fact, since Nasheed announced his goal two years ago, other countries – including Norway, Ethiopia and Costa Rica – have set similar goals.