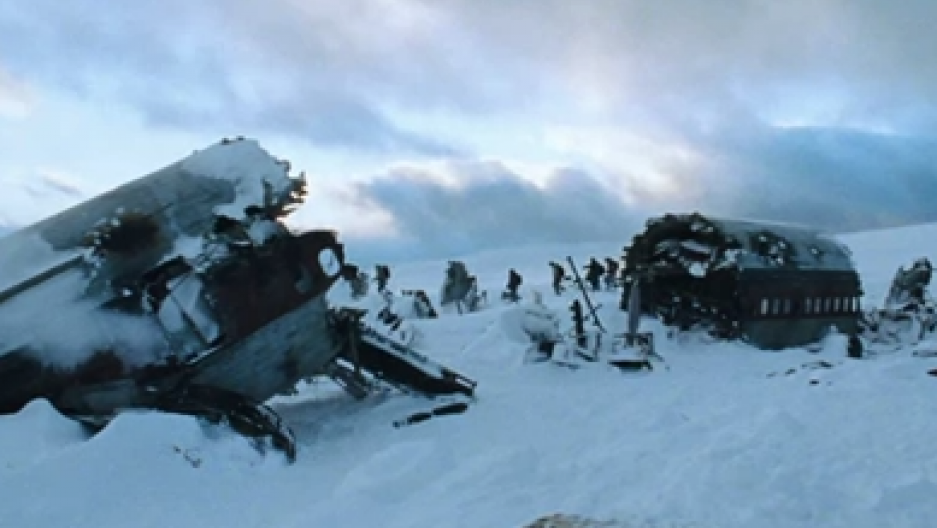 The Gray takes place after a bad plane crash strands a group in the Alaskan wilderness, where they must fight and evade a wolfpack to survive. (Photo courtesy of Open Road Films.)

It's the time of year when major action thrillers dominate at the box office and this weekend will be no different.

Two new action movies, "The Grey" and "Man on a Ledge" are both out in time for weekend moviegoers to check out.

Liam Neeson makes his returns to the big screen in Grey, an icy survival flick. Kristen Meinzer, culture producer for the Takeaway, describes it as a hyper-realistic survival movie, set in Alaska's wilderness.

"A plane crash. Wolves. People bleeding to death and getting mauled to death," Meinzer said.

Guzman said while parts of the film are incredibly brutal, it's also bizarrely sentimental.

"It didn't really work for me," he said. "I couldn't quite figure out what the movie was trying to do."

The film focuses on the journey the plane crash survivors endure, trying to find their way out of the wilderness while avoiding a pack of wolves.

"But I found them totally terrifying," Meinzer said. "The movie was so anxiety-inducing that toward the end I actually had to leave, because it was too hyper-realistic and scary for me."

In terms of Ledge, Sam Worthington stars as a man who climbs out on a skyscraper ledge because, he says, he's ready to die.

Guzman said the hope is the situation the star finds himself in will build tension for the audience. Of course it's not really a simple, do-I or don't-I plot. There's a diamond heist and a man wrongfully convicted of a crime, trying to clear his name all wrapped into the ledge.

Meinzer, on the other hand, said the movie was so bad, it was good.

"It was loaded with cliches, really thin characters, explosions, we have the woman in a bra, we have the men on the ledges — I thought it was really good fun," Meinzer said. "You just can't go in thinking it's going to be something big."

Both movies are in theaters this weekend.