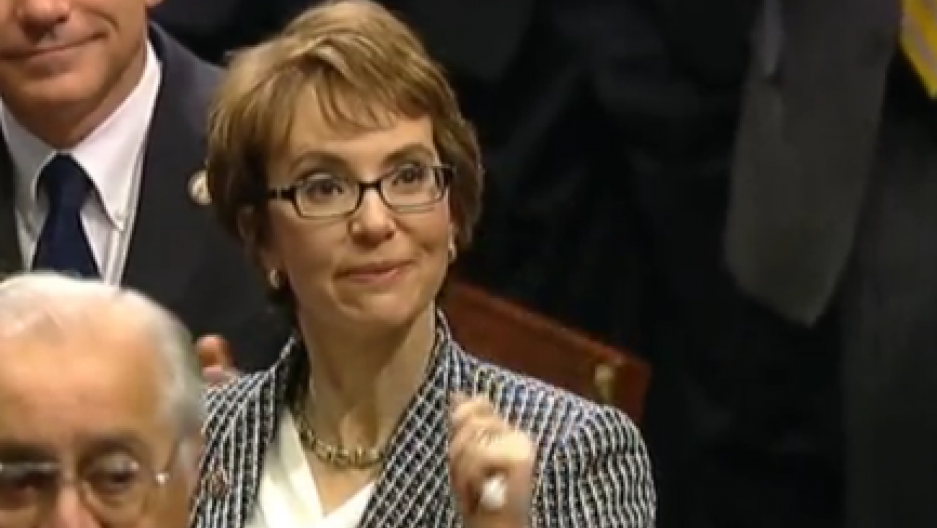 Rep. Gabrielle Giffords prepares to tender her resignation from the U.S. House of Representatives on Wednesday. (Photo from AP video.)

Colleagues of Gabrielle Giffords, Republicans and Democrats alike, bade a fond farewell to the Arizona congresswoman who was shot, nearly killed, at an official event in Tucson last year.

Giffords, who has spent much of the last year relearning how to speak and walk, decided that she needed to focus her energy on her recovery, and it wasn't fair to her constituents to ask them to forgive her absence another year. So Wednesday, Giffords delivered a letter to House Speaker John Boehner, announcing her resignation from the House of Representatives. A tearful Boehner received the letter and embraced Giffords, who was helped to the top of the podium by her friend Rep. Debbie Wasserman Schultz, of Florida.

A wave of applause greeted Giffords, the Washington Post reported. Members of both parties, in a rare display of partisan unity, offered tributes to Giffords and her service.

“We come to the floor today, colleagues of Congresswoman Gabby Giffords, to salute her as the brightest star among us, the brightest star Congress has ever seen,” said the House Democratic leader, Representative Nancy Pelosi, according to The New York Times.

“We are inspired, hopeful and blessed for the incredible progress that Gabby has made in her recovery. Gabby’s courage, strength and her downright fortitude are an inspiration to all of us and all Americans.”

In all of the speeches, colleagues and Giffords herself left open the possibility that she would seek a return to public service, once her recovery is further along. And, in a sign of respect for the departing Giffords, Republicans and Democrats joined to unanimously pass a bill that Giffords has been working toward for years.

"Within minutes after the tributes to Ms. Giffords, the House, by a vote of 408 to 0, passed a bill she introduced this week to combat the use of small light aircraft in the smuggling of drugs and contraband across the border," the Times wrote.