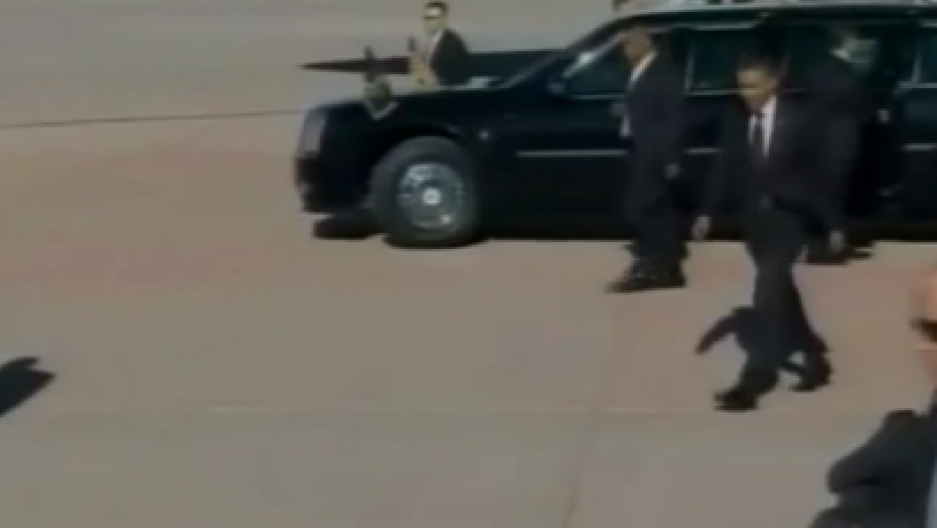 President Barack Obama prepares to work the crowd after a tense exchange with Arizona Gov. Jan Brewer at an airport near Phoenix. (Photo from AP video.)

President Barack Obama went to Arizona Wednesday to continue his effort to spread the message from his State of the Union address, but also to begin his campaign for re-election.

He was greeted by Arizona Gov. Jan Brewer, as well as local mayor. Brewer, who published a book six months ago with an unflattering portrayal of a meeting she had with Obama shortly after he took office, asked for another meeting — though this time she wanted to talk about jobs and Arizona's economic recovery, various media outlets reported.

According to the East Valley Tribune, Obama said he took issue with her portrayal of the last time they met.

""He was a little bit disenchanted about how he was portrayed,'' Brewer said to the Tribune.

The White House confirmed that Brewer and Obama discussed hey portrayal of the meeting in her book, Scorpions for Breakfast.

"But Obama did note that after their last meeting, a cordial discussion in the Oval Office, the governor inaccurately described the meeting in her book,'' a White House statement said.

One official said Obama took particular offense to beind described as "not cordial."

During the meeting, which at times looked intense and animated, especially on the part of Brewer, Brewer handed Obama a hand-written letter.

According to the Associated Press, the letter was an invitation to return to Arizona for lunch and a tour of the border. Obama indicated he was willing, the AP reported.